From one side of Malaysia to the other, we flew from Kuala Lumpur on the west coast of the peninsular to Tawau in Sabah, the eastern province of Malaysian Borneo. The attractions in Sabah are all natural and we had a week to see the coral reefs and the rainforest. First up was a trip to the reefs – we had a 4 day, 3 night trip to Mabul booked with Scuba Junkies, with a night in mainland Semporna either side. From Mabul I’d be able to dive at Sipadan Island, a place which is usually at the top of most ‘World’s Best Dive Sites’ lists. Needless to say I was excited! 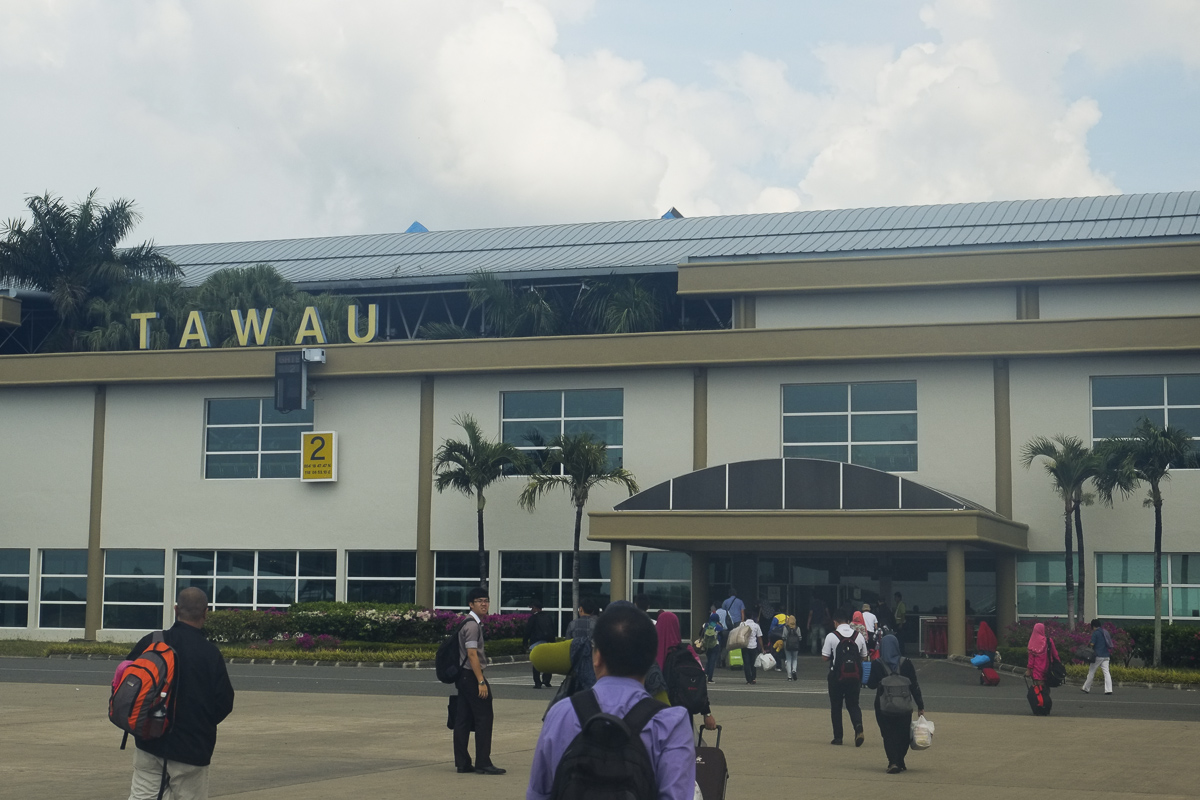 We were picked up from the airport and driven  over to Semporna. The uneventful drive took about 2 hours and in that time we got a big impression about the palm oil problem in Borneo. If you aren’t aware, enormous tracts of land have been cleared of the indigenous rainforest and are now palm farms devoted exclusively to the production of palm oil. This practice has caused a near-catastrophe in the rainforest ecosystem, with small amounts of protected national park the only refuge for the thousands of species which call Borneo home. Palm oil is present in a huge number of products and cosmetics now and I would urge everyone to try and avoid it where possible (although it’s bloody difficult!). 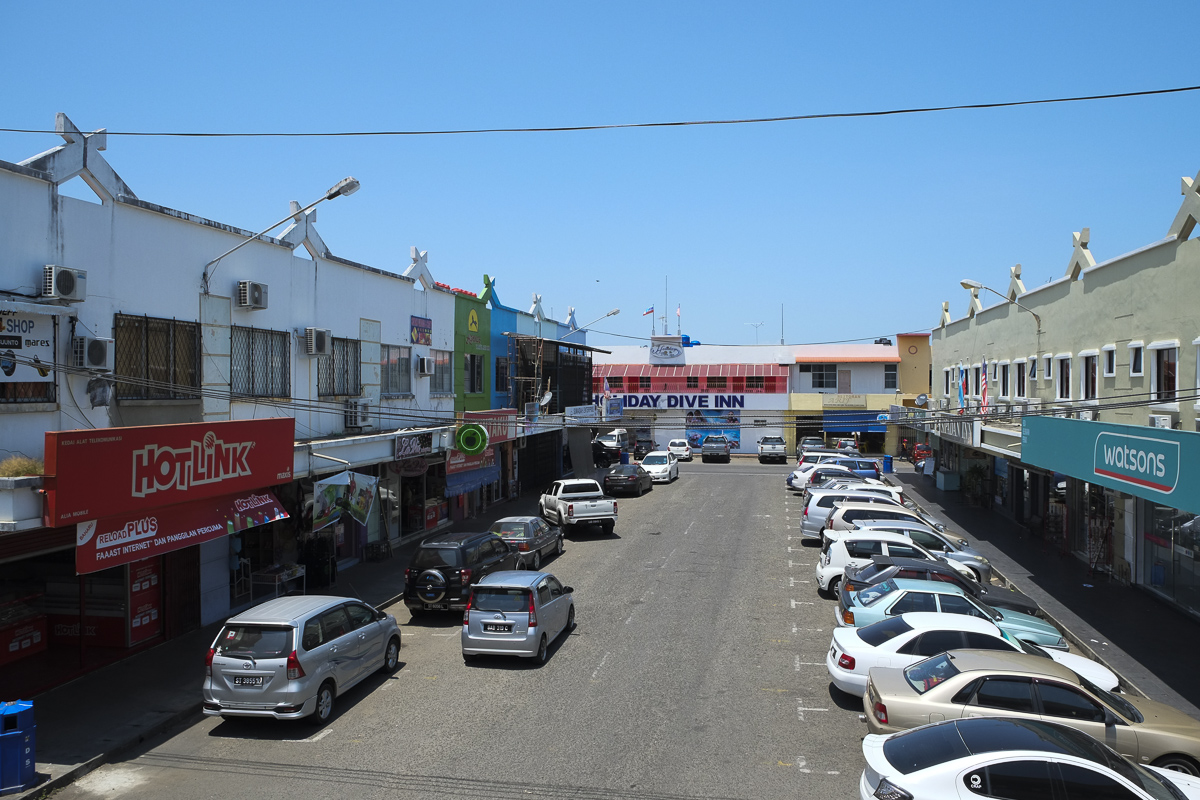 As nice as Semporna ever looks.

Suitably depressed we arrived in the less-than-impressive Semporna. A dirty concrete town with nothing to boast of except the offshore beauty. If you ever have to go, spend as little time as possible there. Staying out on Mabul might be a lot more expensive but it’s really worth it. We checked in with Scuba Junkie and spent one night in their Semporna hostel before our onward trip to Mabul the following morning. There is at least a pharmacy, supermarket and a few restaurants on the main drag including a tasty cheap roti place where you can get a cheap, authentic meal. 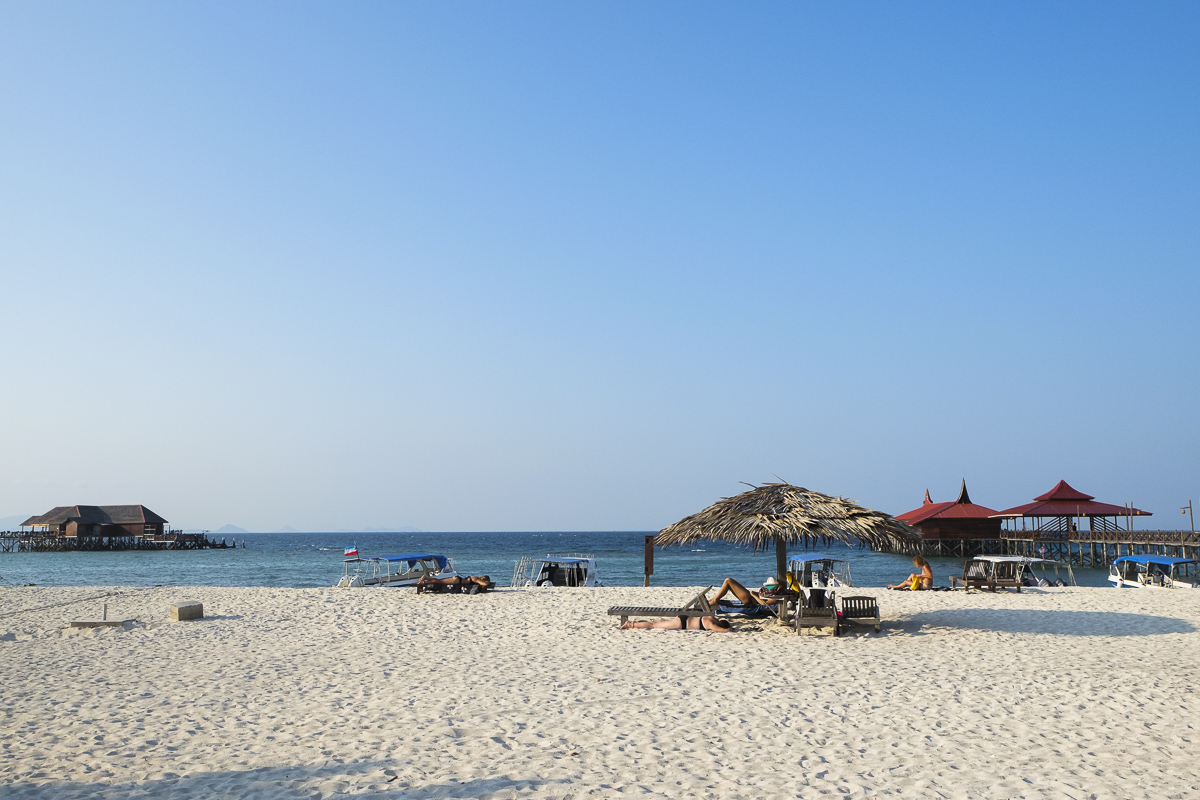 The next morning we were up bright and early for our speedboat transfer to Mabul and once we were out there everything got infinitely better. The Scuba Junkie resort on Mabul was superb – all our dive gear was sorted and saved so had the same stuff each day. There were 3 meals a day included, all buffet style with plenty of choice and quality. An upstairs bar was the social hub with a reasonably priced bar and loads of seats, sofas and cushions – the perfect place to fill in your logbooks after a full day diving! We stayed one night in the dorms and two in a private bungalow. The dorms were really nice with 3 bathrooms for each 8 bed dorm and fans to keep the heat at bay. The private bungalows were even better with private verandas and hammocks as standard. 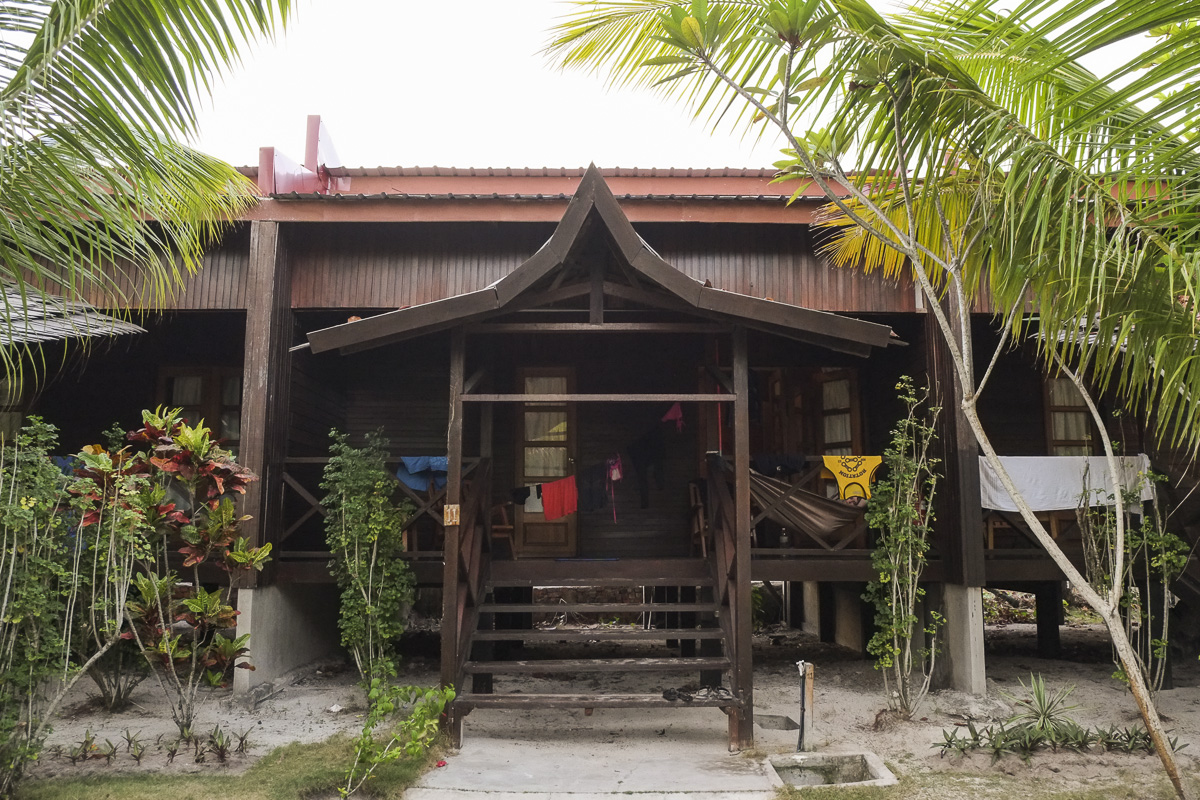 Away from the resort the undersea adventures ranked amongst the best days of our entire trip. Minutes into my very first dive at Mabul I saw a huge 3m+ eagle ray and from there we saw turtles and fish galore. This is what you picture when you think of coral reefs from TV documentaries. 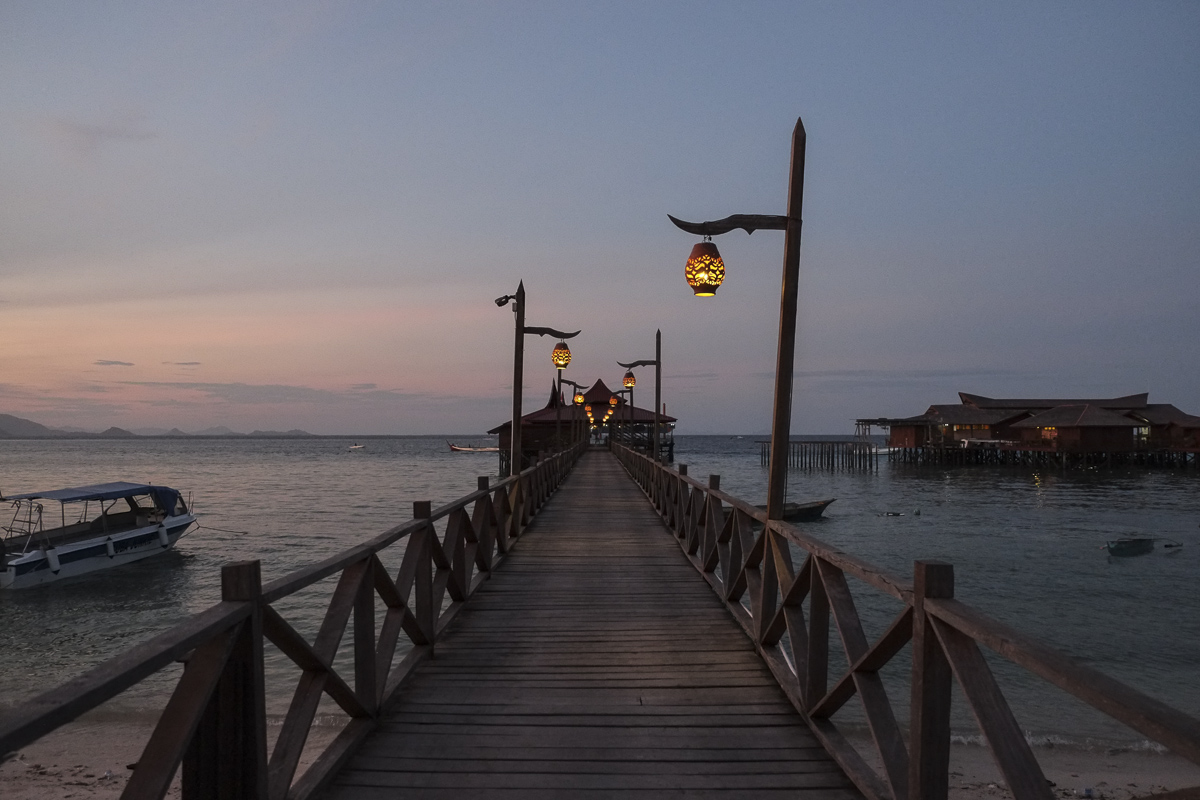 After diving just around Mabul for the first day, we took a short trip to Kapalai for our first dives of Day 2. Kapalai is home to a super expensive resort, but isn’t even officially an island as it is completely submerged at high tide. The sand slopes down to around 24m where there is an artificial reef that has been created by submerging various structures including cabin frames from the resort above. The result is an eerie sunken village becoming established as a busy and diverse marine habitat. Amongst the many species we were lucky enough to see the beautiful but tiny ornate ghost pipefish – how the divemasters can spot such a small and cryptic creature is truly amazing. 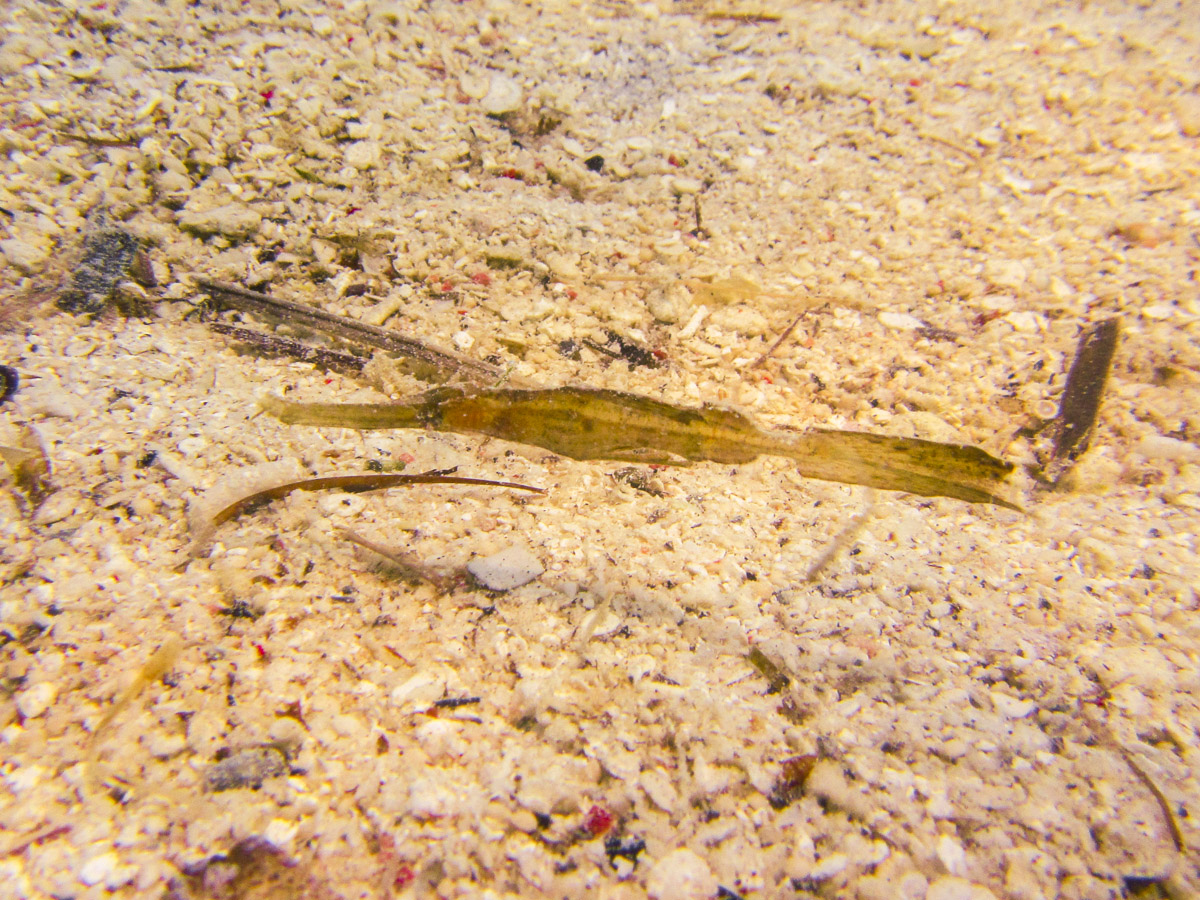 For our other dives of the day we went back over to Mabul. Our final dive was pleasantly different from what we had been doing. Our divemaster Simon took me and two others out to explore the sandy bottom just in front of the Scuba Junkie resort. We hit the bottom and just started looking around, not really knowing what we might see. Only a few minutes in we saw a huge cuttlefish laying eggs in a sunken palm trunk, from there we hit a few small shipwrecks too which looked awesome: On land I really dig cool dilapidated abandoned buildings and now I’ve developed a real love of sunken shipwrecks too. 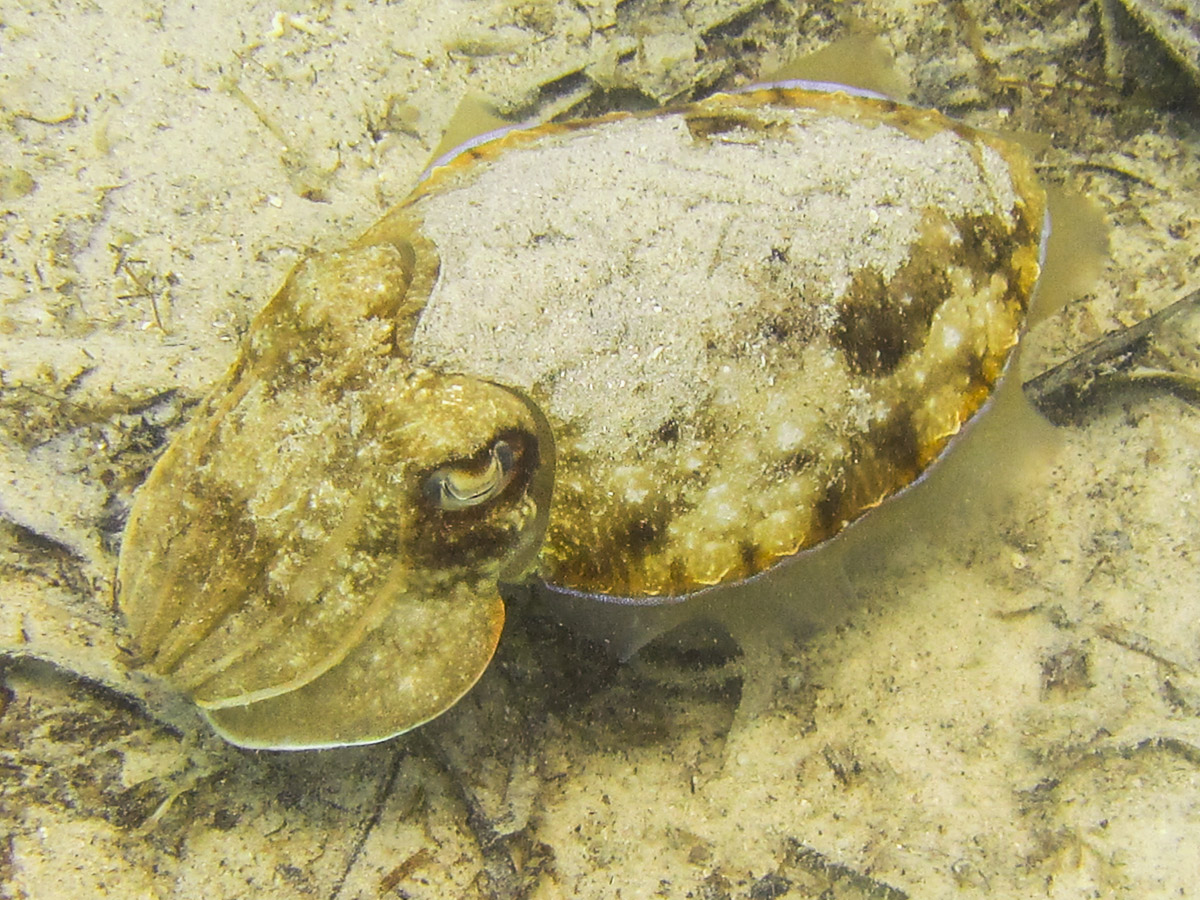 Day 3 of diving was the one we had all been waiting for: Sipadan! Unlike the other islands in the area – around which the sea depth is around 200m – Sipadan is a seamout which rises around 2km from the deep ocean floor. It’s unique oceanography results in bigness: BIG fish, BIG shoals and BIG coral. It is a challenging island to dive as the currents can be very powerful but there are guaranteed sharks and turtles galore and it’s quite common to see hammerhead sharks in the area (although we weren’t so lucky). We managed to see huge shoals of barracuda and jackfish, white tip and grey reef sharks and so many turtles I lost count. I wasn’t diving with a camera but was lucky enough to steal these shots from my dive buddy Carly – cheers mate! 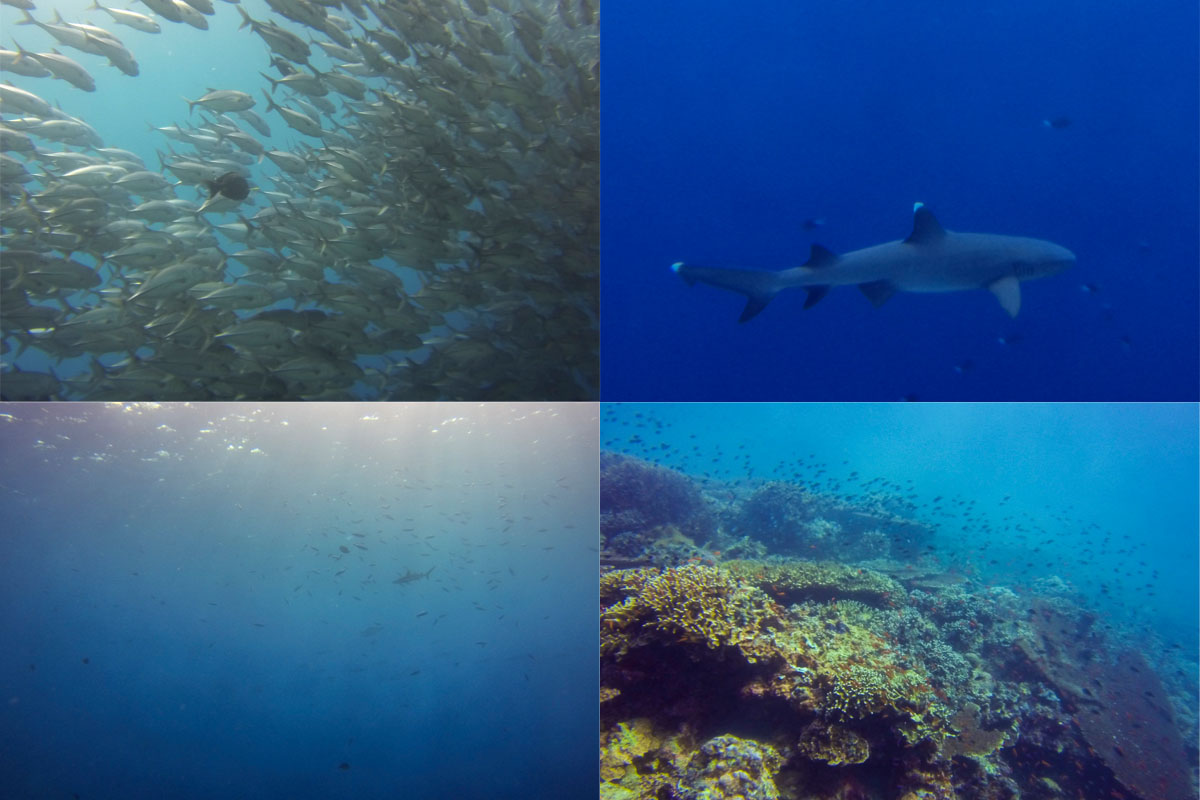 Day 4 was our final day. I was finally confident about my diving ability and so, having no underwater shots of my own, I rented a camera from Scuba Junkie to take to our final destination, Siamil. Siamil is a stunningly beautiful tropical island occupied only by a small Malaysian navy outpost and a population of monkeys. It’s also on the easternmost border of Malaysia – the next islands along belong to the Philippines. Siamil offered a different kind of diving to the reefs of Sipadan, but still exciting. The sandy bottoms are ideal for muck-diving – essentially exploring areas looking for small creatures that you might normally miss. At a first glance our final dive at Siamil looked really boring but we ended up seeing loads of cryptic and weird things: cuttlefish, pipefish, leaf fish, scorpionfish – absolutely superb stuff! 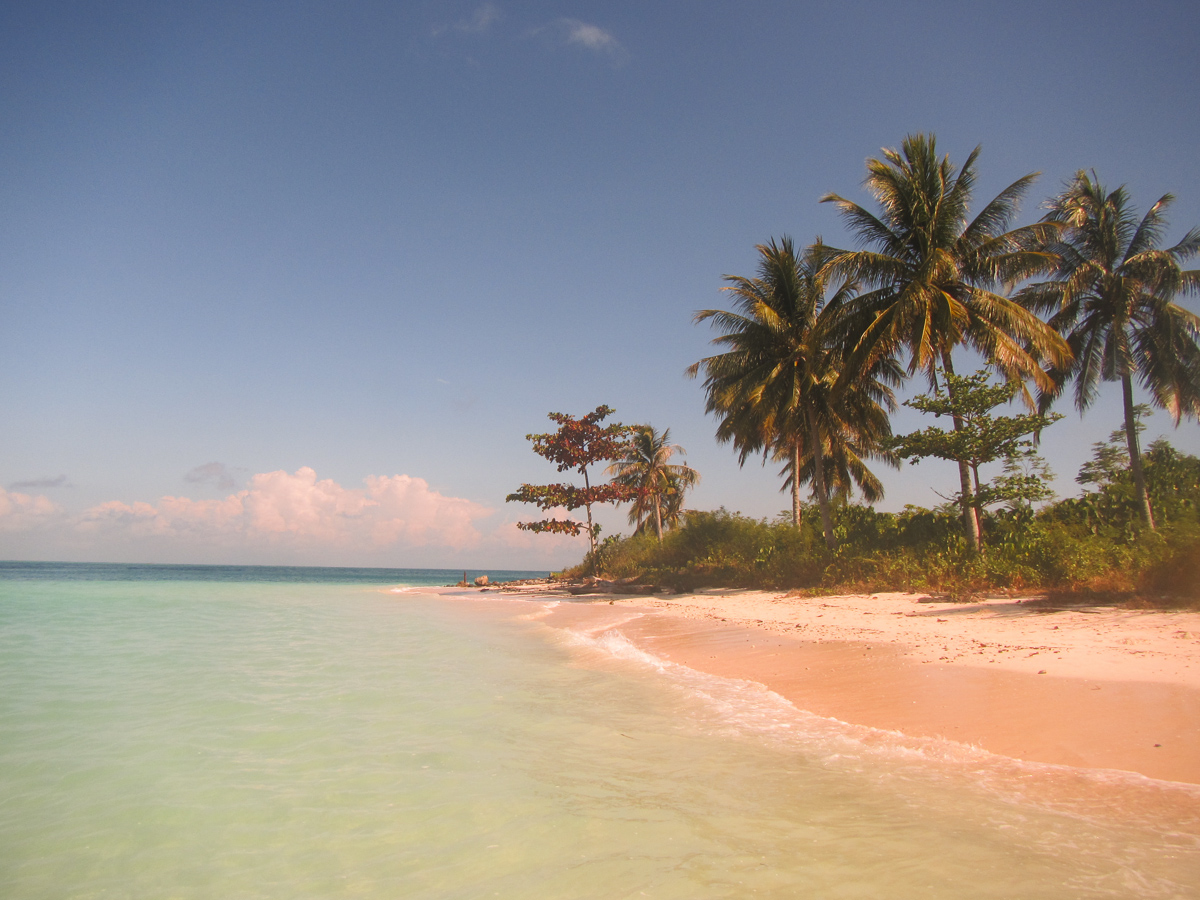 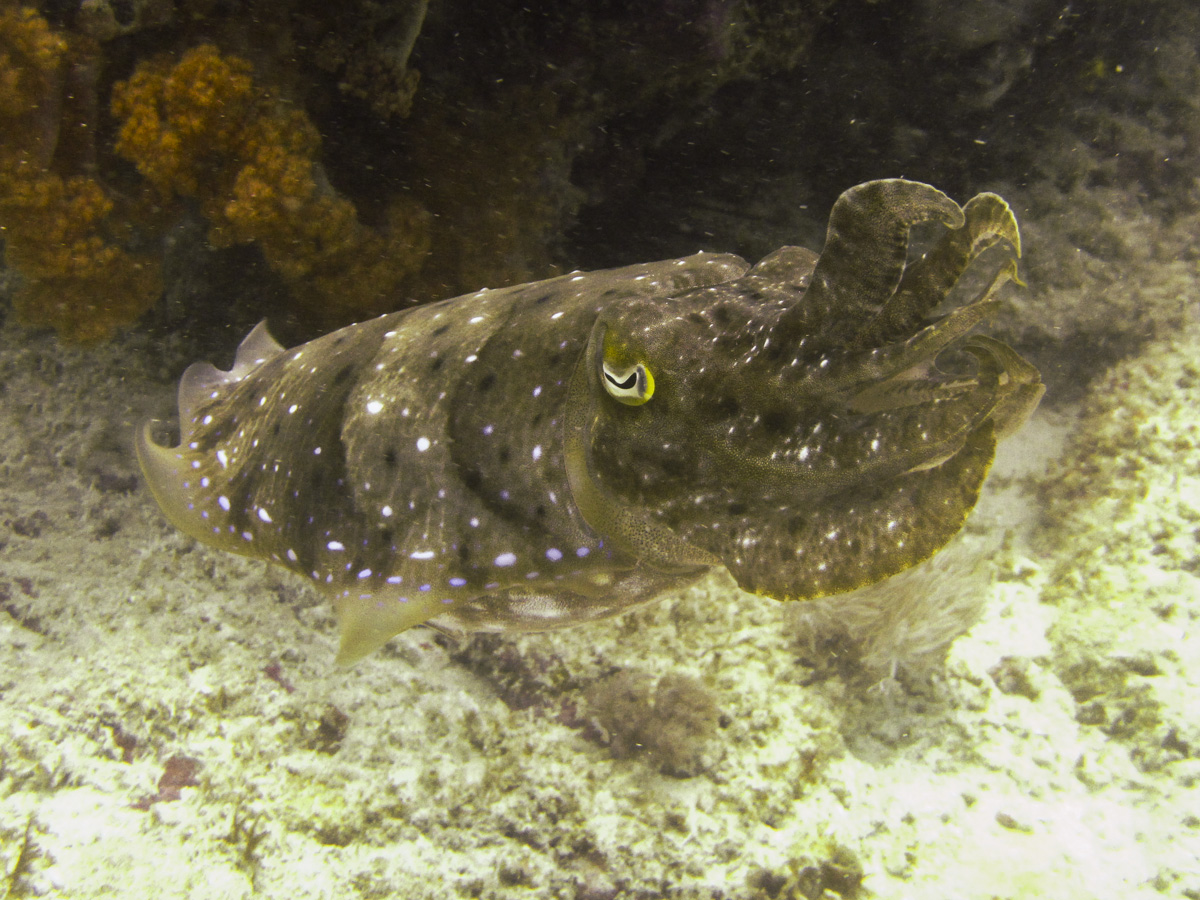 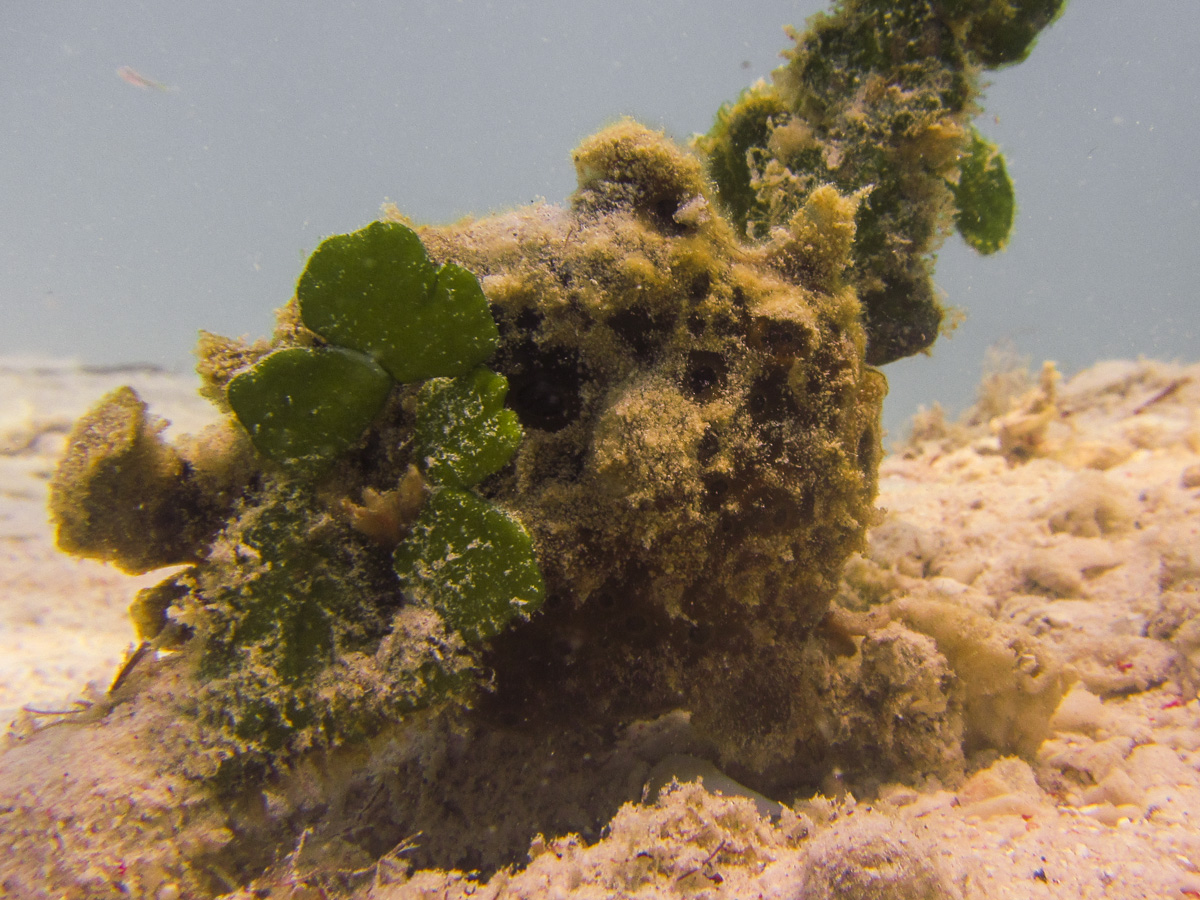 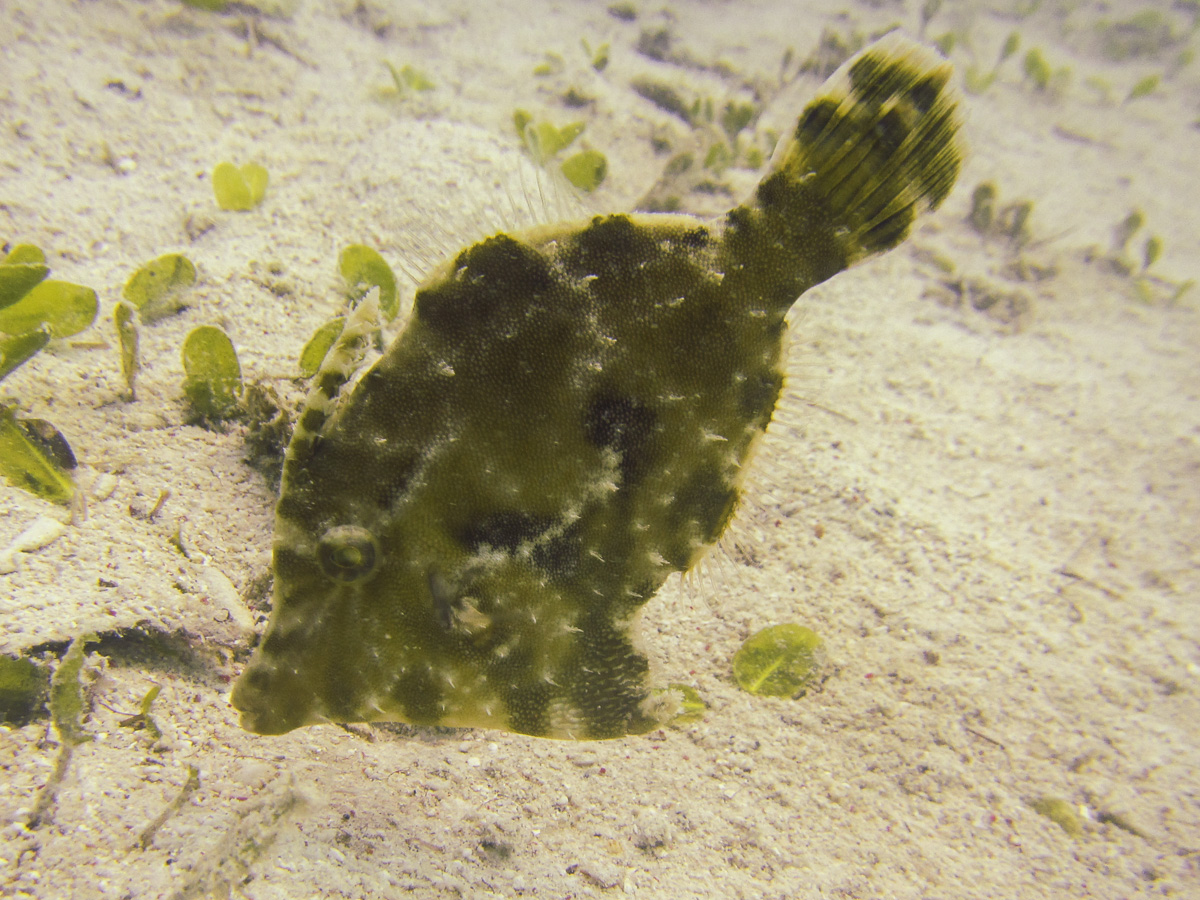 After diving Siamil we were checked out and transferred back to glorious Semporna. I couldn’t recommend Scuba Junkie more highly, we had a great time with the staff and all the other punters and the diving will always rank among the best things I have ever done. All of the divemasters were great but I’d give a special shout out to Simon who was brilliant throughout and good company to boot! 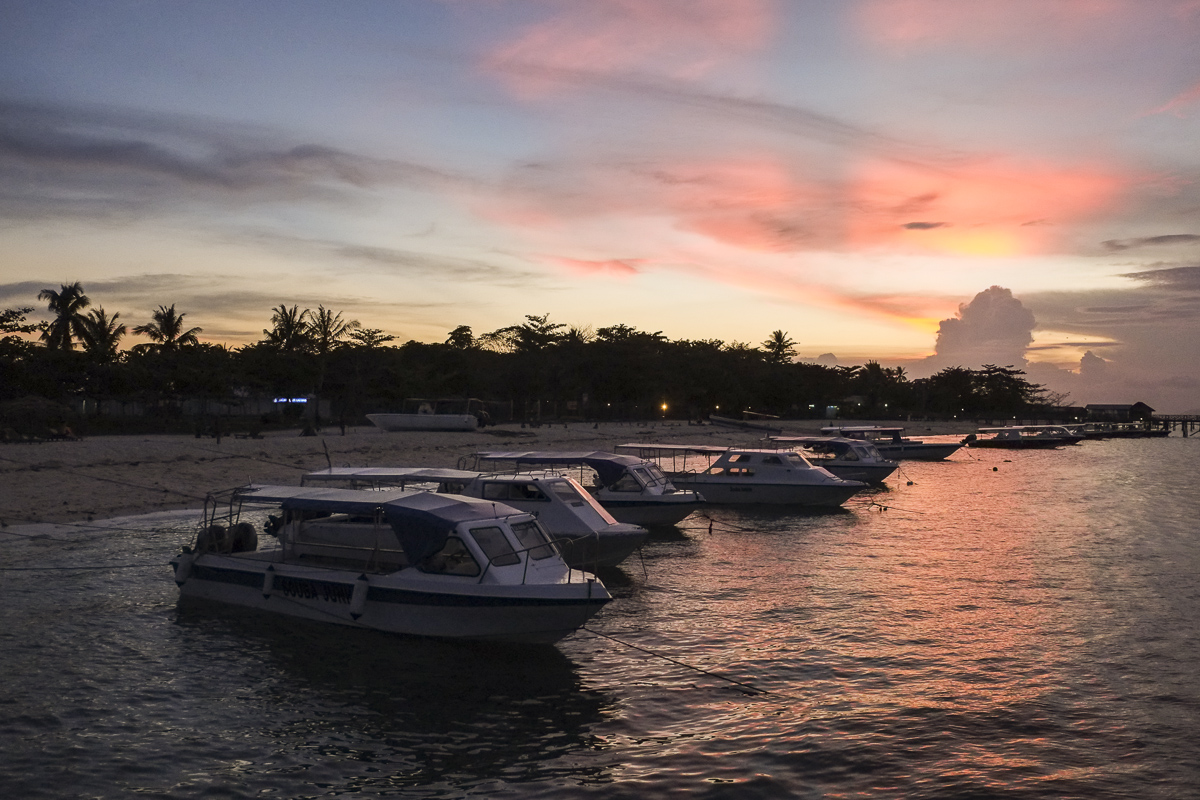