Malaysian Borneo boasts two incredible ecosystems – the coral reefs and the tropical rainforests. After spending 4 days diving the next thing on the list was to see the jungle!

We had booked a 3 day / 2 night trip with insabah.com at Nature Lodge Kinabatangan. The trip, staying in  one of their Agamid Superior cabins, cost us 1180RM (£236 / $354) for us both and included transport both ways. Getting to the Medan Selera pick up point from Semporna, something I was worried about, was surprisingly easy (I guess quite a few people do this trip).  In Semporna we booked onto the next morning’s bus to Sepilok and just told the driver we wanted to get off at Medan Selera – he understood exactly what we meant and pulled up at the pick-up point at the side of the road. Medan Selera itself isn’t really anything, just a few shops and restaurants by the road. The bus arrived in good time with about 2 hours still to wait for the rainforest pick-up so we just kicked back at one of the local family restaurants with a brew and waited. Around 1pm a coach arrived to collect us – no problem at all. 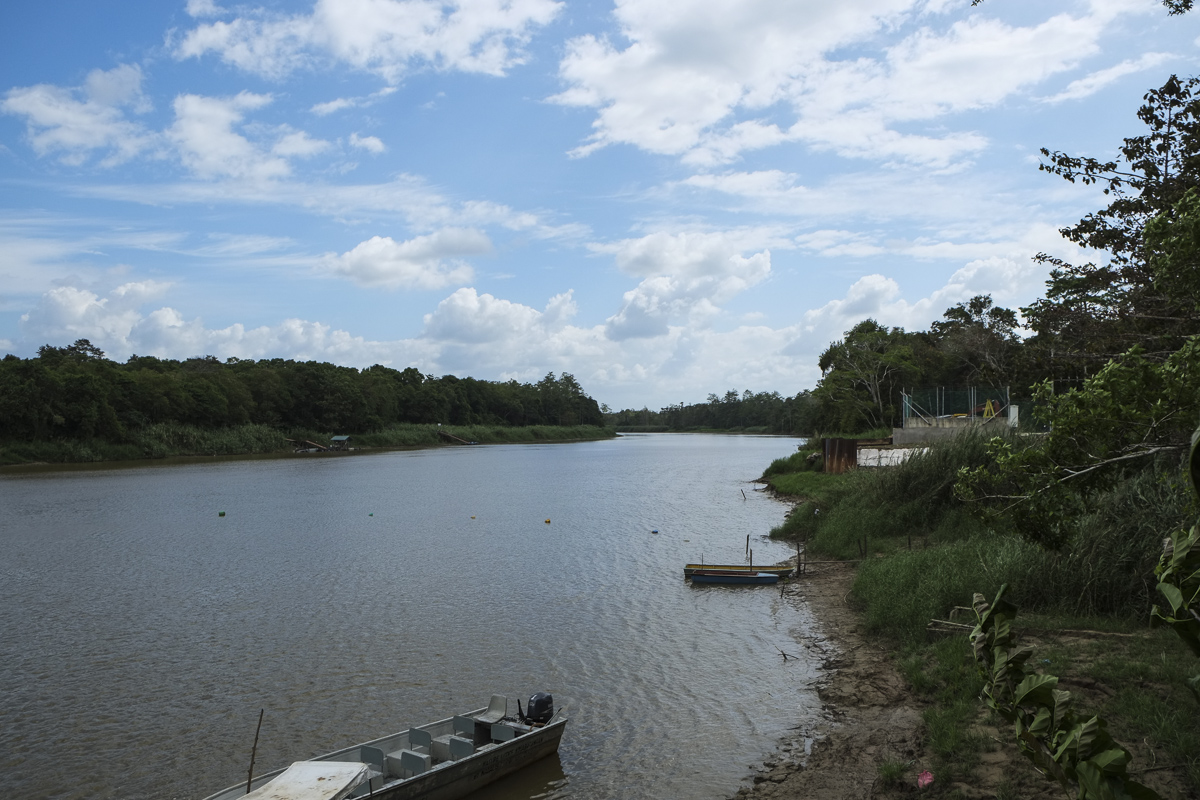 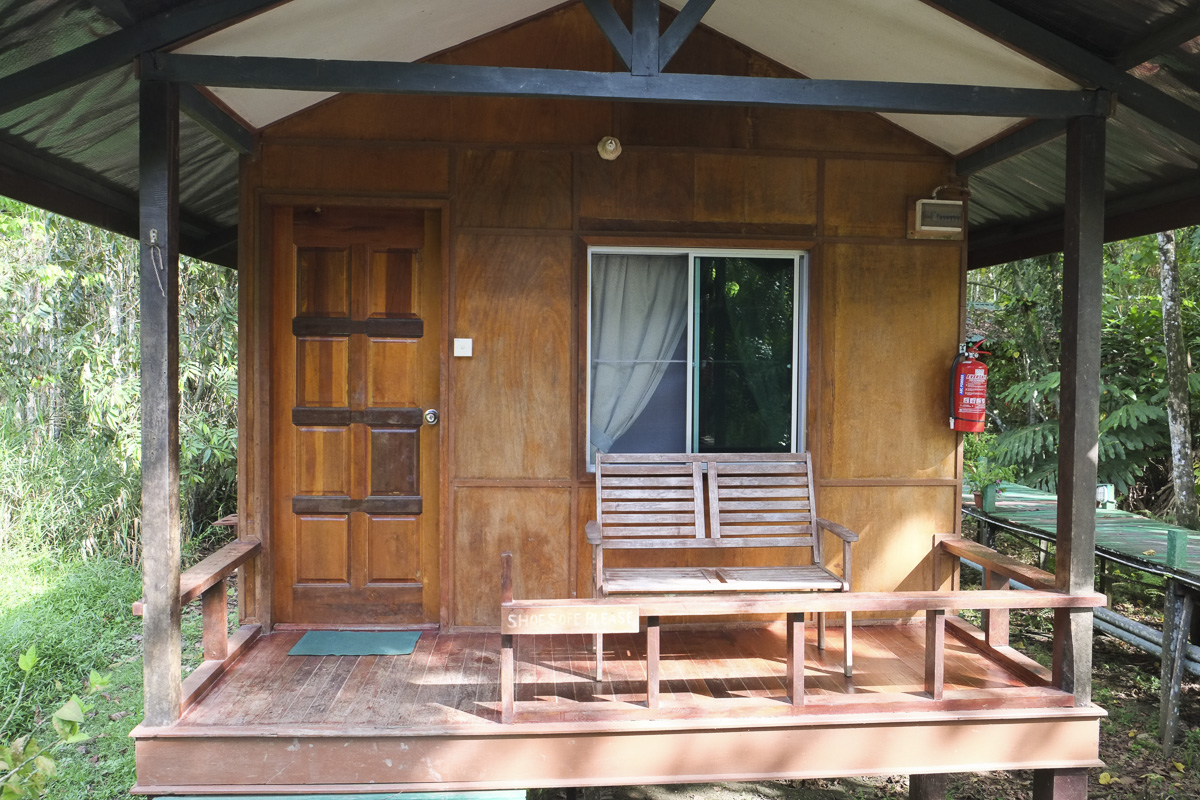 We arrived at the Nature Lodge around 2.30pm and sat down with our welcome drink to listen to the schedule – the first real activity after checking in was an afternoon cruise on the Kinabatangan River. The river is quite large and used to cut through an enormous Bornean rainforest. Unfortunately due to deforestation for palm oil plantations this rainforest is now down to a small protected ribbon which extends around 200m either side of the river – a tiny fraction of what it once was. A few tour operators now run rainforest retreats with river cruises a primary feature of all of them. 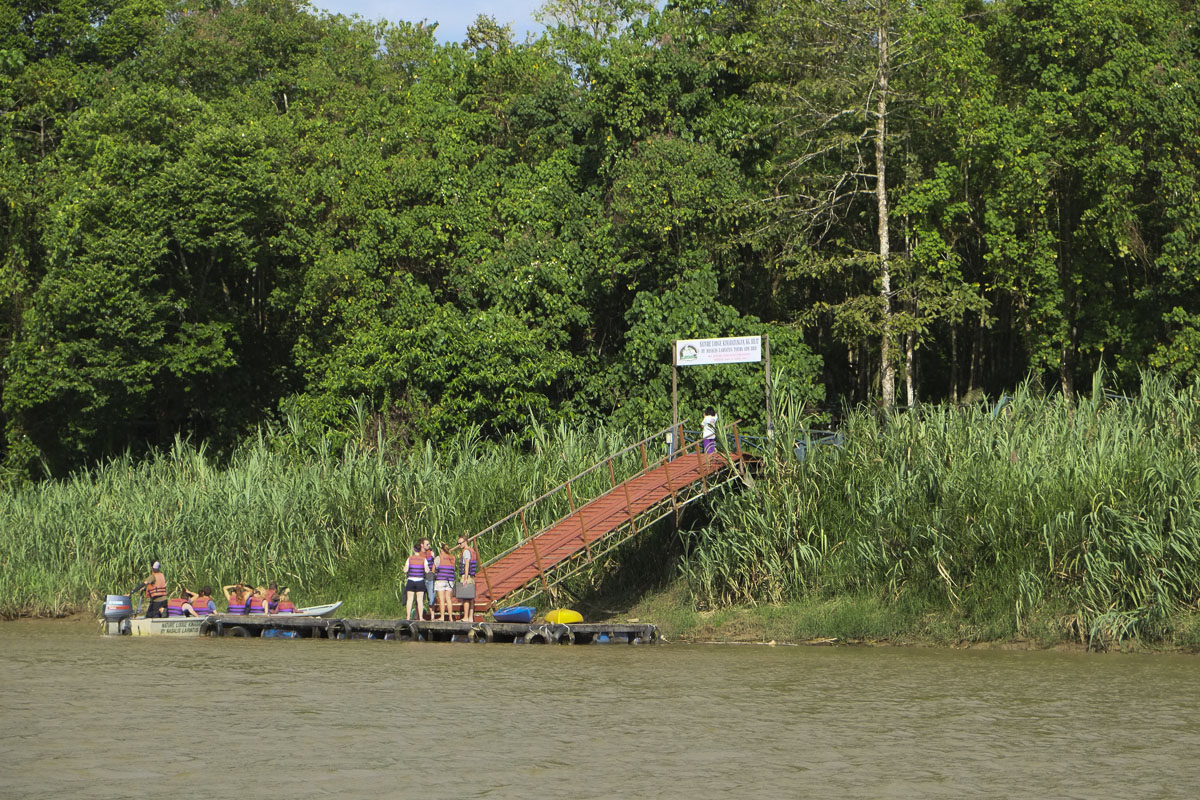 All aboard the first river cruise

So we put on a stinky lifejacket and hopped on to the boat for our first run, excited by reports of elephant sightings on the previous day’s cruise. They fit about 15-20 people on each boat so your best position (if you can get it) will be towards the front or at either side. The guides will whisk you off down- or up-river and start checking for signs of life. Within a few minutes we came across a family of long tail macaques messing around at the edge of the river – we’d soon find that they are by far the most common thing to see, although as often as you see them they are also very entertaining! We also got our first glimpse of saltwater crocodiles, proboscis monkeys and even a distant orangutan making a nest up in a tree. 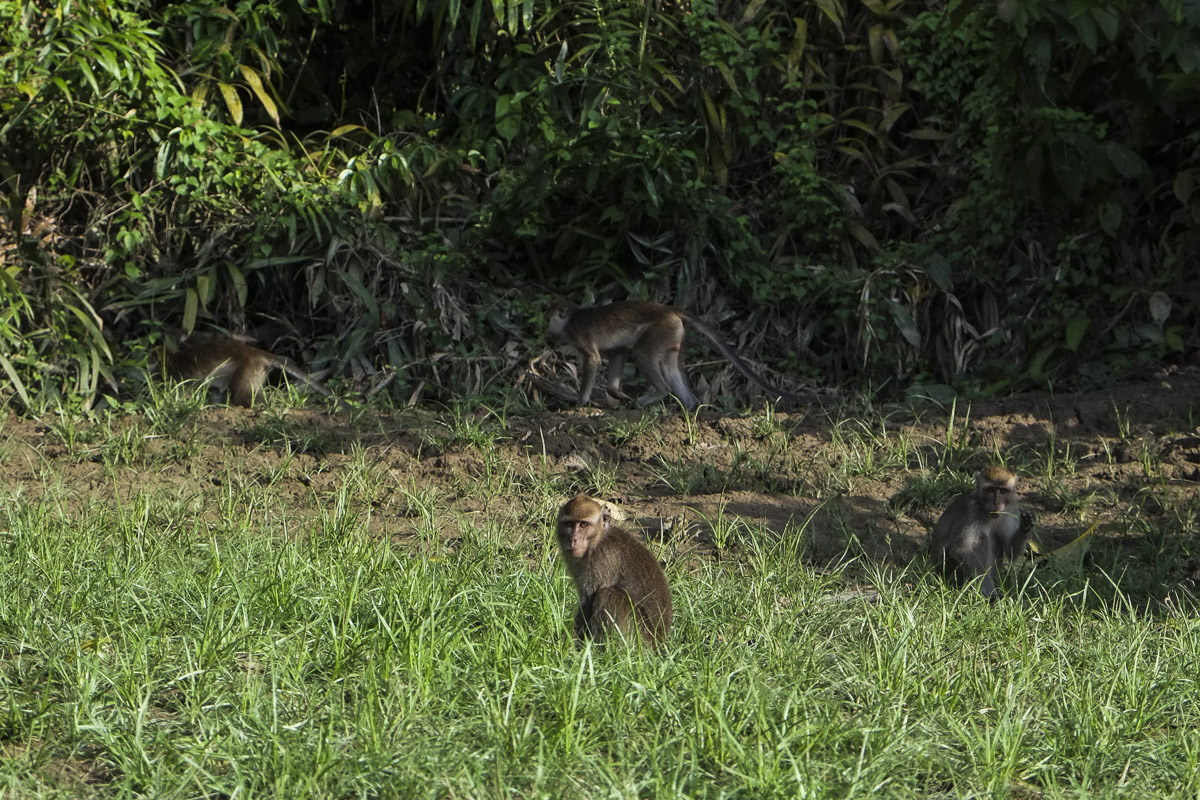 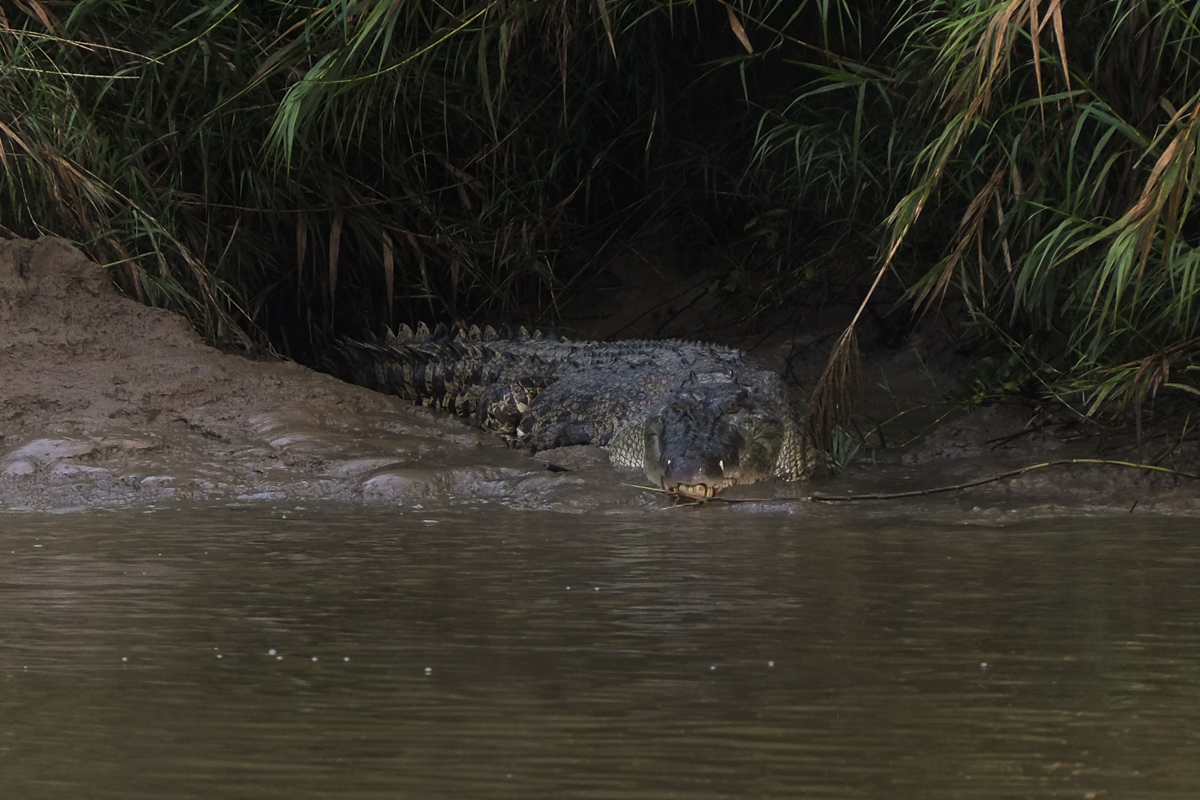 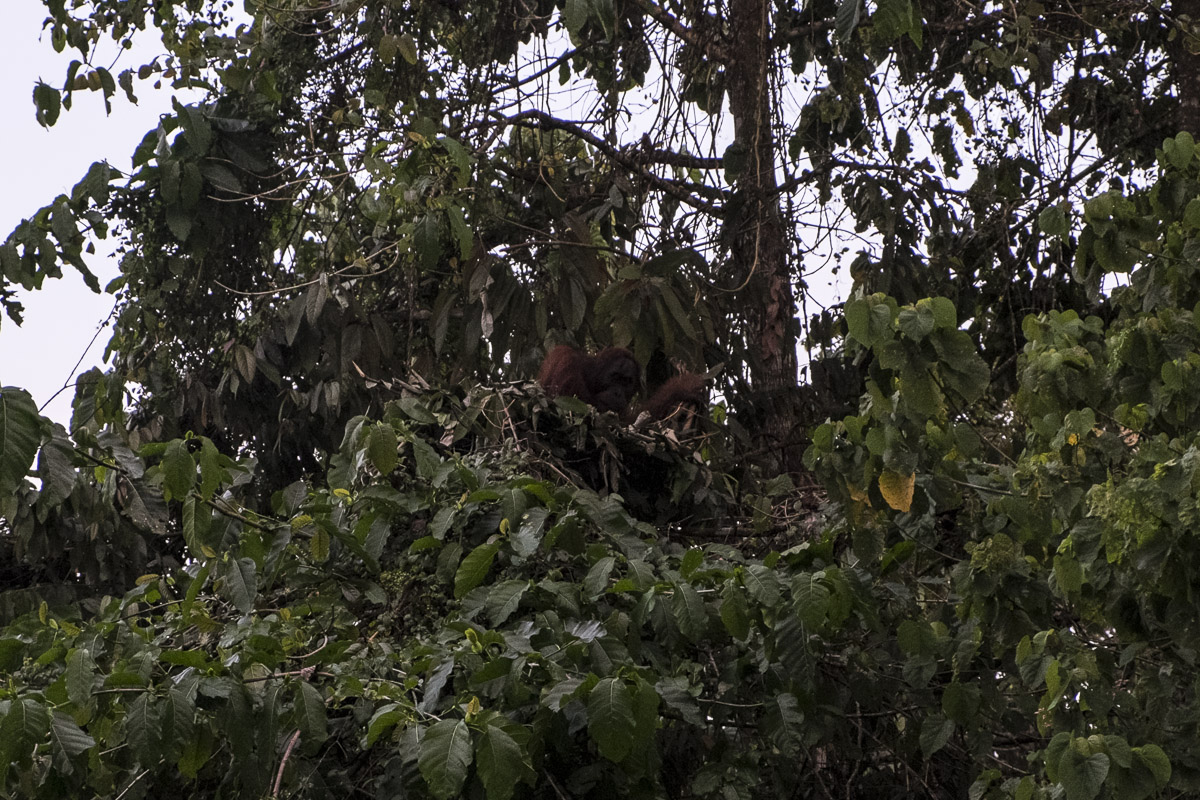 Our first glimpse of a wild orangutan

Back on the riverbanks, there was some excitement around. We quickly discovered that after cruising around for an hour looking for them a local orangutan was making a nest in a tree right by our chalet! We stood with some of the other guests watching until he put his head down for the night. Following that we had an hour or so to chill and then it was time for our first meal. The food was served buffet-style and was tasty and plentiful, although it all disappeared quite quickly so don’t hang around when you hear the gong! After dinner we had the option of going on a night walk through the forest for a bit more wildlife spotting with the guides. Given there weren’t any bars or nightclubs in the vicinity we thought we may as well. We rented some boots from reception as it was a pretty muddy walk and set off into the bush. The jungle was certainly a bit creepier at night but the walk was well worth it – we saw tree frogs, lots of sleeping birds and even a distant mouse deer rummaging through the undergrowth! After the walk we kicked back for a couple of hours and got a necessary early night. 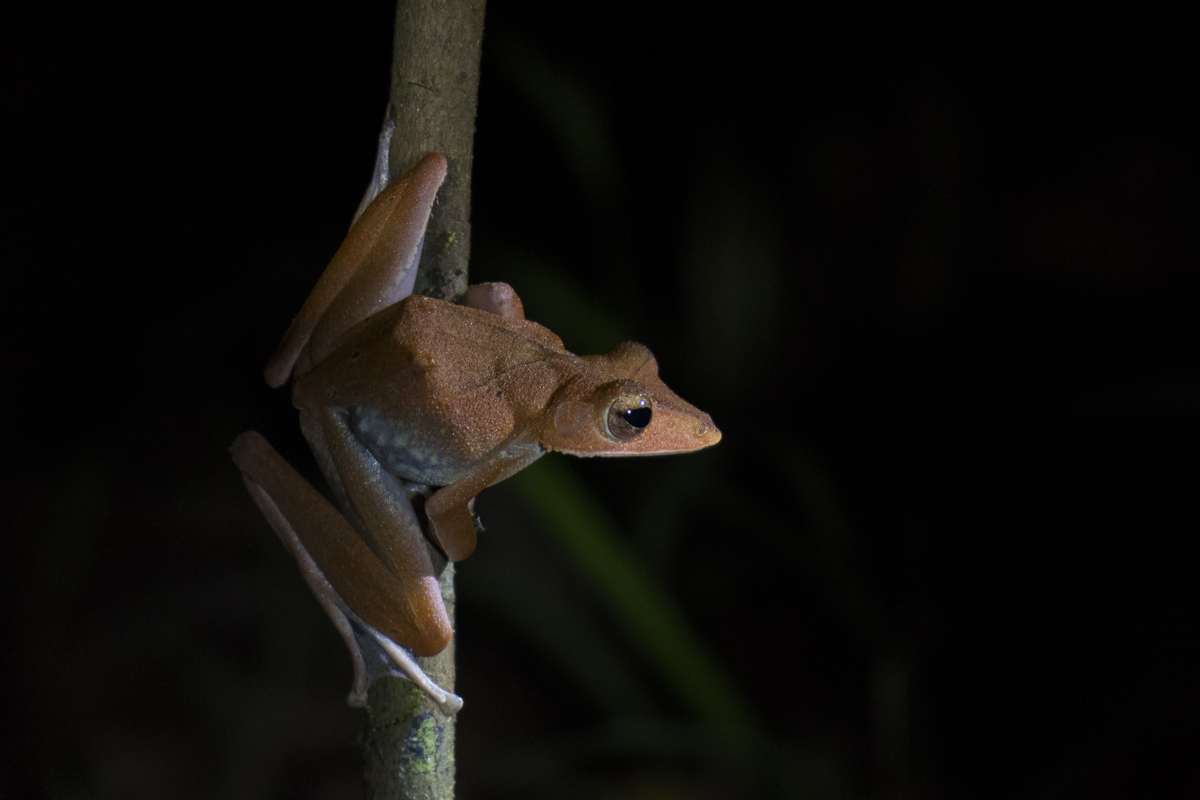 I say necessary as we were woken up at the crack of dawn for our morning river cruise. Pretty similar to the first we jaunted up the river to see what wildlife was hanging about. We saw loads more saltwater crocs sunning themselves on the riverbank and a few more monkey troupes starting their day. The highlight on this cruise was definitely a family of otters we came across on the way back – judging by our guide’s reaction it was quite a rare spot indeed. Still no elephants though. 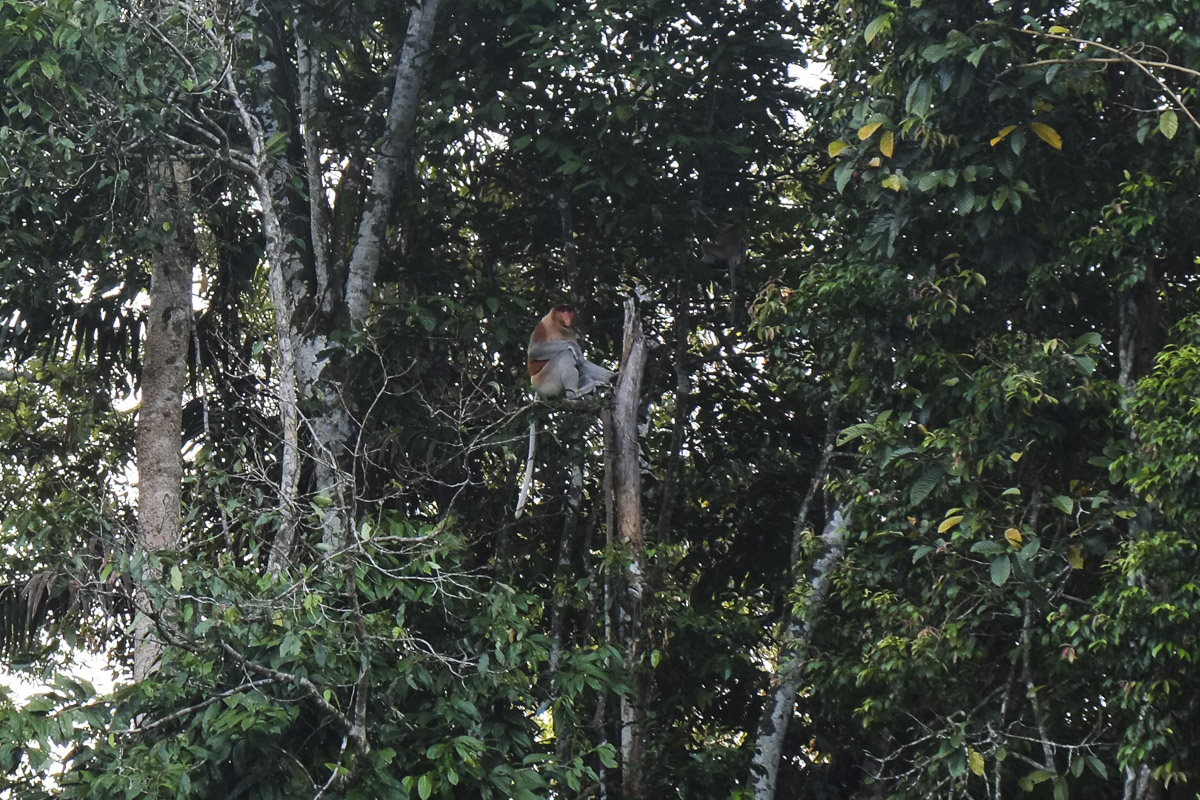 After breakfast we switched from the river cruises and went on a jungle hike to a nearby oxbow lake. The hike took the best part of an hour and was a cool walk through the jungle. You really got a sense of how dense and full of life (and leeches) the rainforest is. The guides were helpful in pointing out the leeches to avoid, as well as pill-bugs, a tree squirrel and some other creepy-crawlies. The oxbow lake itself was very quiet and peaceful. The edges were teeming with small fish and the guides brought some bread to feed them. You could also dip your feet for a free fishy massage! On the way back to the camp we finally found out why they call it a RAINforest. The heavens opened and poured down on us and the trail quickly turned to mud. Luckily it only lasted 10-15 minutes and it was so warm that it was almost welcome! We had ample opportunity to dry off and after lunch we chilled for the afternoon. 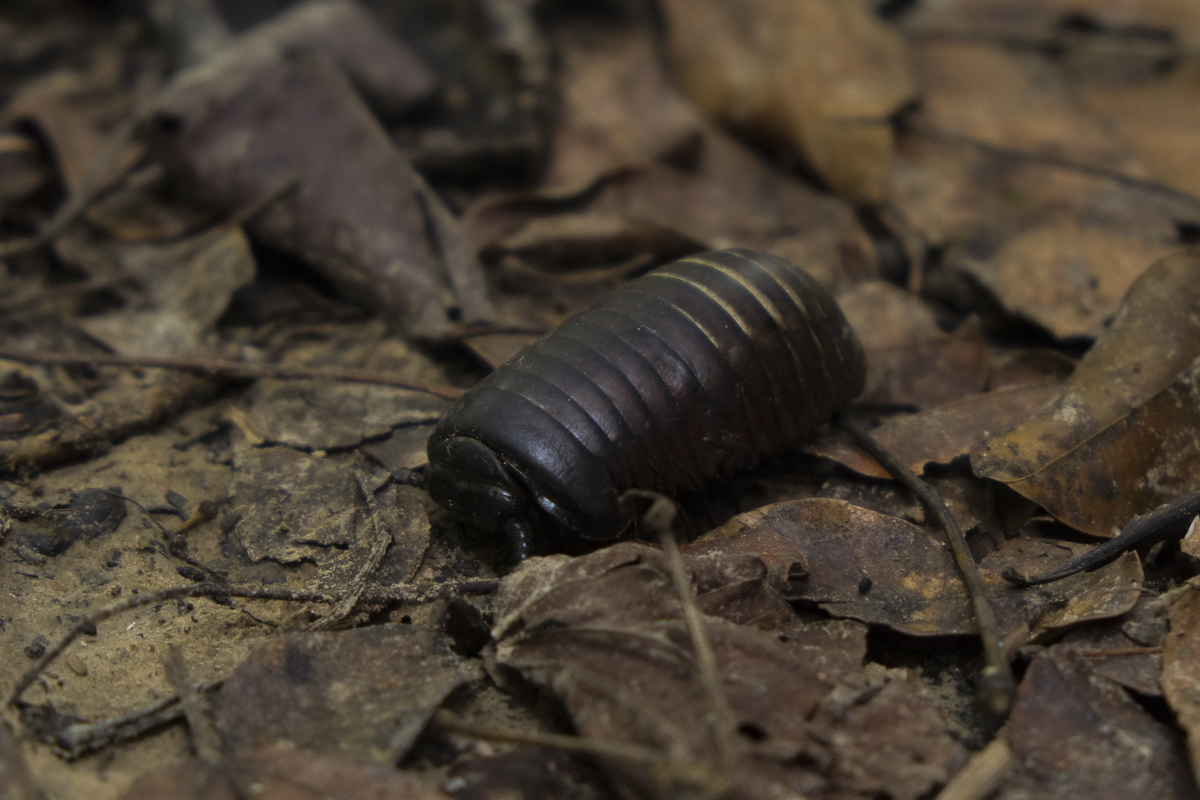 A pill bug in the undergrowth 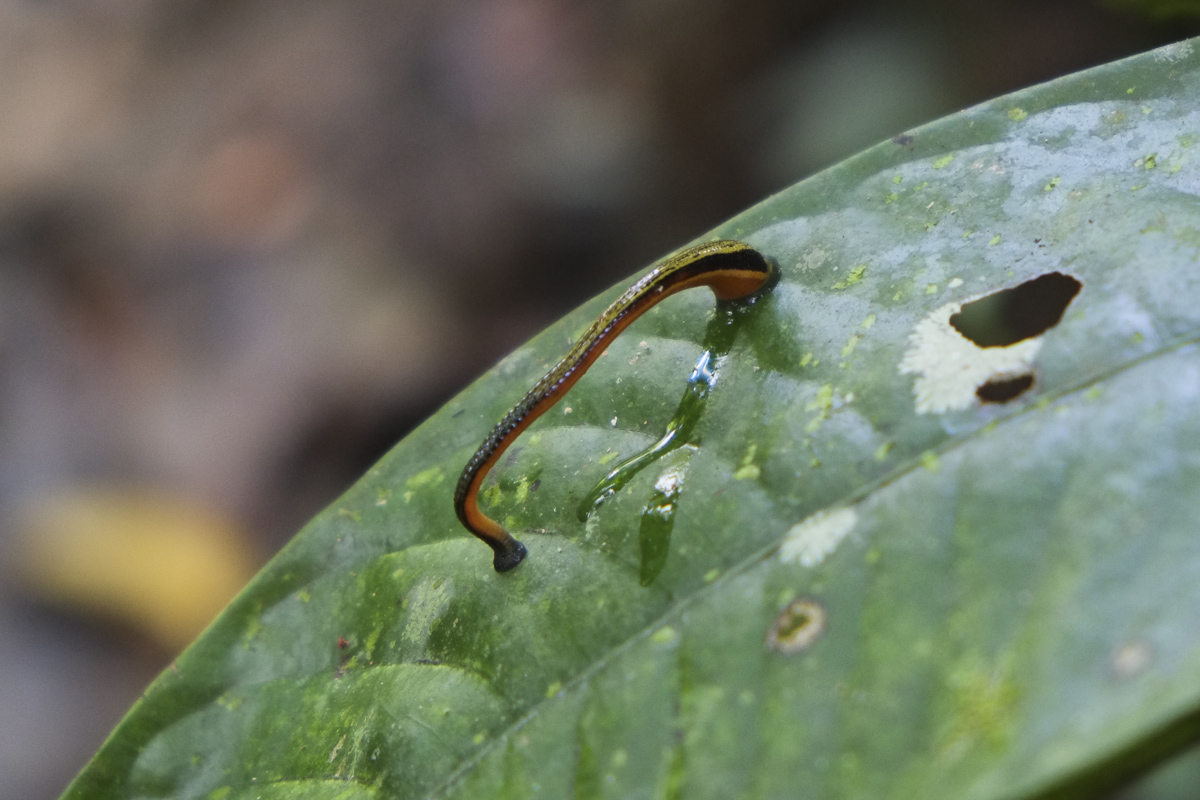 Watch out for the leeches! 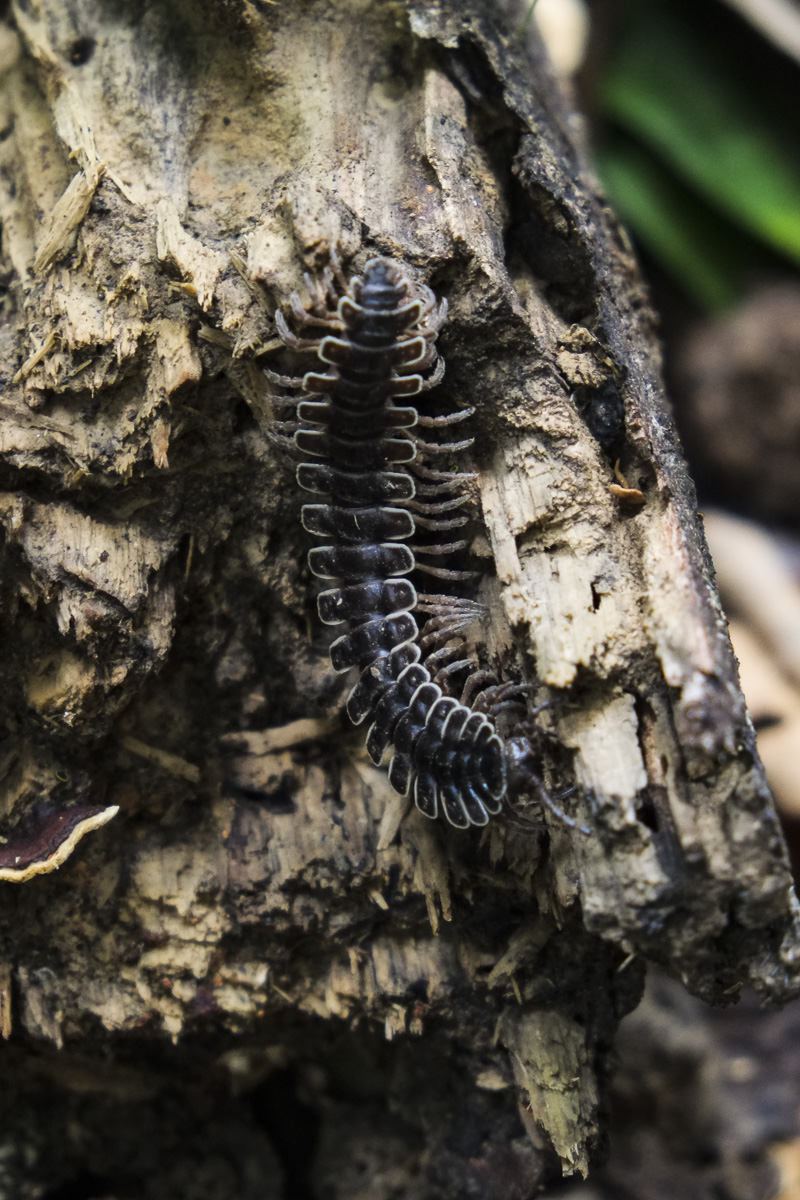 We had one further evening cruise on which we travelled the opposite way to our previous cruises – heading downriver first. After a couple of cruises already it made a welcome change to at least see another stretch of the Kinabatangan. In addition to plenty more monkey families we also saw a couple of snakes nestled in the trees (how the guides spot those I’ll never know!) and some interesting bird species overhead. It was also cool to see a large rope bridge which local conservationists have erected high over one of the river’s tributaries to allow the local primates to move around the area more easily. We sailed back during our final sunset on the river and sat down to one last dinner. There was another night walk but we opted out – one was enough and we had to pack up to leave early the next day. 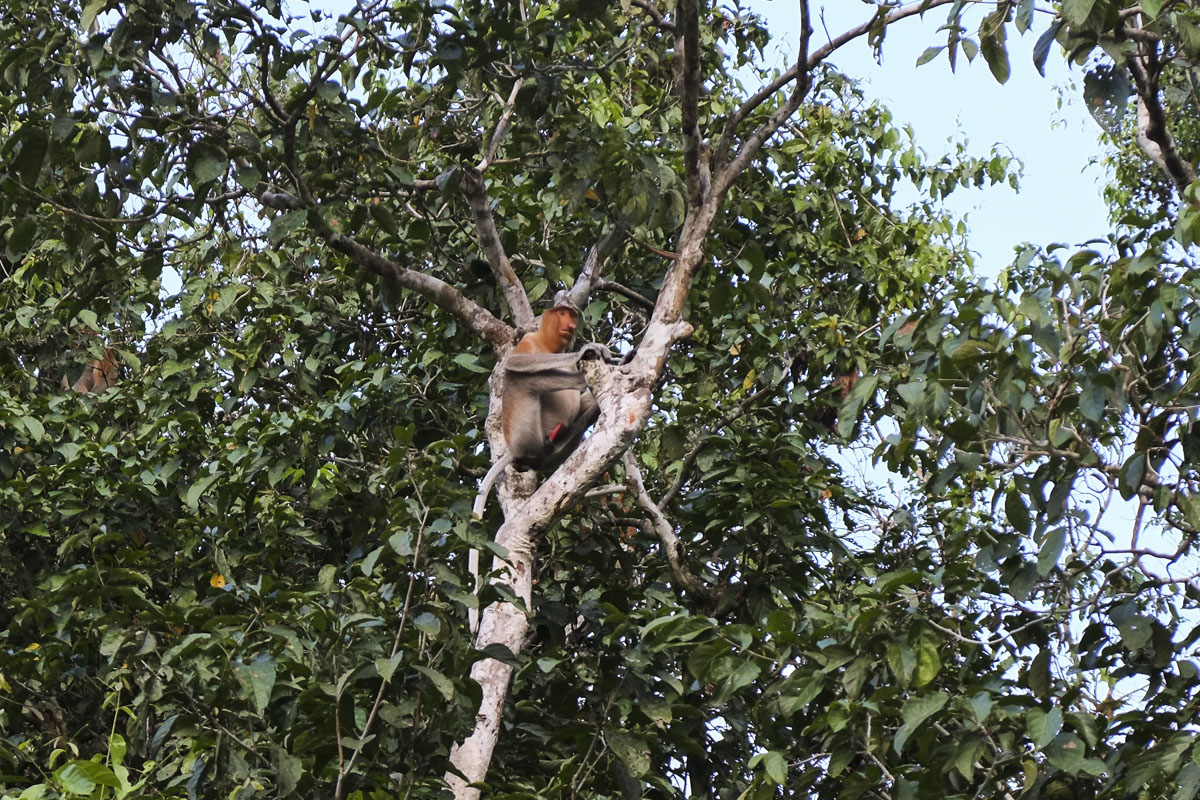 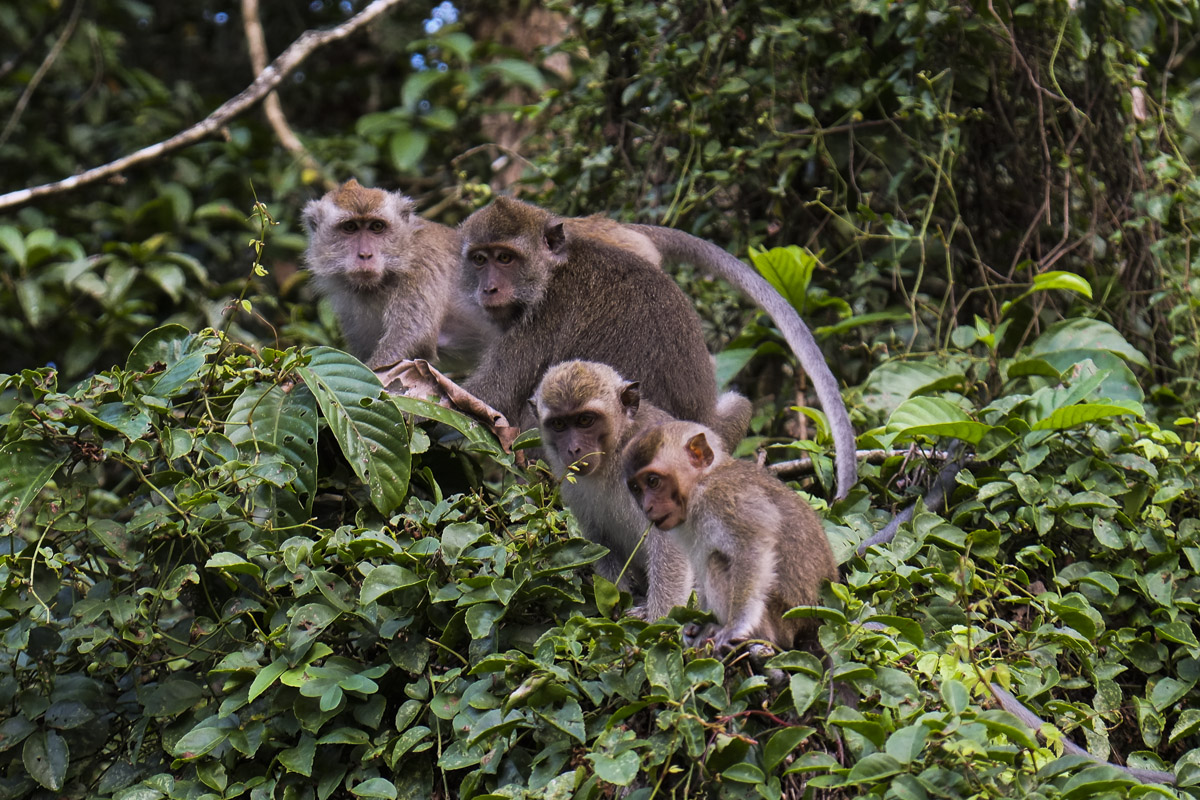 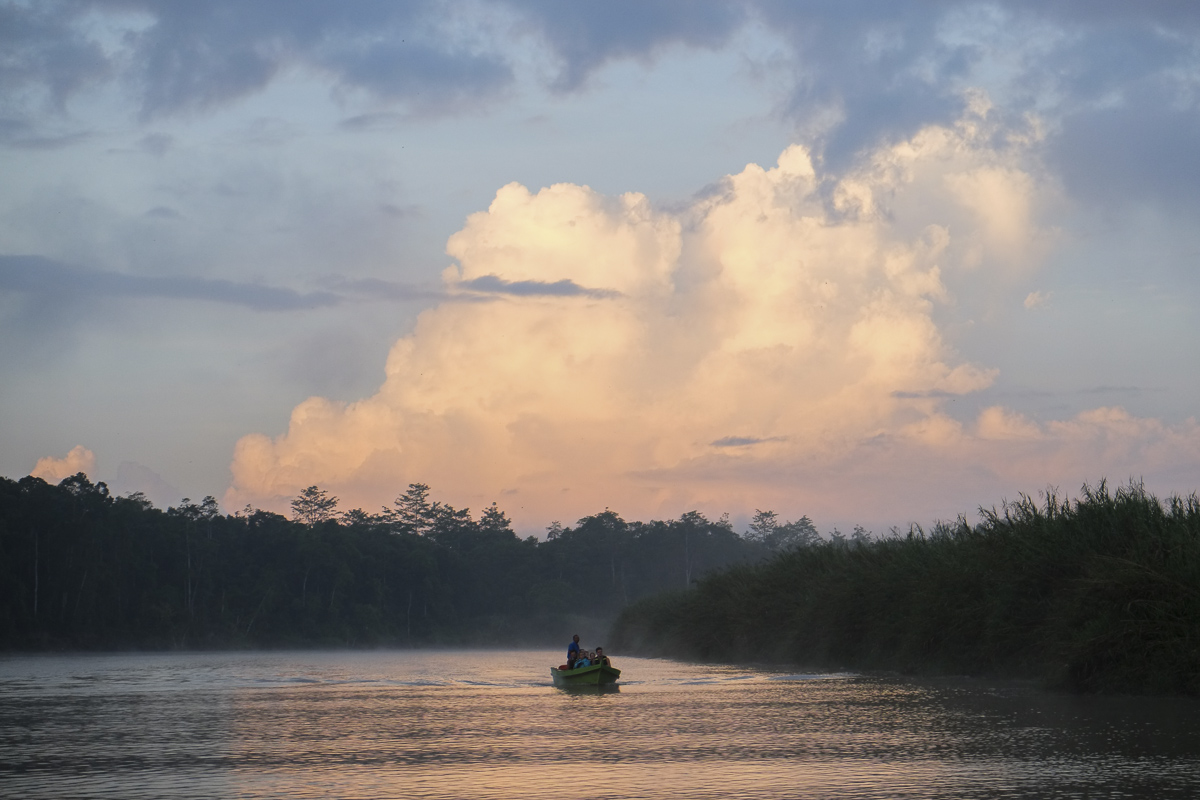 On the final morning we had one last cruise around but by that point we were pretty cruised out. Obviously things would’ve been different had we seen some elephants or orang-utans but it was very much ‘a-bit-more-of-the-same’. We were back and fed and checked out nice and early for our trip further North. 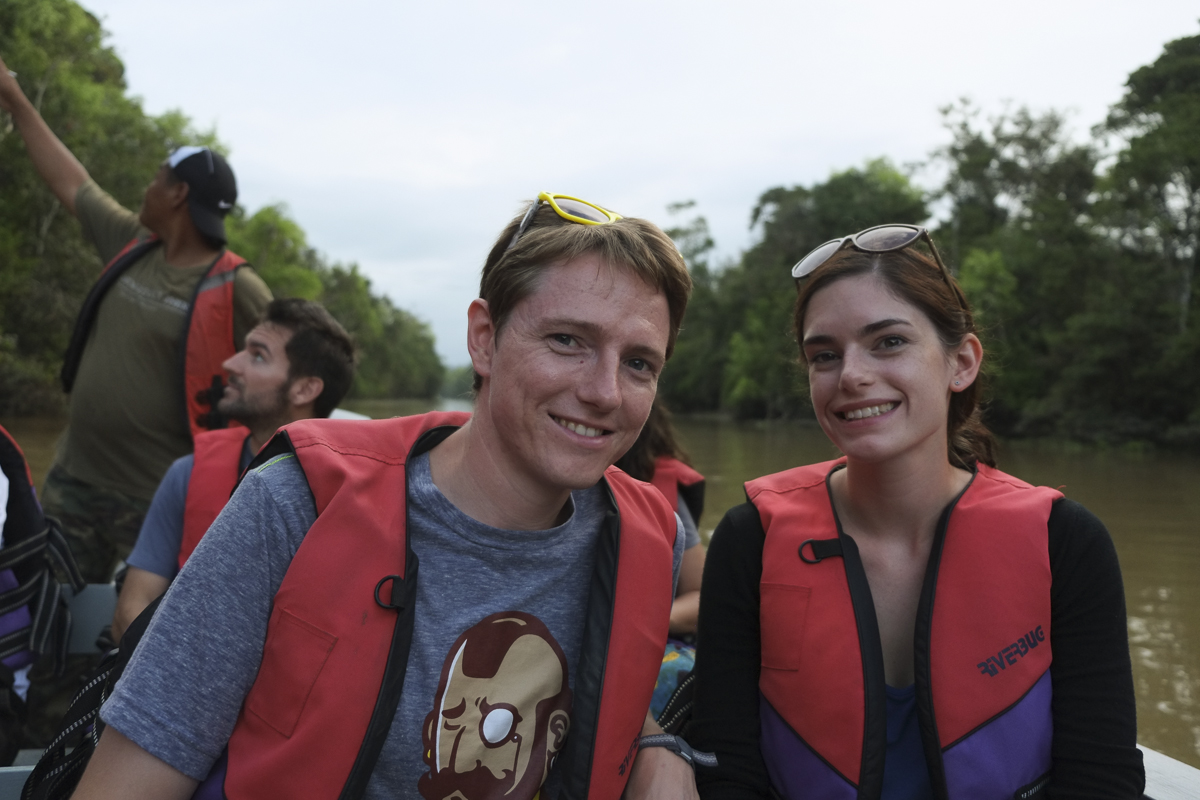 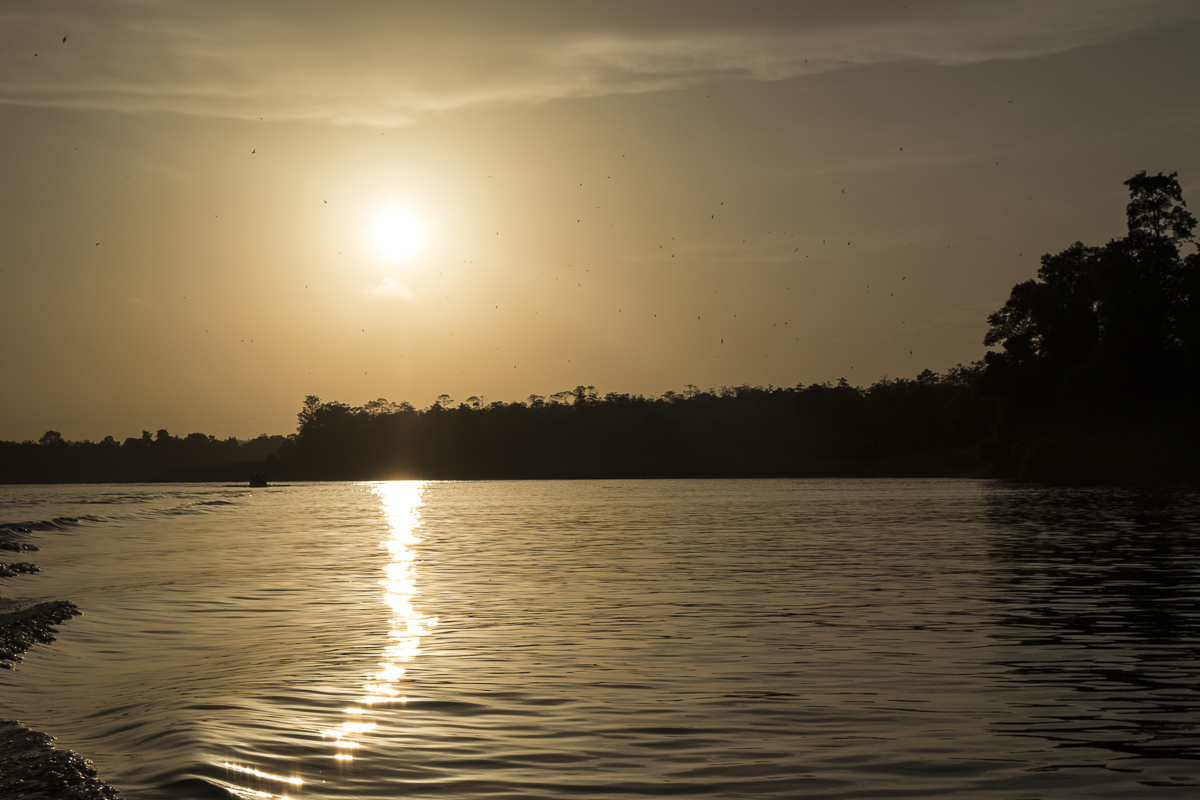 One handy thing about the tour was that the transfer back included the option to drop us off at the Sepilok Orangutan Sanctuary in Northern Sabah – and that’s exactly what we did next!