The return coach from Kinabatangan dropped us off in Sepilok outside the orang-utan sanctuary as promised. After seeing a couple of orangs in the rainforest it was exciting to see more up close. The sanctuary is on a very large site but the orang-utans are fed twice a day  at a feeding platform so you essentially get a guaranteed exhibition there. We had missed the morning feeding time but there was the afternoon to look forward to. Unfortunately the enclosures are closed inbetween the feeding times so we had to wait around for a while. We were still able to go for a small hike in the other part of the rainforest there – the woman at the ticket counter took a while to understand what we were asking to do but eventually our bags were put in a locker and we were in and walking up to the bird tower! 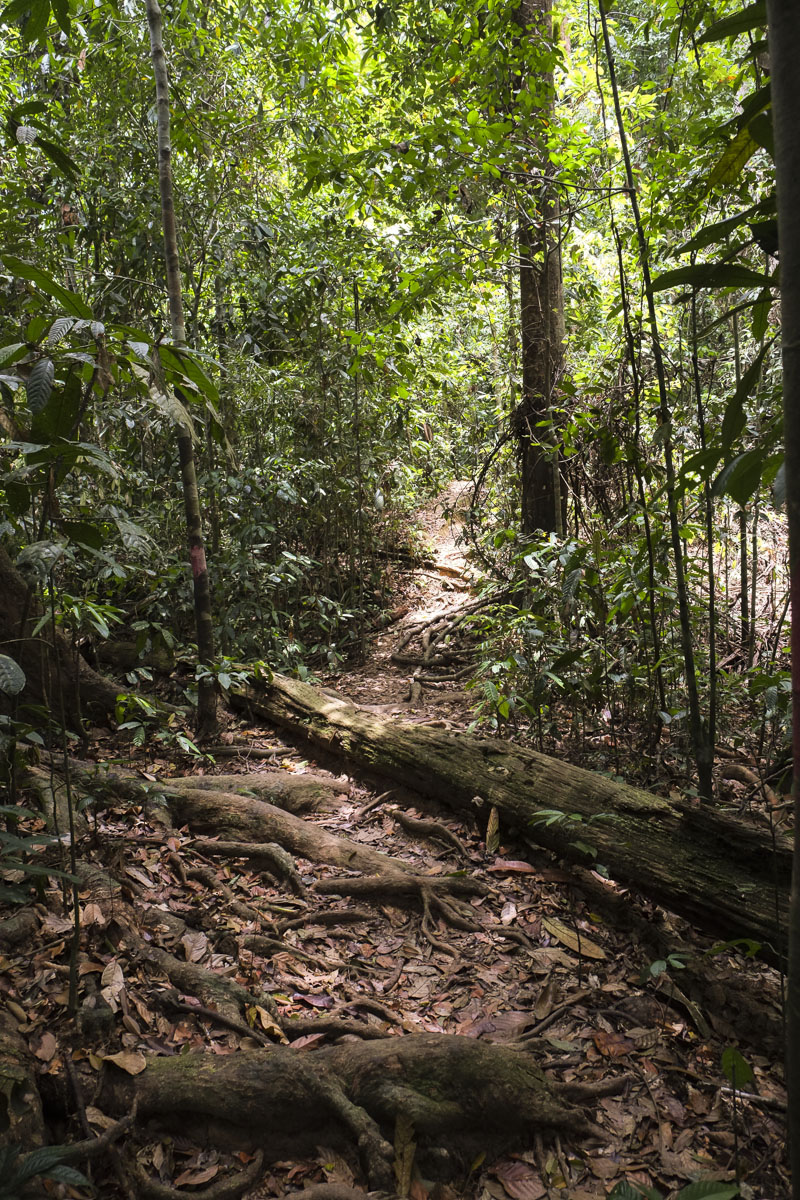 Almost straight away we came across some smaller monkeys scrambling through the undergrowth at the side of the boardwalk. They eyed us up but seemed pretty unconcerned and wandered off. A sign of more sightings to come perhaps? 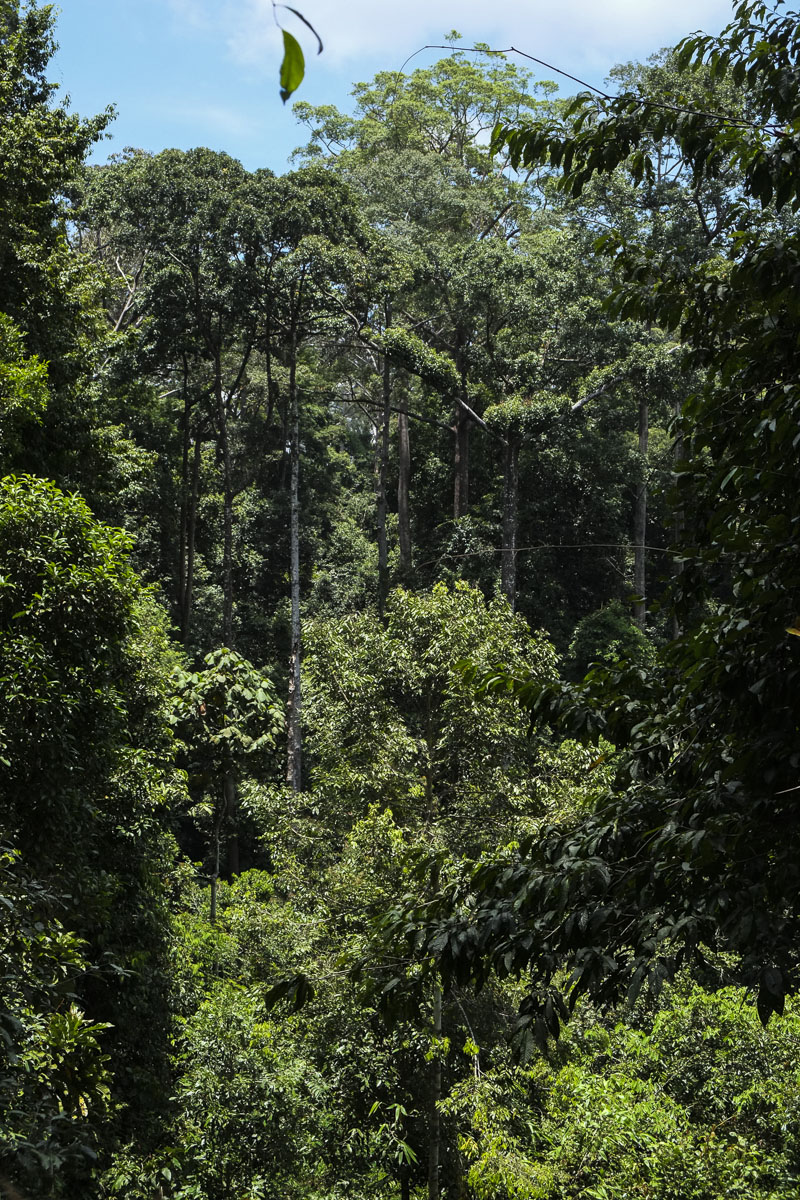 Alas, it was not. Our sweaty 2km hike through the jungle resulted in no further wildlife of note – although the tower in the middle did offer some incredible views of the canopy and enormous trees in the valley. We made it back to the on-site café and grabbed some lunch until it was nearly time for the feeding. A small crowd had gathered by the entrance and in my usual self-centred was I made sure we were two of the first people into the site. We walked round the gangplank towards the feeding platforms and took up a position with a good view. While we were waiting, leaning on the wooden railings, I had a stark reminder of exactly where we were in the form of a centipede biting me on the leg! He wasn’t too big but was an angry red and black pattern and it was a painful bite. Luckily there aren’t any really dangerous species of centipede so I knew I wasn’t in much danger – it was more like a wasp sting than anything else. 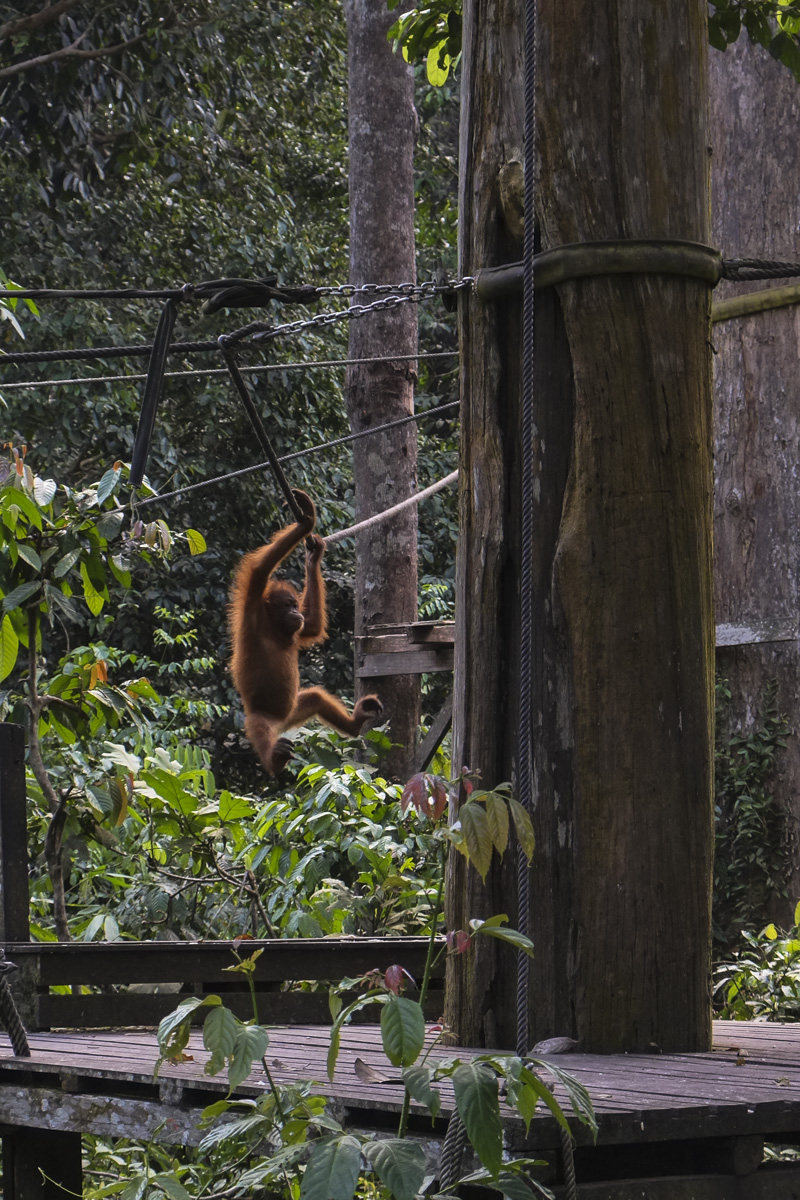 The distraction of the bite was short-lived as a few minutes later a man appeared with a big basket of fruit. He climbed up to the feeding platform and emptied out the contents. There was a moment of tense anticipation before we saw the ropes leading to the platform starting to shake. One at a time the big ginger apes came down to study what was on offer and take their pick. They are truly majestic animals and it was magical to see them up close and interacting with each other. They played around with their food and each other in a way that seemed so human, Some stealing things off others and running off to eat their spoils before another orang caught up with them. Others picking at their food, being quiet and well behaved. After most of the food was gone we high-tailed it to the infant nursery – the baby orang-utans are fed around 30 minutes after the others. Thankfully the viewing area for this was indoors and air-conditioned – result! Through the glass we saw another load of fruit given out to the little ‘uns and another round of picking, playing and bullying to boot; the overriding feeling being that we’re not as far removed from these animals as some people would like to think. 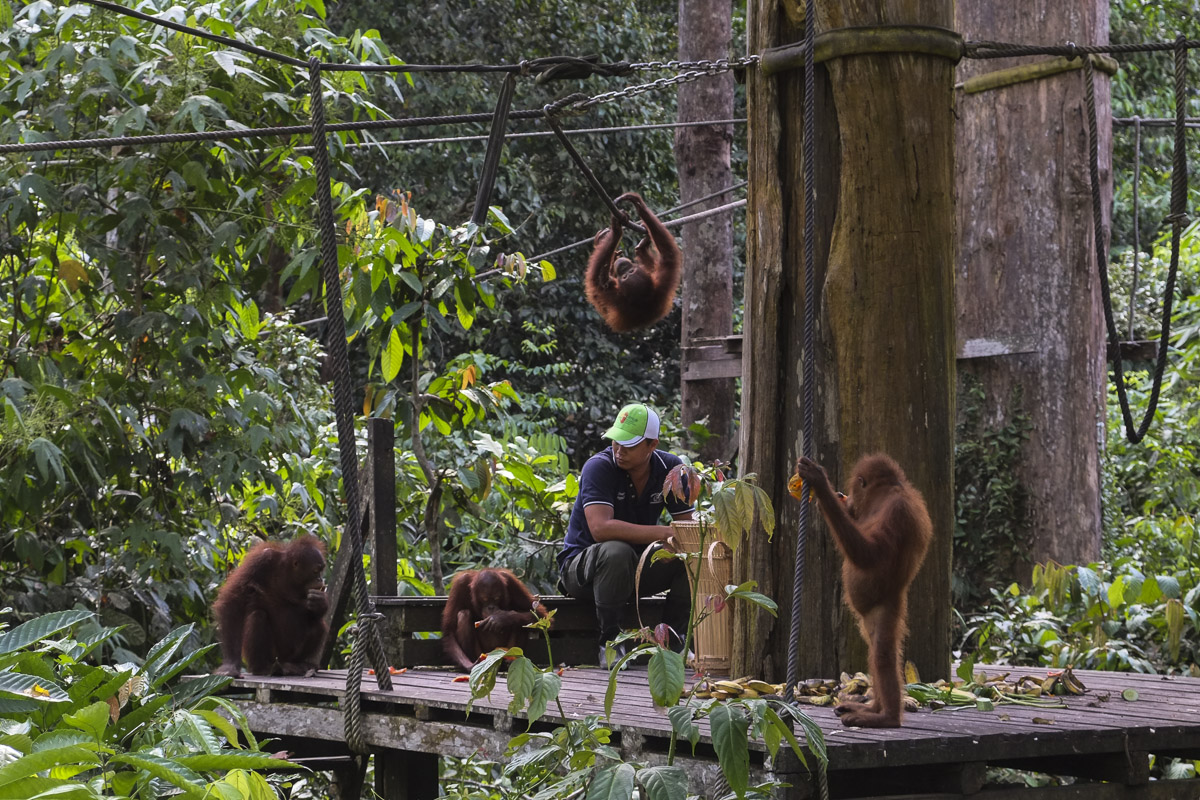 That was it for Sepilok and the next step was to get our bags back and jump on a bus to nearby Sandakan where we would stay for the night and fly out from the next morning. The bus cost us RM10 each, was as rickety & old as they come and came with an awesome Metallica soundtrack to serenade us and the local OAPs and schoolchildren who were riding with us! Eventually we pulled into Sandakan and the bus stopped conveniently close to our accommodation for the night – Borneo Sandakan Backpackers. At RM70 (£14) for a night including breakfast it was pretty decent and we’d recommend it to anyone passing through. Sandakan itself is fairly charming compared to elsewhere in Sabah but we didn’t really have time to properly explore. If you are there, however, I’d highly recommend Balin Roof Garden restaurant for an excellent pizza (with a great rooftop view to boot).