In a few short hours we went from remote jungle back to the heaving metropolis of Kuala Lumpur. On our second visit there, and after a week of getting thoroughly involved with nature, I thought we deserved a bit of the high life having done the touristy stuff last time.

In my past life with a job/flat/car etc. I had accrued a number of hotel loyalty points which I used to subsidise us for a one night stay in the fabulous Melia Kuala Lumpur. Our room was ready but we had a few missions to complete first, namely washing the majority of our clothes and getting some lunch. We were only round the corner from one the main shopping districts and we quickly found a launderette who were willing to wash our huge bag of clothes for 65RM (£13) – a bit pricey by previous Asian standards but well worth it still. With the laundry bag empty, filling our bellies was the next job. The mall round the corner had an underground food court which we scoped out. You could get any kind of Asian cuisine you could wish for all at bargain prices – I’d normally be pretty sceptical of eating in a food court but they seem to be the norm in KL. A place to hang out and socialise. The beef rib noodle soup I got definitely put paid to any qualms I had. 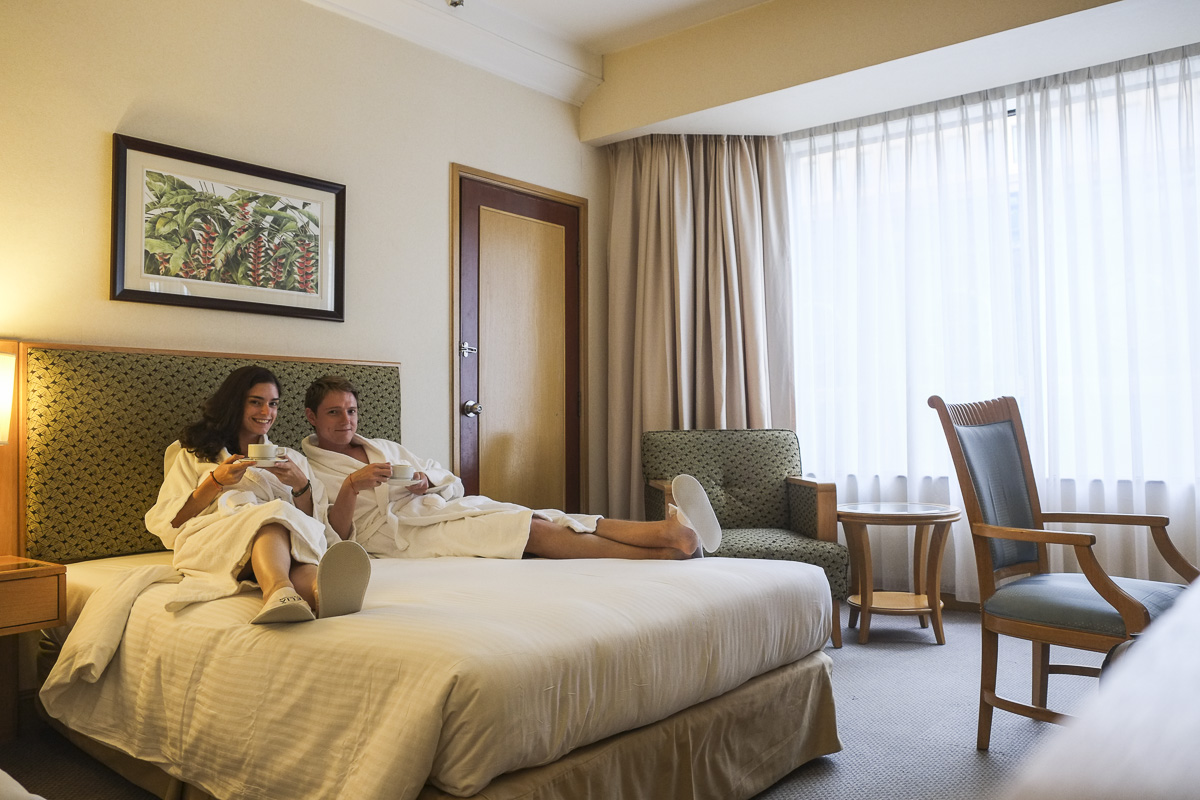 The weather was turning when we left and we returned to the hotel. We quickly settled into our enormous room and made our way down to the pool for a swim. It was deserted, possibly because it was raining a bit but if there’s one time you don’t need to worry about rain it’s whilst you are swimming! Later on we had a relaxed evening in comfort. A food voucher we received on check in meant we could get a bargain fillet steak dinner and we followed that up with beer, crisps and movies in our super comfy bath robes. That might not sound like the most exciting way to spend a night in Kuala Lumpur but it had been a long time since we really kicked back so it was a real pleasure to us! 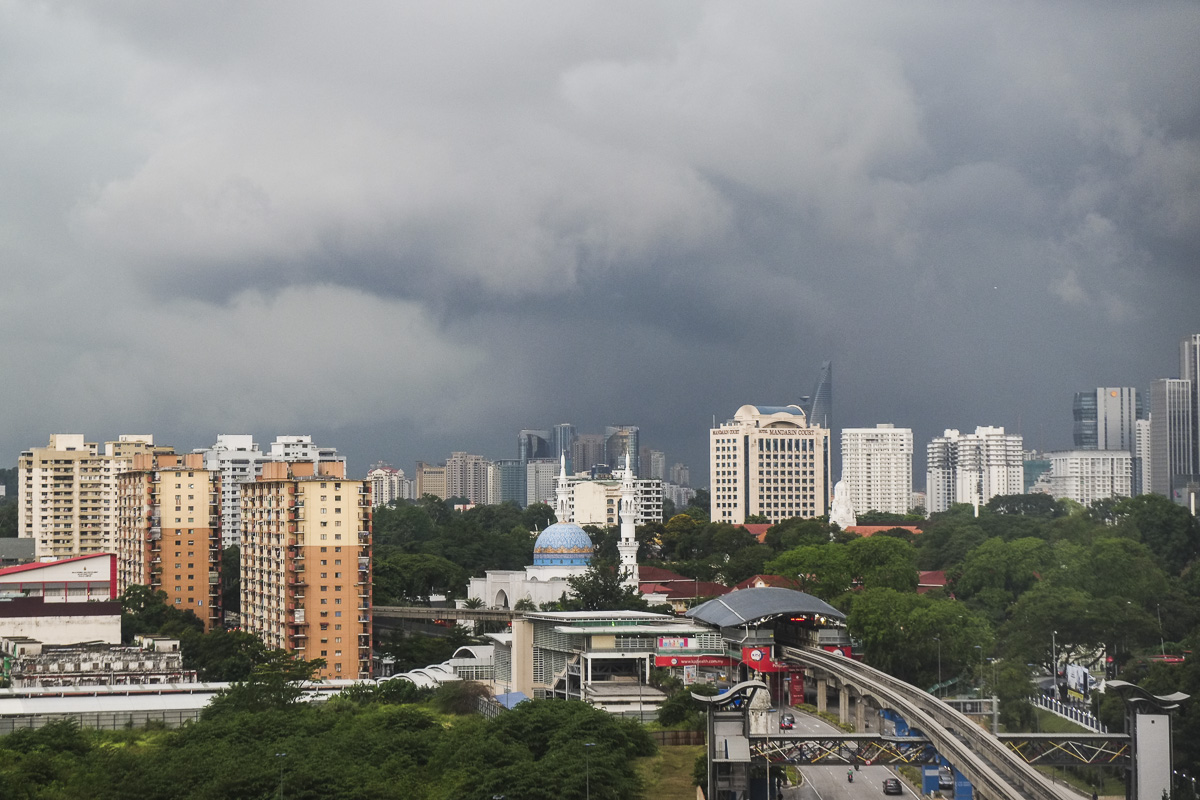 Another storm is brewing

In the morning we made the most of our comfy beds and squeezed in a morning swim before we had to check out. We only had enough points for one night in the super swanky hotel so we were set to move to our previous haunt, the Hotel Samsara for our final night in KL. We didn’t have any big plans for the day but I did want to pick up some reading material (the next Game of Thrones novel) so we spent most of the day fruitlessly seeking out second hand book shops, hanging around in malls and collecting our laundry. 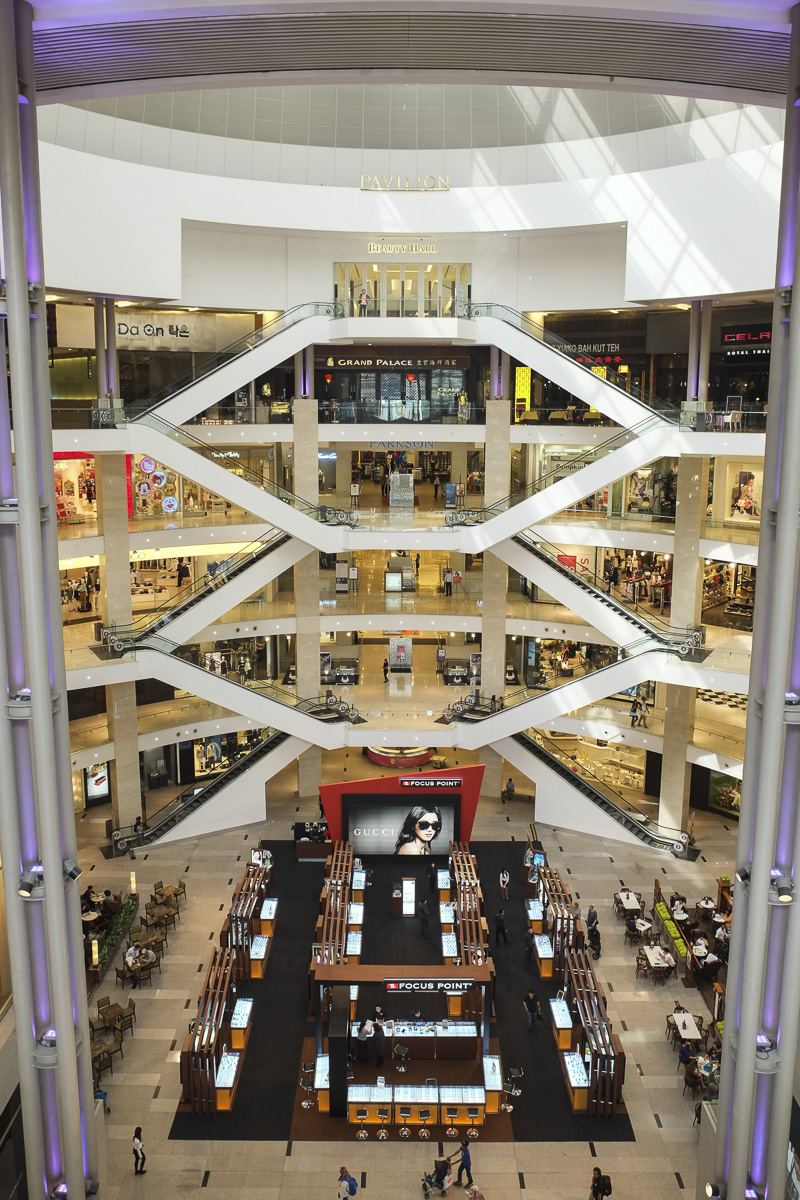 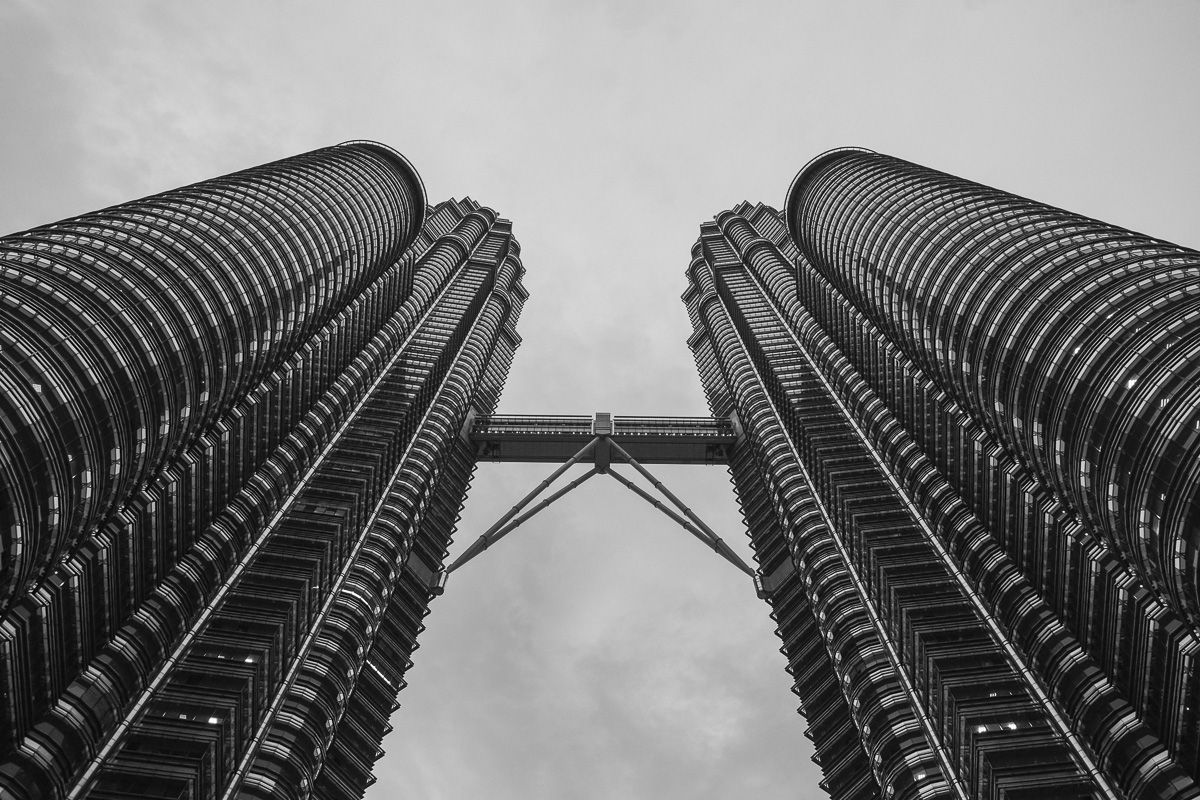 As the evening rolled around we had to see one of the sights of Kuala Lumpur that we had missed on our first trip – the Petronas twin towers. These huge skyscrapers dominate the skyline in the KLCC area and are truly impressive. You can pay a load of money to go up to the bridge between them however then your view is only of the other buildings in the area. Being cheapskates with minor alcohol issues we went for the option of visiting the KL SkyBar. The SkyBar is situated at the top of an opposite building and offers superb views of the towers and surrounding area. The drinks are pretty pricey but given the environment & views it is well worth paying 35RM (£7) for a beer and kicking back by the windows. It was quite cloudy when we arrived and a storm was clearly brewing, but as the street lights went on the sun peeked through under the clouds for a short, spectacular sunset! 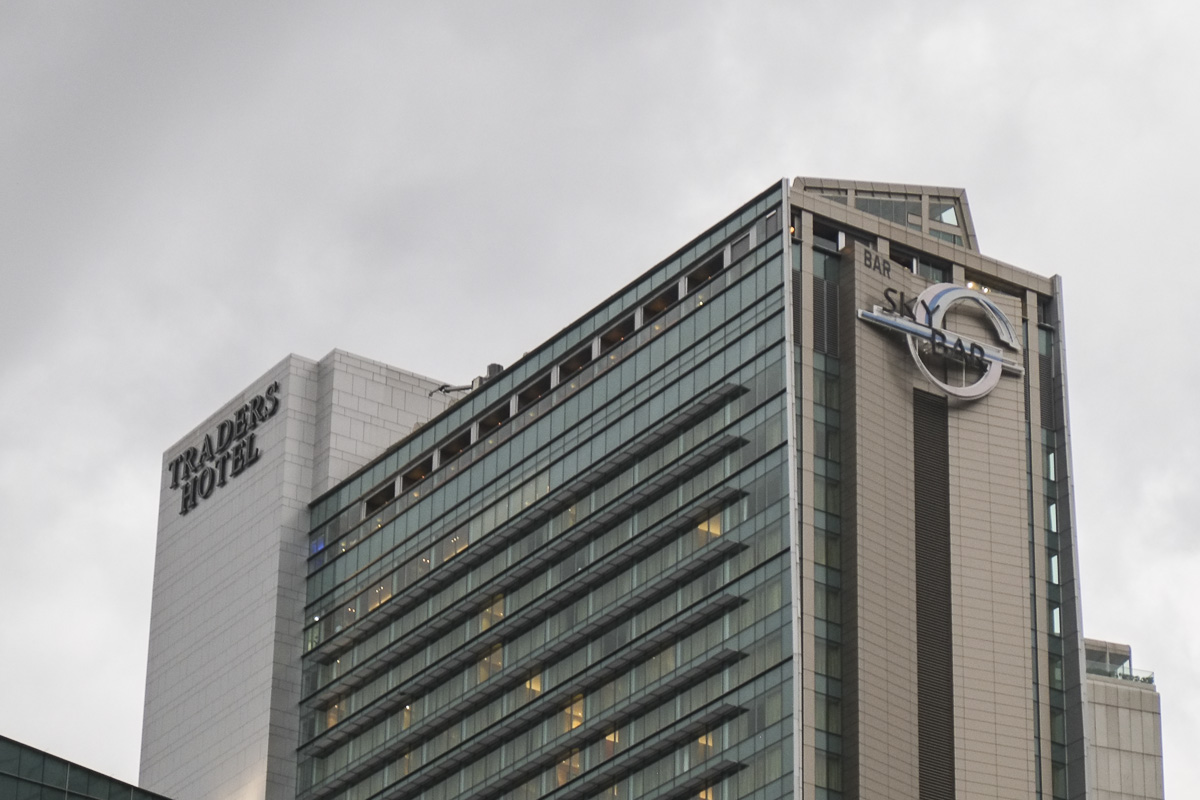 Afterwards the heavens opened, luckily in Kuala Lumpur they are very much used to this and you are generally never more than about 10 metres from a shopping mall – many of which are linked by covered walkways – ensuring you can shop and eat in peace no matter what the weather outside is doing. After a few minutes of sheltering we scooted around the block and saw the towers up close & personal. Then went off to find some dinner. 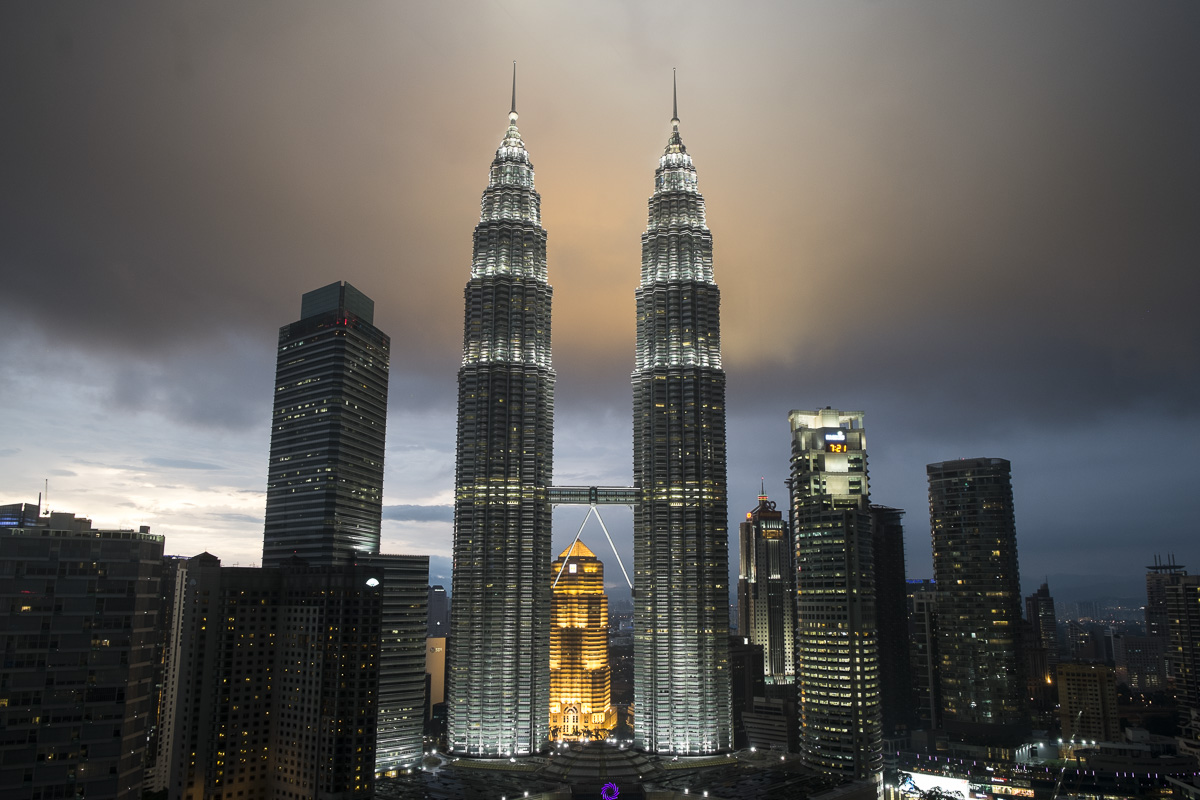 Luckily it is also one of the few cities in the world where you can find a modestly priced Michelin starred restaurant in a shopping mall. At the top of the huge KL Pavillion mall was Din Tai Fung, a Chinese dim sum restaurant with a huge open kitchen where you can see the expert chefs finely crafting some of the best dim sum you’ll ever taste. To top it all off it wasn’t even expensive, a full meal for the two of us came to 100RM (£20 / $30). It was a really excellent way to cap off our two days of living it up in KL and still stands out as one of the best meals of the trip. 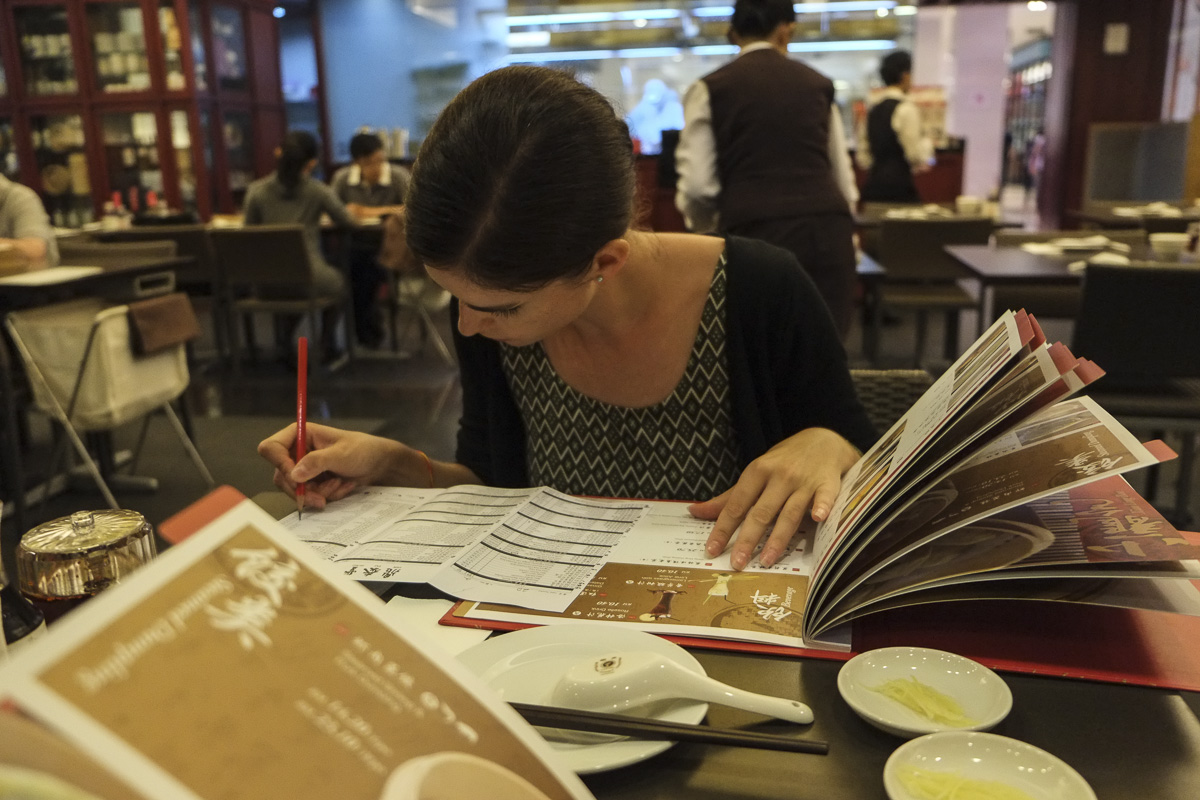 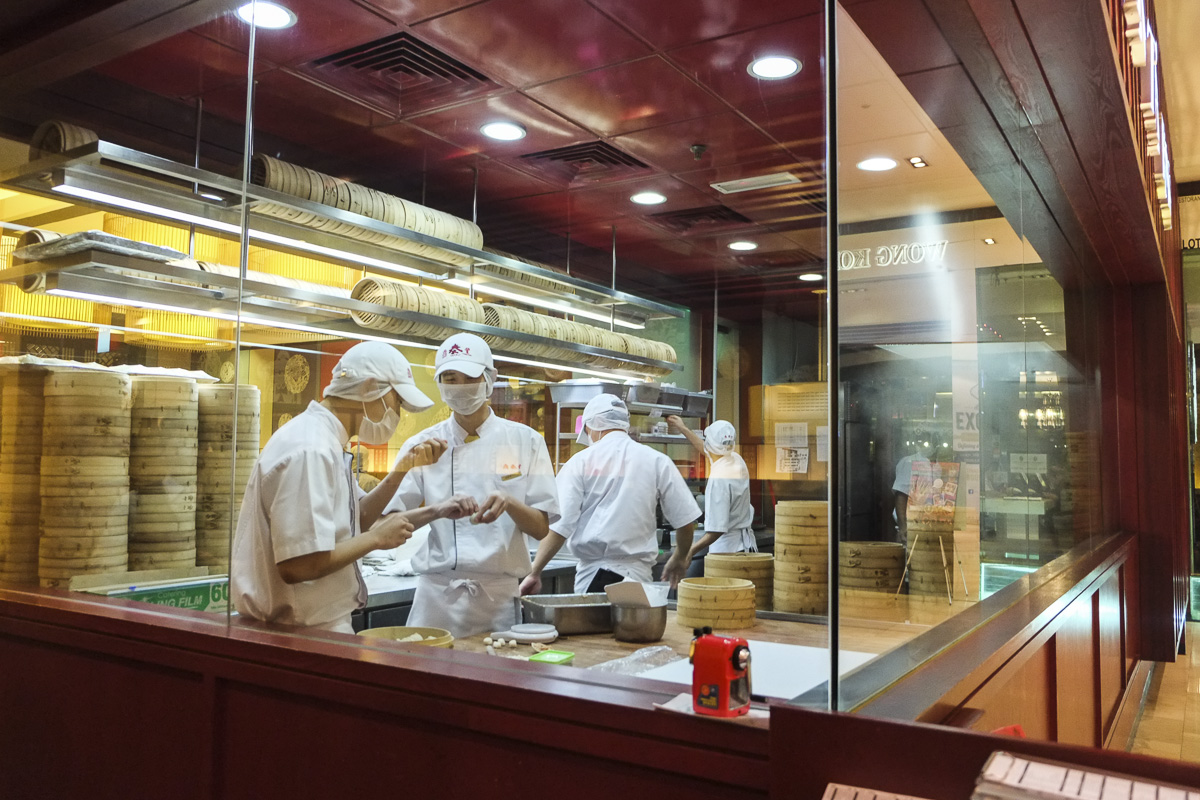 We left the huge KL Pavillion mall and went back to the hotel to pack up our things ready for an early morning flight. The next morning we were off to Indonesia, the last stop on our Asian adventure.