We woke up early in KL and checked out from the hotel. We had more time to spare this time around so walked over to the KL Sentral Station to get the KLIA Express Train to the airport. The express train is really quick and comfortable and even comes with free wifi! We got to the airport in good time and spent the rest of our ringgits on some kick-ass pastries for breakfast. One uneventful flight later and we touched down in Yogyakarta. The airport was pretty small and the immigration system quite chaotic. We joined a sort-of-queue to get our visa-on-arrival, paid the guys the $35 for our visa and got in without too much trouble. 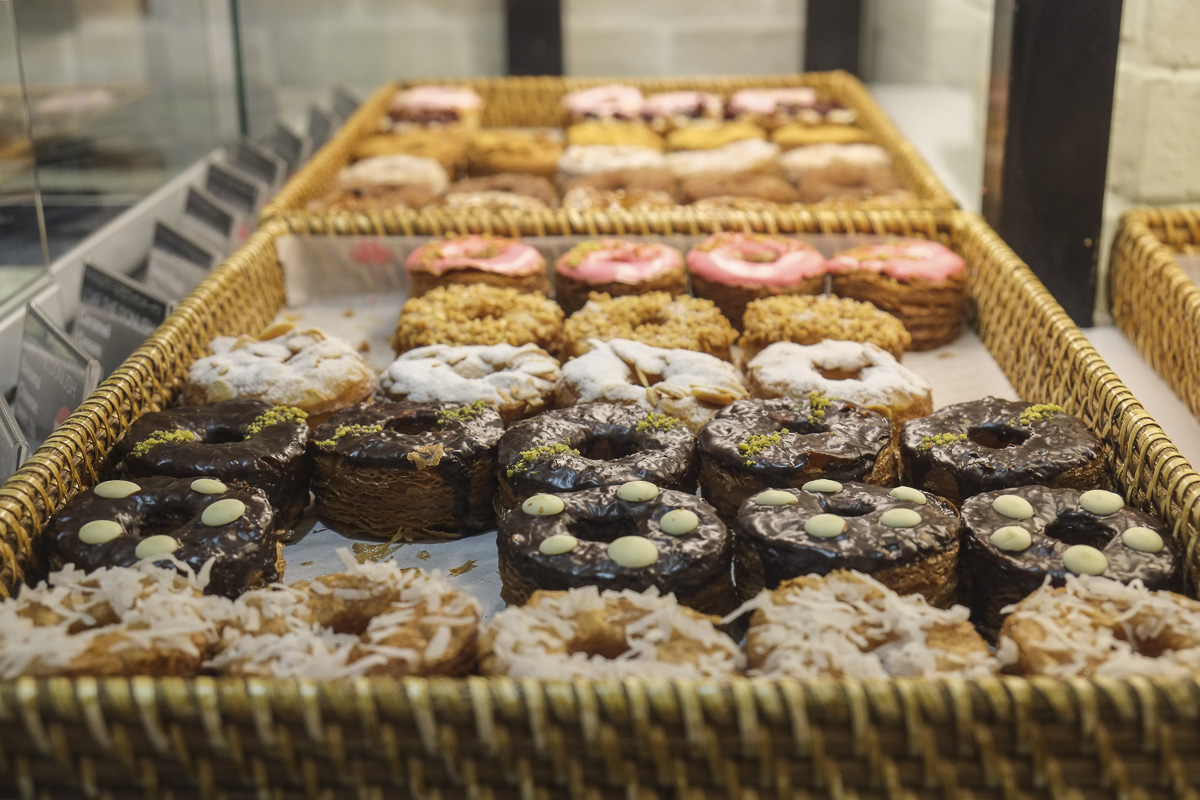 A NOTE ON VISAS: At Yogyakarta, you have to pay the visa fee in US Dollars and there is no ATM available before you reach the desk so bring the cash with you. However, as a British citizen you can travel to some Indonesian airports and get a 30 day visa waiver (ie, free entry), but Yogyakarta isn’t one of those. For full details and the latest info check out https://www.gov.uk/foreign-travel-advice/indonesia/entry-requirements 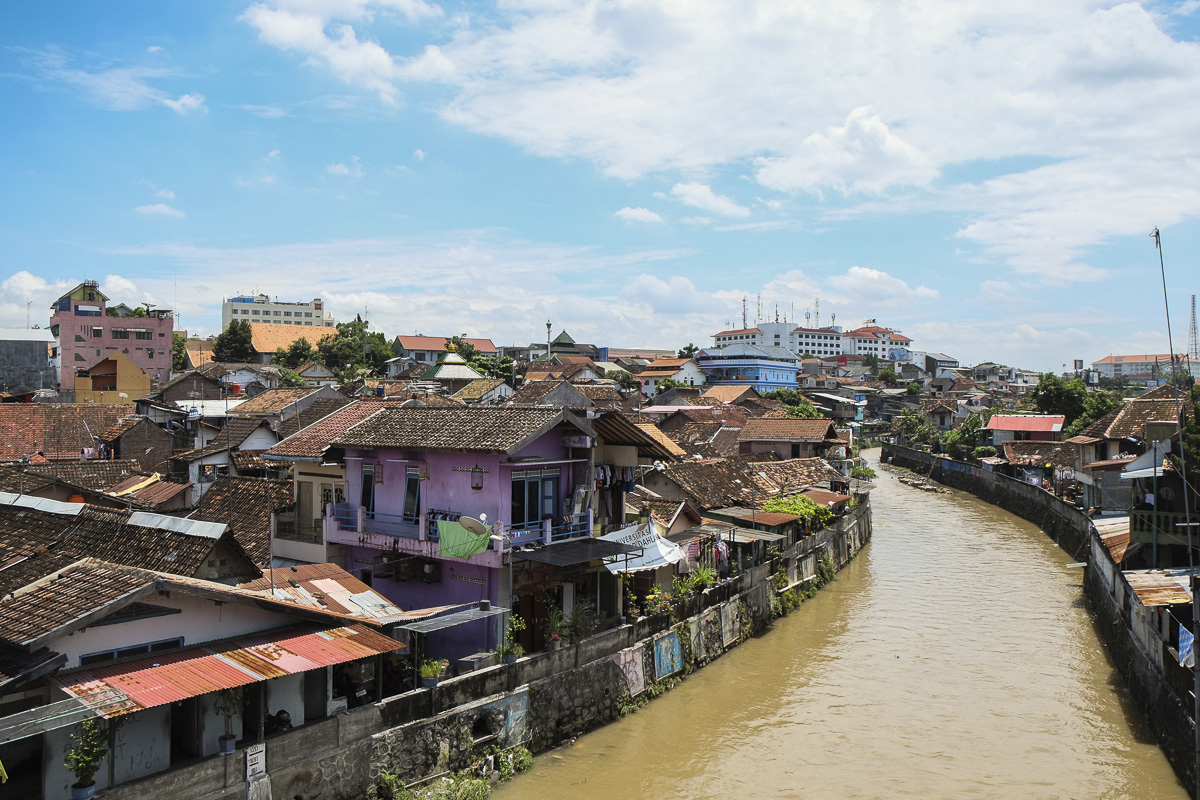 Once we were in the next step was getting to our accommodation. Once again, pre-planning was highly rewarding, I had downloaded the map of Jogja onto MAPS.ME and figured out the journey on public transport. Yogyakarta is a big city but if you want to get to the central location nice and cheap then here’s how:

Happy days – airport to town for 2 for £0.30! An official taxi should set you back around £2.50 which is still a bargain by most Western budgets, but if you are travelling on a shoestring the bus is miles cheaper and easy enough to negotiate.

We stayed in a place called Panca Dewi Guest House (found on booking.com) for £16 per night – it was one of the nicest guest houses we came across. Finished to a very high standard with air-con and a nice covered central patio area. It was about a 10 minute walk to Malioboro Road, so not the closest in terms of location, but the quality and price definitely made up for this. 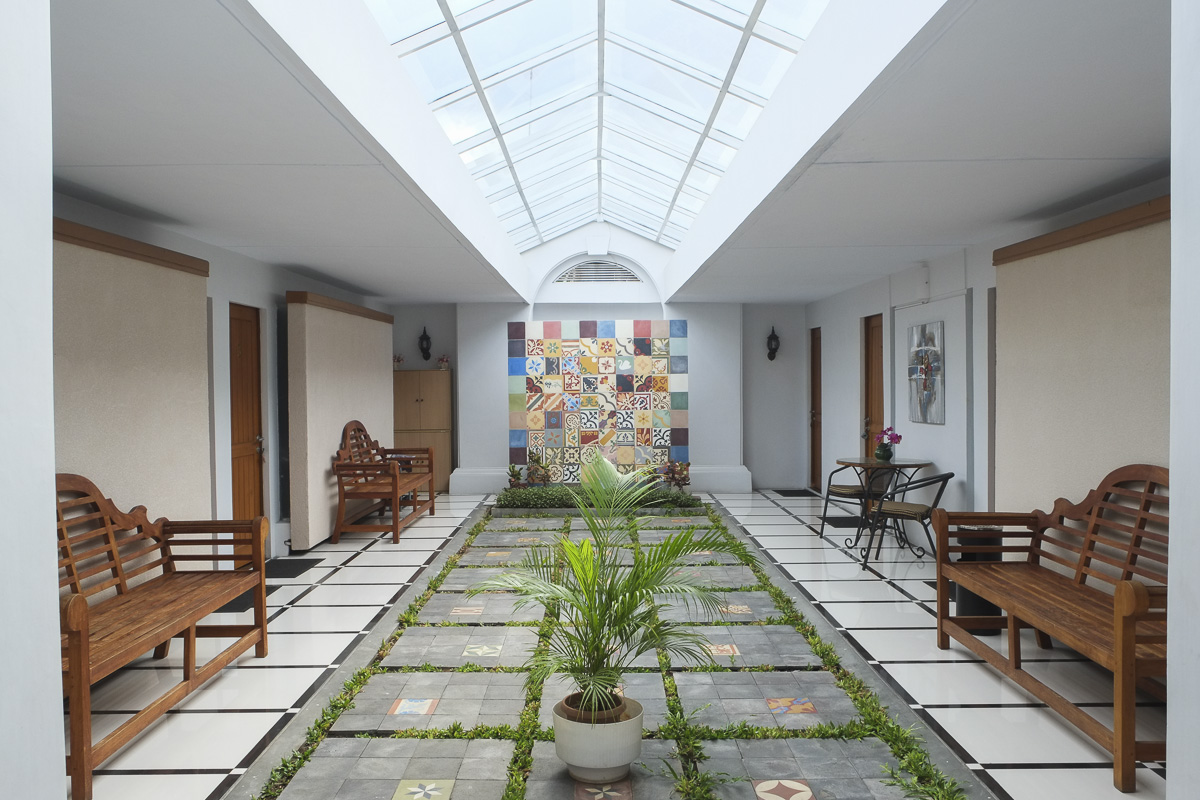 By the time we had settled in it was mid-afternoon. We were in Jogja primarily to visit the huge ancient temples of Prambanan and Borobudur so we went for a walk to the tourist hotspot of Jalan Sosrowijayan (or just Sosro to many) to get some lunch and scope out the local tour agencies and check out the prices etc. As per many of the Asian tourist destinations, there was an abundance of tour operators and we soon had a few different price lists and a plethora of options available.

We stopped in for lunch at a café called Batik Resto where we had our first taste of Indonesian cuisine whilst listening to reggae covers of famous songs (you haven’t heard Queen until you’ve heard Freddie Mercury over a reggae backing track). I went for the international classic, chicken satay, whilst Ali chose the more adventurous gado-gado – a dish consisting of potatoes, egg, vegetables and tempeh (like a meatier version of tofu) covered in a peanut sauce – which was excellent! A new entry for the list of favourite dishes.

After an afternoon chill during a passing thunderstorm (which seem to be a daily occurrence in Jogja in March) we head out for the evening. With Yogyakarta having the reputation as the capital of Javanese culture we were keen to enjoy some traditional entertainment. I liked the idea of a Wayang Kulit (shadow puppet) show with a traditional gamelan orchestra. There is a regular show at the Museum Sonobudoyo which was about a 20 minute walk from our accommodation. On the way there the heavens decided to open up once again – we had borrowed an umbrella from our guesthouse but it proved a pretty scant defence against the tropical rains. The water blew in sideways and bounced off the floor to ensure we were quite well soaked by the time we got to the museum – at least it was still warm! We bought our tickets to the show and made our way inside just before showtime… to find we were the only spectators for the evening! A kind man showed us around, told us we could take off our wet shoes and socks, and explained that they had seating on either side, so you could watch the show or get the behind-the-scenes view and see the orchestra and puppeteer at work – pretty cool. 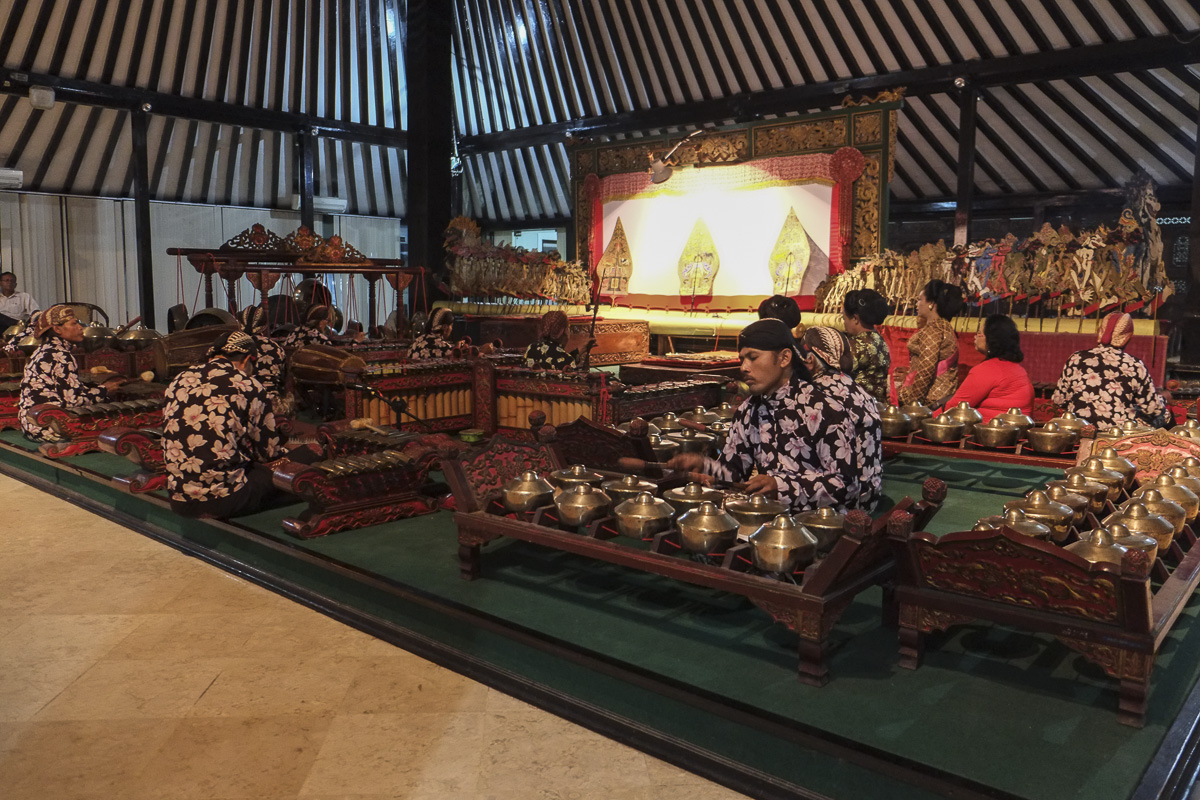 Two more people joined us right before the start so we weren’t entirely alone watching the performance. However it still seemed strange given there were around 20-odd people working there including the orchestra. The show was a segment of a Hindu epic, the Ramayana, and depicted the first couple of acts, but unfortunately it wasn’t great. The music was cool and the intricacy of the shadow puppets is impressive indeed, but a lack of understanding of the Bahasa Indonesian language meant it was pretty tricky to follow (even though we knew the outline of the story already) and it seemed to drag on forever. Without understanding the dialog all you have is an old man smashing puppets together and shouting incomprehensibly. Apparently full shadow puppet shows can run to 8 hours or more. This one was two hours but we couldn’t take more than one and shamefully ducked out just over halfway through! 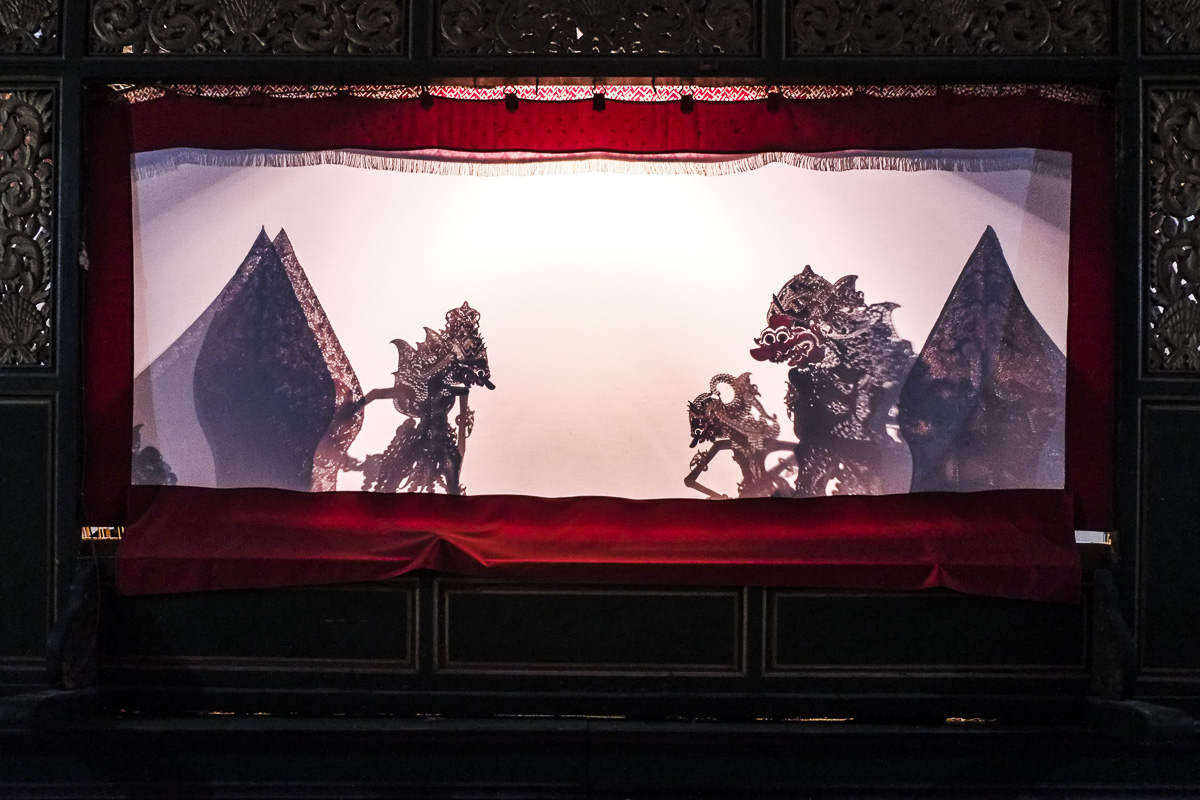 Luckily the rains had now passed and we were able to head back in relative peace and prepare for Day 2 in Jogja, which was all about visiting the ancient Hindu temple of Prambanan. 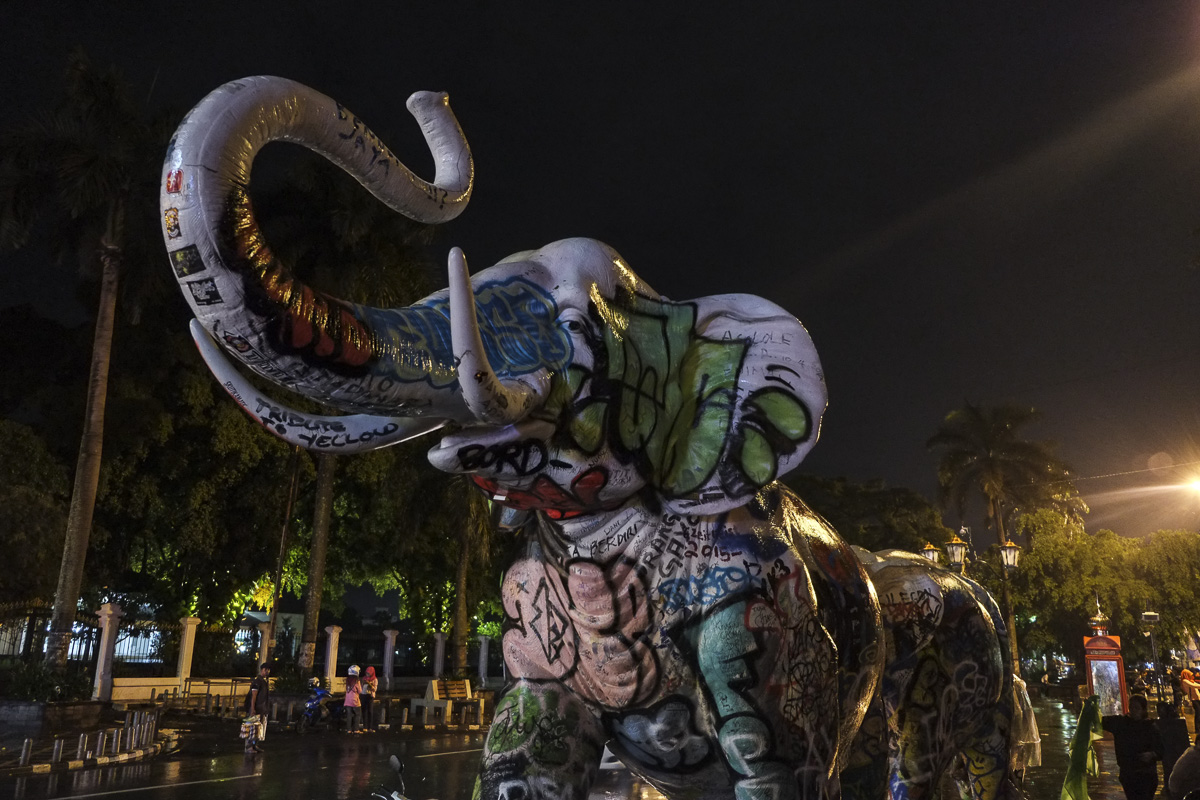