As well as being ‘home of Javanese culture’ Yogyakarta also boasts two extremely impressive ancient temple sites – Prambanan and Borobudur. Our second day in the city was dedicated to seeing the Hindu temple of Prambanan which lies on the Eastern side of town. The many tour operators in Jogja all offer trips to both temples, with combo deals aplenty. However for the truly savvy traveller there is an even cheaper way to see Prambanan – by getting the Trans Jogja bus. It is actually the same bus that goes from the airport into town, the 1A, so if you jump back on it heading in the opposite direction you are about a 45 minutes ride from the site at the same bargain rate of £0.30 each.

Prambanan is the end of the 1A route – the bus pulls into a small station and lets everyone off. You’ll be right near a main road on the other side of which is the edge of the park. Walk east down the road (further away from town) and eventually you’ll be able to enter the site on your right through a car park. See this handy map I whipped up… 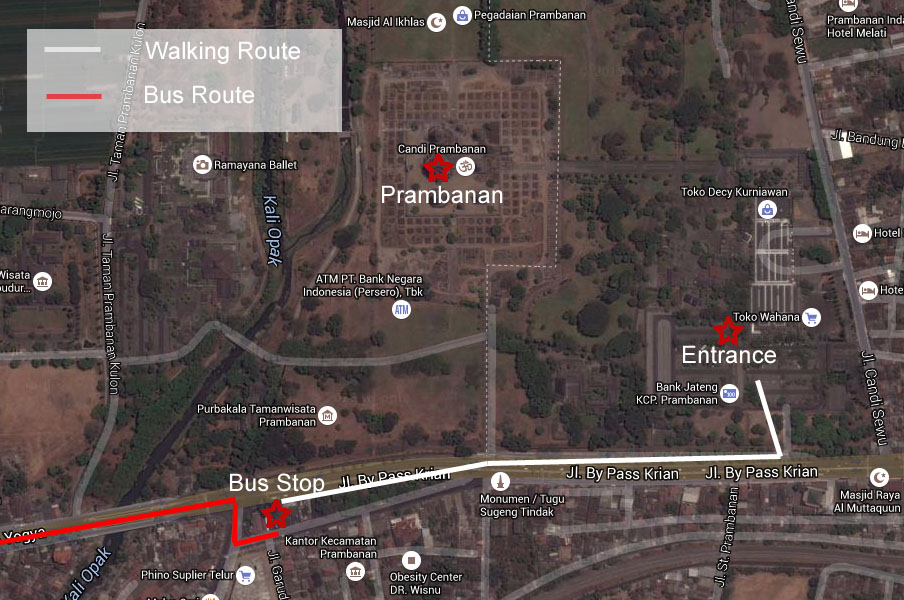 In the site you can cut through the car park to the main entrance. There is a separate entrance for foreigners where you can buy your ticket. If you are going to see Borobudur as well, here you can get a combined ticket to see both attractions – the cost to us in 2015 was $25 each. A ticket for just Prambanan is $15 In a nice gesture you also get a bottle of water and a cup of tea in the air conditioned entrance hall (Angkor ticket booths take note). The site is well mapped and it’s pretty hard to miss the huge temple to your left when you enter. 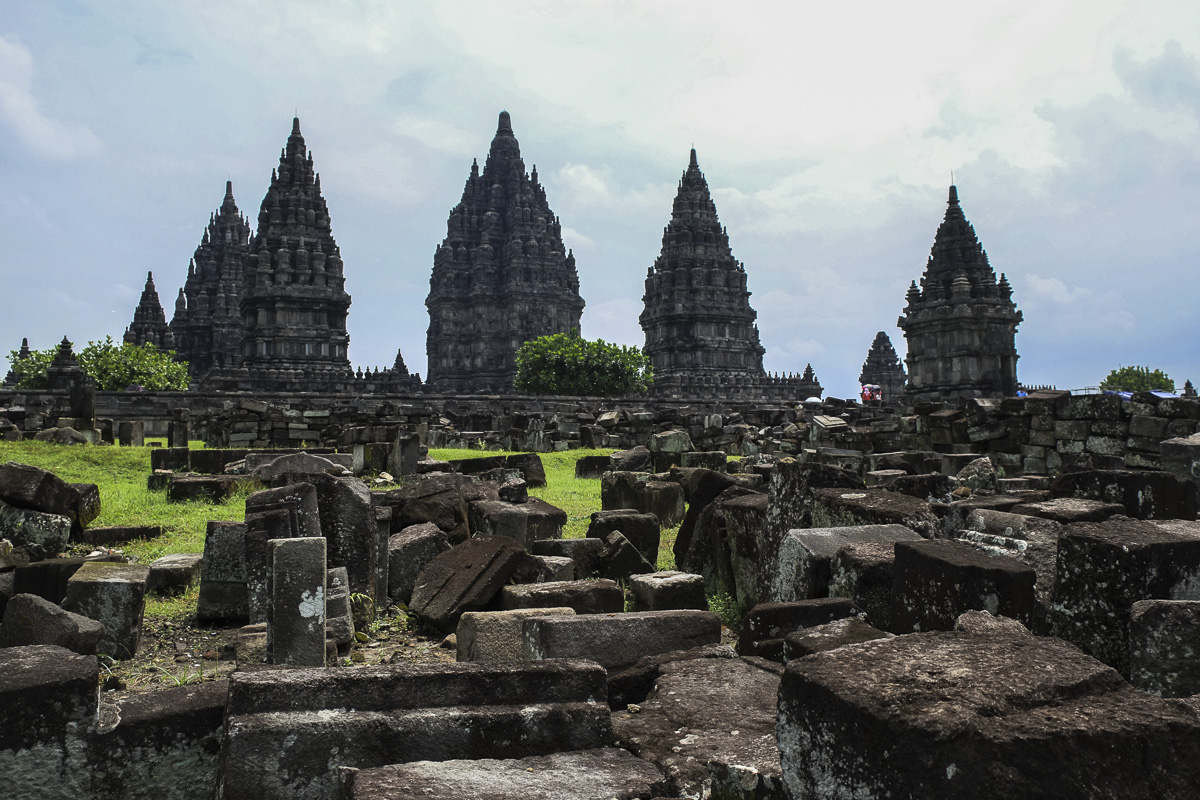 The park is a bit sterile compared to the untamed jungle look of the Angkor complex or the beautiful ruins of Indein, however given it’s close to a big sprawling city, at least the Indonesian government have given it significant well maintained grounds to sit in. I’m a sucker for some overgrown ruins but I know it’s not everyone’s cup of tea. 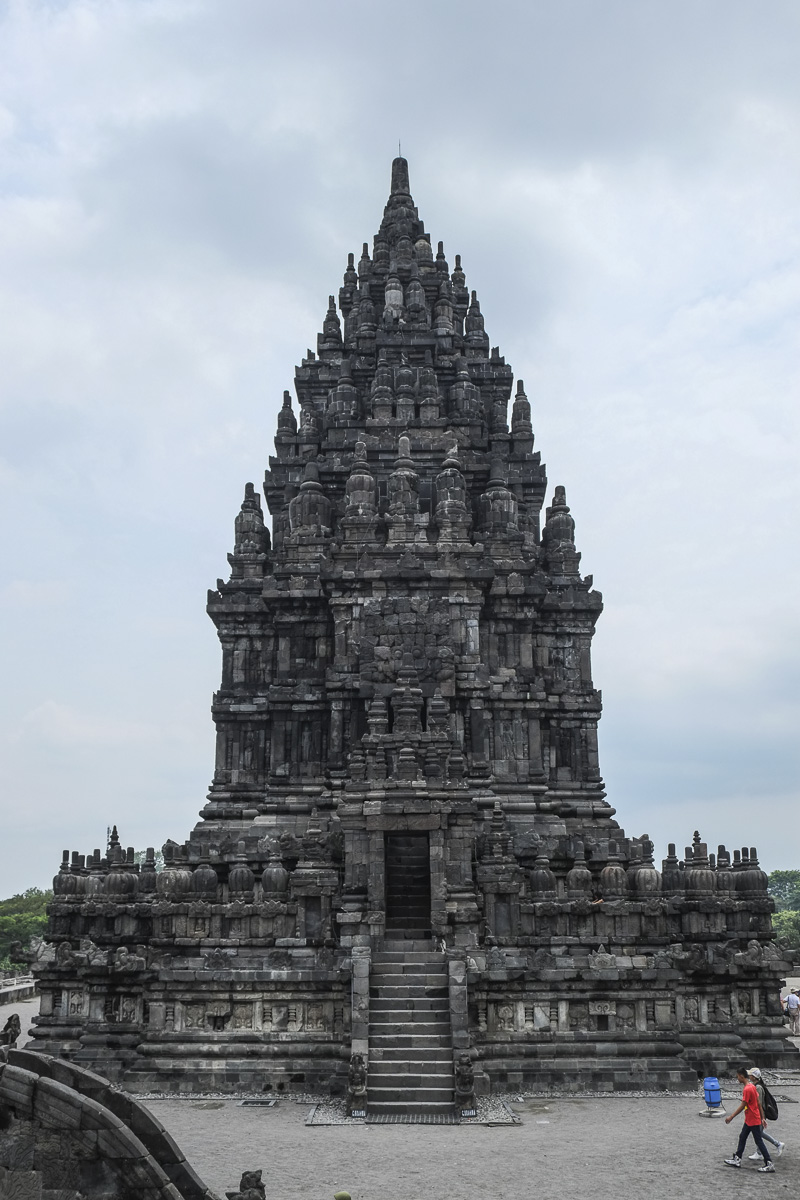 The main temple itself is very impressive, especially given it’s over 1000 years old. The three huge towers which dominate the site are dedicated to each of the three deities – Brahma, Shiva and Vishnu – with smaller stupas for worshipping their respective animal mounts. It wasn’t too busy by Asian tourism standards and we had a good wander round the site, admiring the carvings and statues. I’d also recommend a walk around the full perimeter if you want a chance at a photo with no-one else in it. The Western side of the monument is very quiet and peaceful as many tour groups just whizz in and out. 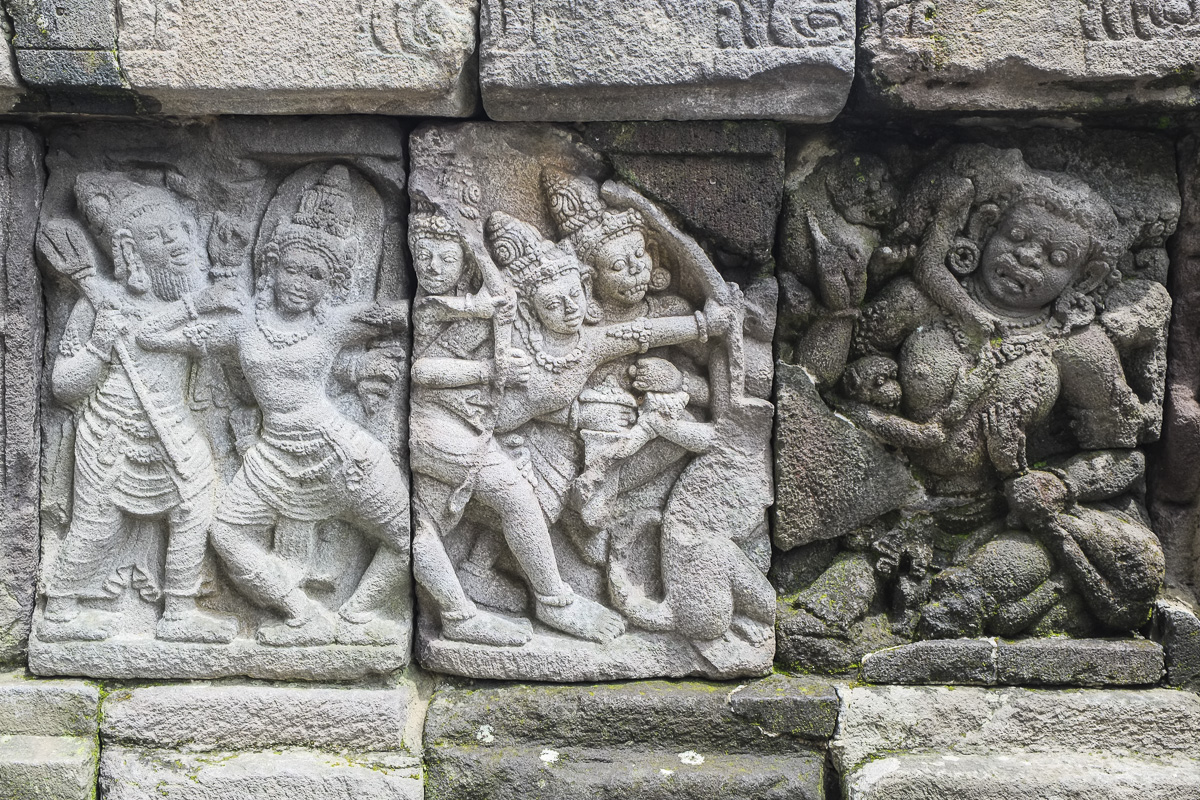 The relief carvings at Prambanan

As we were finishing up the sky began to darken, there are other smaller temples in the park but we took the signs as a warning to hurry on out. We still had time to grab a bite to eat in the cheap and cheerful restaurant which is a good shout for lunch. On the way out we also made Ali’s day by stopping to feed the many deer which they have in an enclosure. 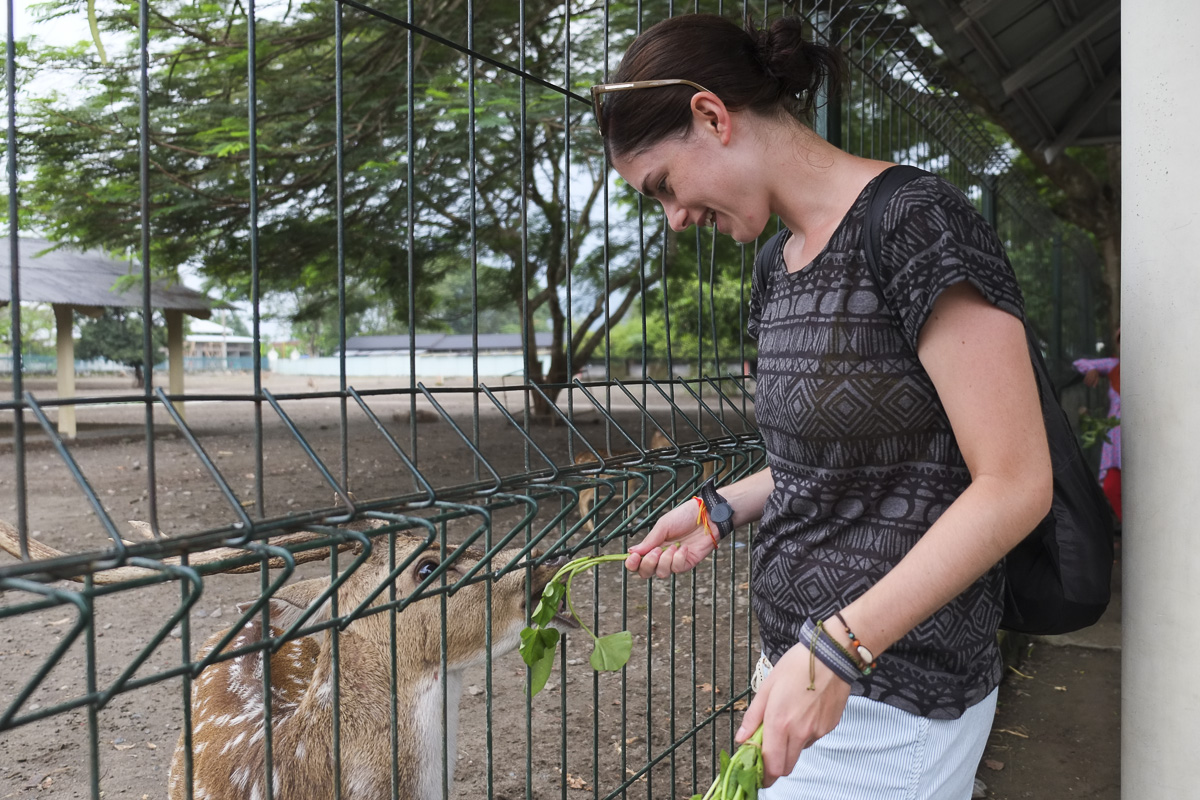 The daily storm kicked in on our way out of the park – the standard tourist-trap market stalls lining the exit route provided shelter for a short time but soon we were out on our own. It was a definite test for our trusty waterproof jackets, which aren’t exactly comfortable when it’s raining but still 30 degrees! The rain eased off as we got back to the bus shelter and returned back to central Jogja on the trusty 1A. 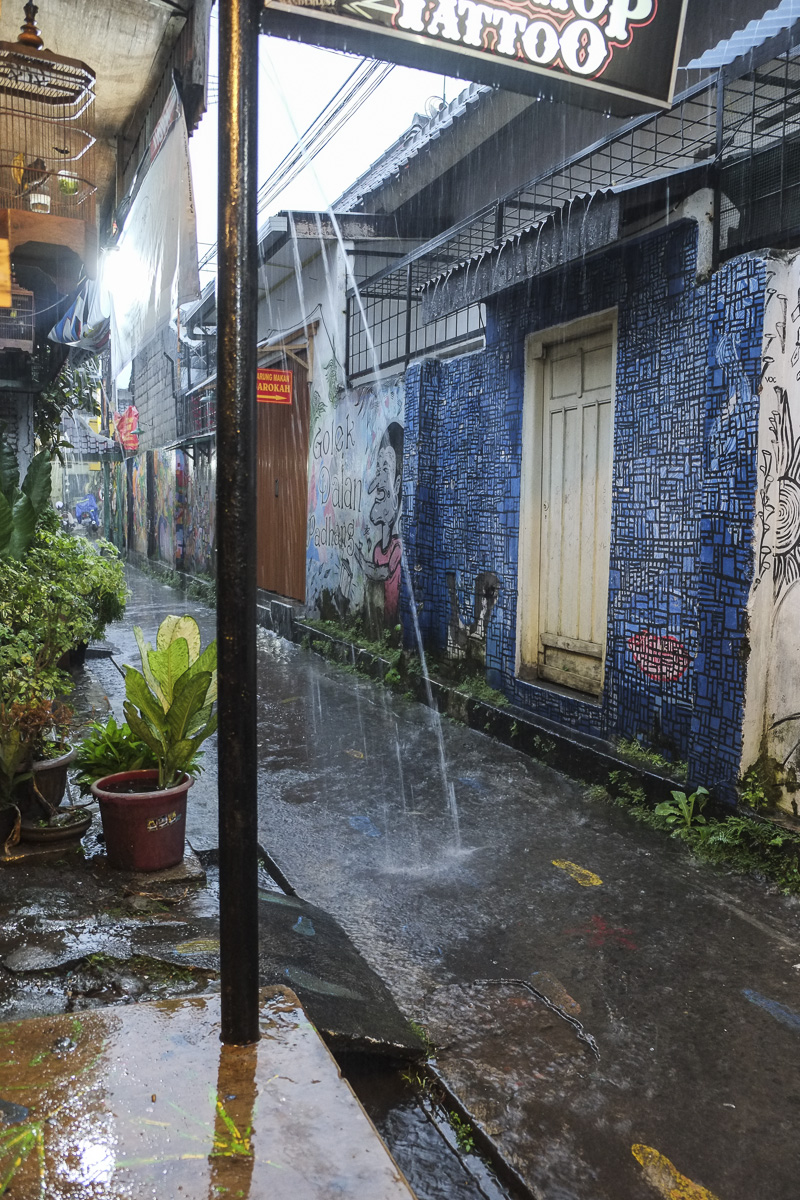 Once we were back we had to head out to book our excursion to Borobudur for the following morning. We had acquired a few price lists from Jalan Sosro and so we had an idea of what we wanted and how much it would be. Initially I wanted to see the sunrise from inside the temple but it turned out that the temple doesn’t open until 6am. However you can watch the sunrise from Setumbu Hill for a stunning view before continuing your tour to the temple. We ended up booking for a Setumbu sunrise + Borobudur package whereby we would get picked up around 3.30am and driven between the various sites.

Later that evening we went out for some traditional Indonesian food. We’d really recommend the Legian Garden restaurant which has a first floor terrace looking over Jalan Malioboro. Once again I went for a mixed satay selection with some killer prawns & fish skewers while Ali had the Yogyakarta local specialty, Gudeg. This unusual dish combined chicken in a coconut stew with young jackfruit and was really delicious!