Day 3 in Yogyakarta and it was time for an early rise. Our alarm went off shortly after 3am and we threw on some layers. It would be chilly on the hillside for the sunrise but it would soon warm up later in the morning. We were picked up in a minibus at 4am by our driver, and after making our way round to a few other pickups we were en route to Setumbu Hill. We arrived in the dark just before 5am – if you are planning this trip bring a flashlight for the walk – and made our way up to the entrance. There is an entry fee to climb the hill but it’s only 30,000 IDR (£1.50). There is also a little stall selling food & hot drinks if you fancy a cup of java. 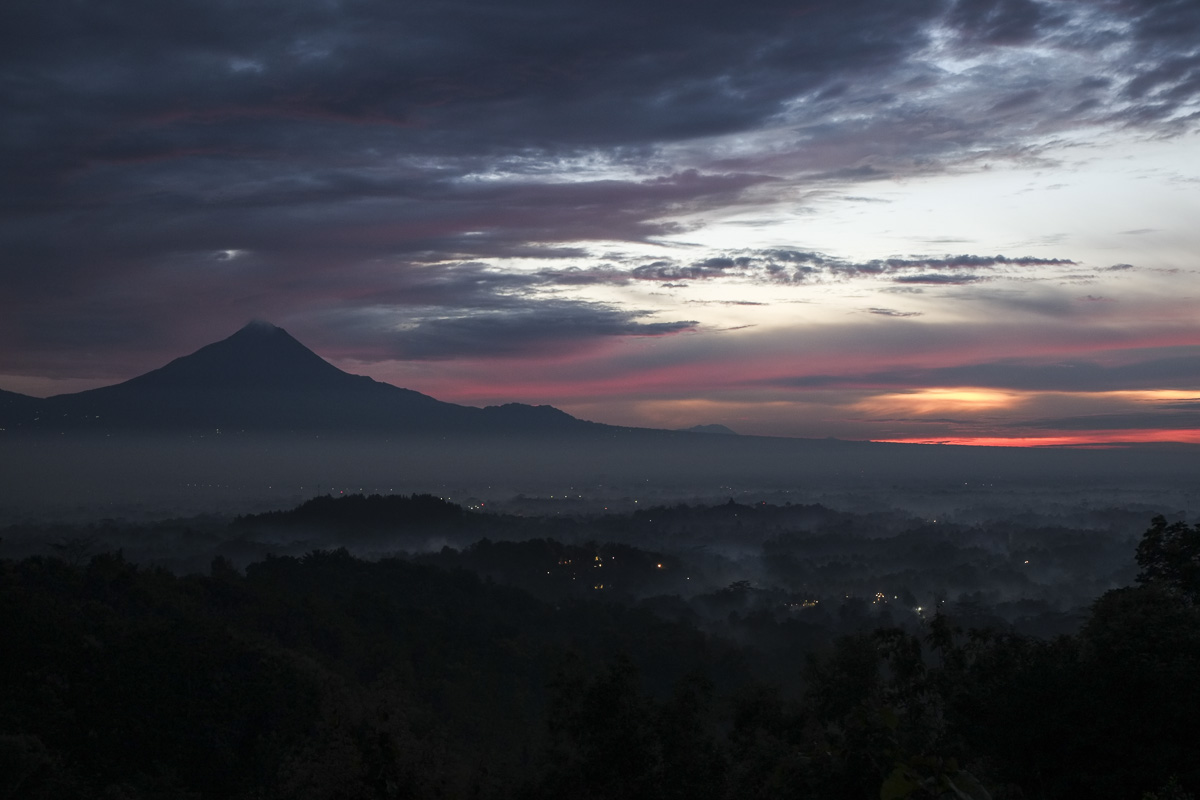 The walk up the hill takes about 10 minutes. It’s not too strenuous but can be a little muddy in parts. Up near the top there is a small toilet block and a viewing area. There were already quite a few people waiting for the sunrise but I now compare everything to the cacophony of Angkor Wat and by those standards it was pretty relaxing! We managed to get a place in front of the information sign which was a perfect place so get my mini-tripod set up for some pictures. By this point there was light on the horizon and the sky started transforming. Over the next hour the view emerged of two huge volcanoes on the horizon, with Borobudur sticking out of the forest below, beautifully picked out by the morning mist and the angle of the light. It was a really serene peaceful sunrise and well worth a watch. By all means take some photos but don’t go crazy – remember to soak in the view and experience with your own senses too. 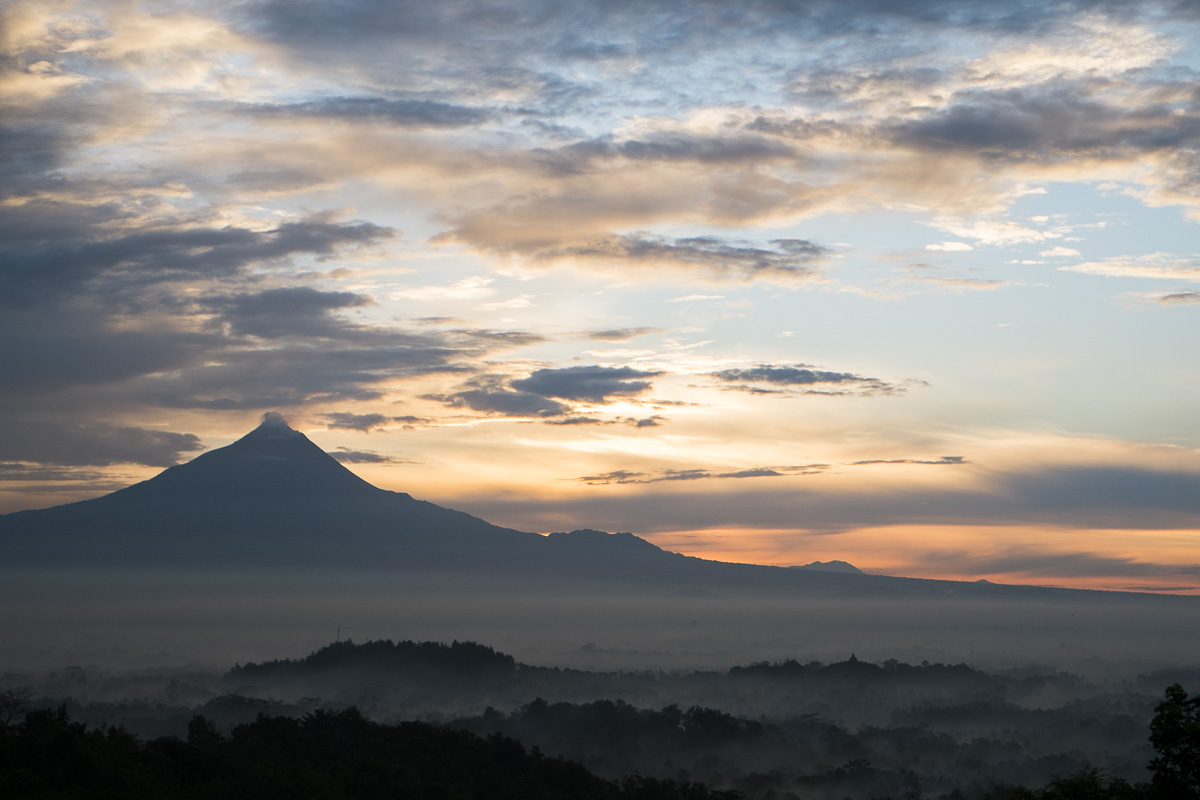 It was just beginning to rain a little by the time we were heading back down. Luckily it was only a morning shower and not another storm! Our minibus drove us onward to Borobudur and arrived around 7am – the driver offered to sort out tickets for those who didn’t have them but left us to it when he saw we had our combo tickets from the previous day. He also sorted us out with a ticket to get some breakfast from a food stand outside the temple site (included in our tour price of £10/$15 each) and told us we would leave again at 11am. We decided to see the temple before eating, given it would only get busier as the day went on.

On arrival it was already pretty busy! Once again we got a very welcomed cup of tea upon arrival (Note to anyone in the industry: This should happen at all tourist attractions worldwide!) and made our way into the site to see some big groups of kids entering from the ‘Locals Entrance’. It would appear we had come during the Indonesian school holidays and many schools from around the country used this opportunity for trips to their heritage sites. Lucky us! 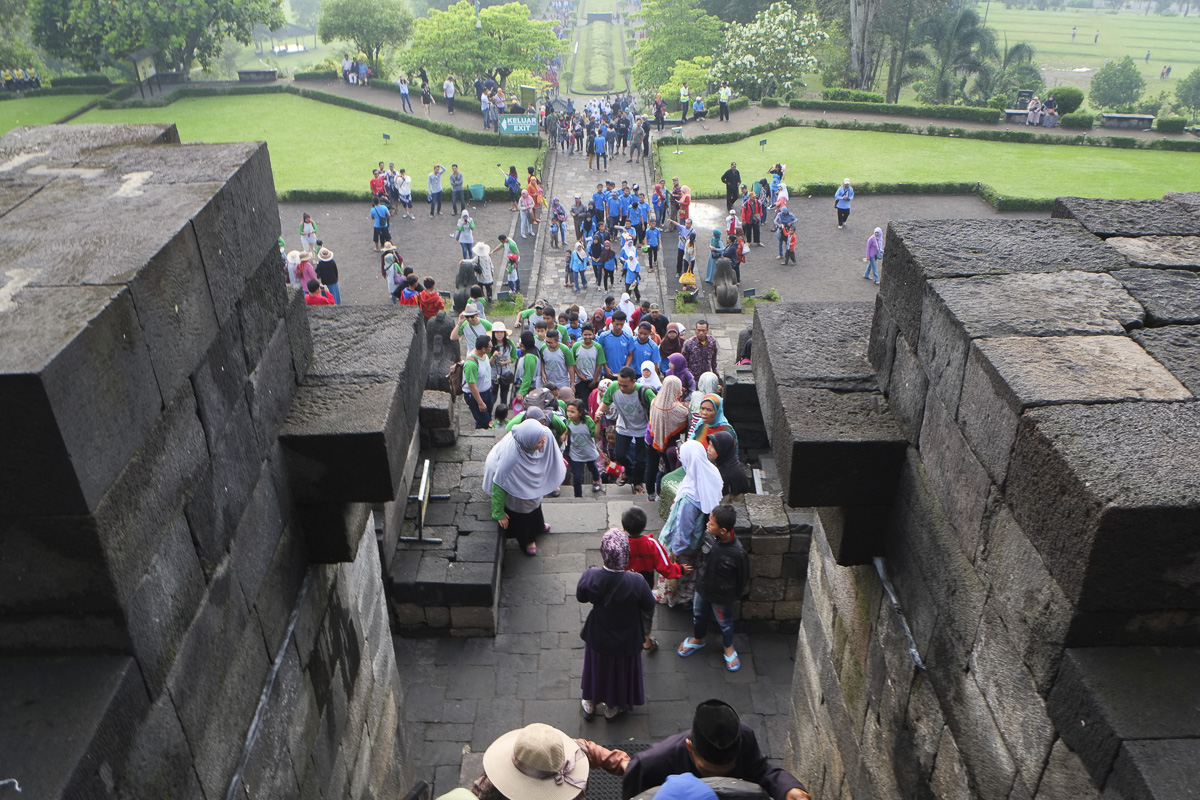 We soon became a novelty to the groups of school children and must have had a few hundred photos taken of us. It was pretty fun – we felt like a sweaty posh & becks – and the kids loved it even more when I wanted to take a selfie with them! 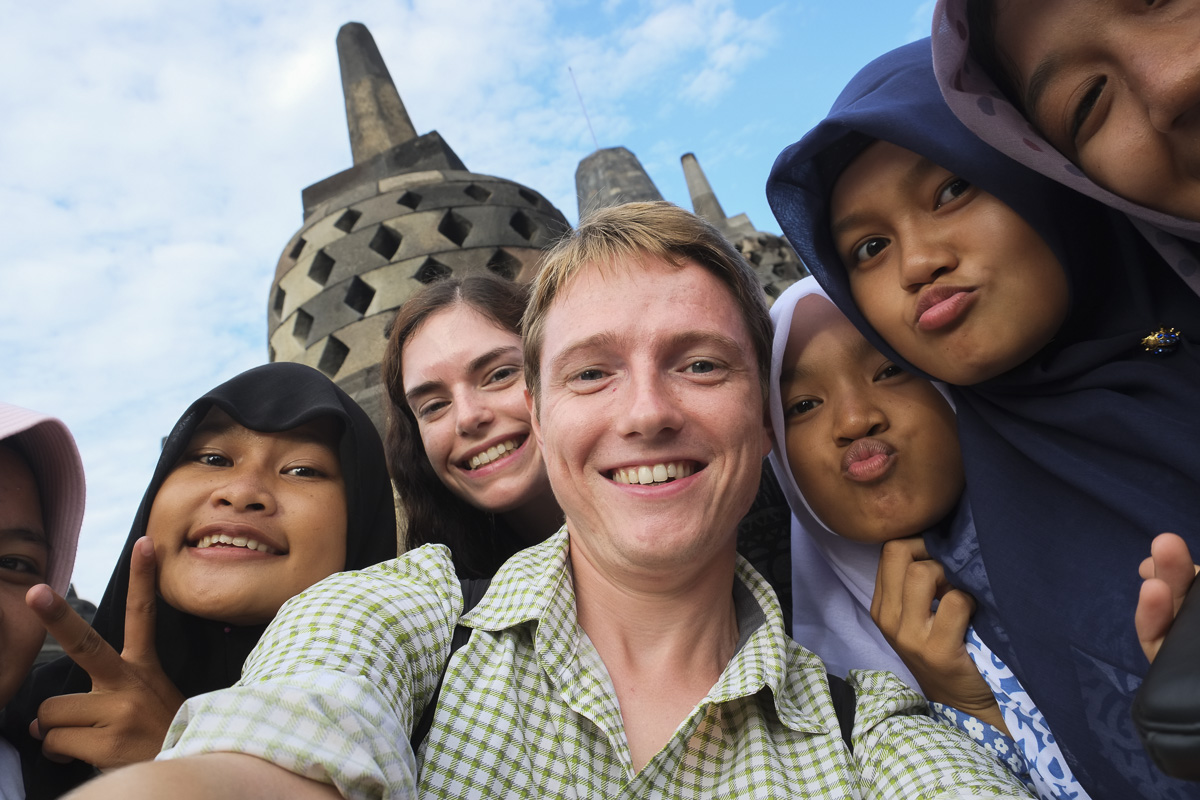 After about 15 minutes we arrived at the bottom of Borobudur. This Bhuddist temple is enormous – the third largest in the world – and pre-dates the Angkor Wat temple by a good 3 centuries or so. It is constructed of nine stacked layers representing the base of man and the journey upwards to enlightenment. We walked around each layer admiring the carvings and statues before heading up to the top. 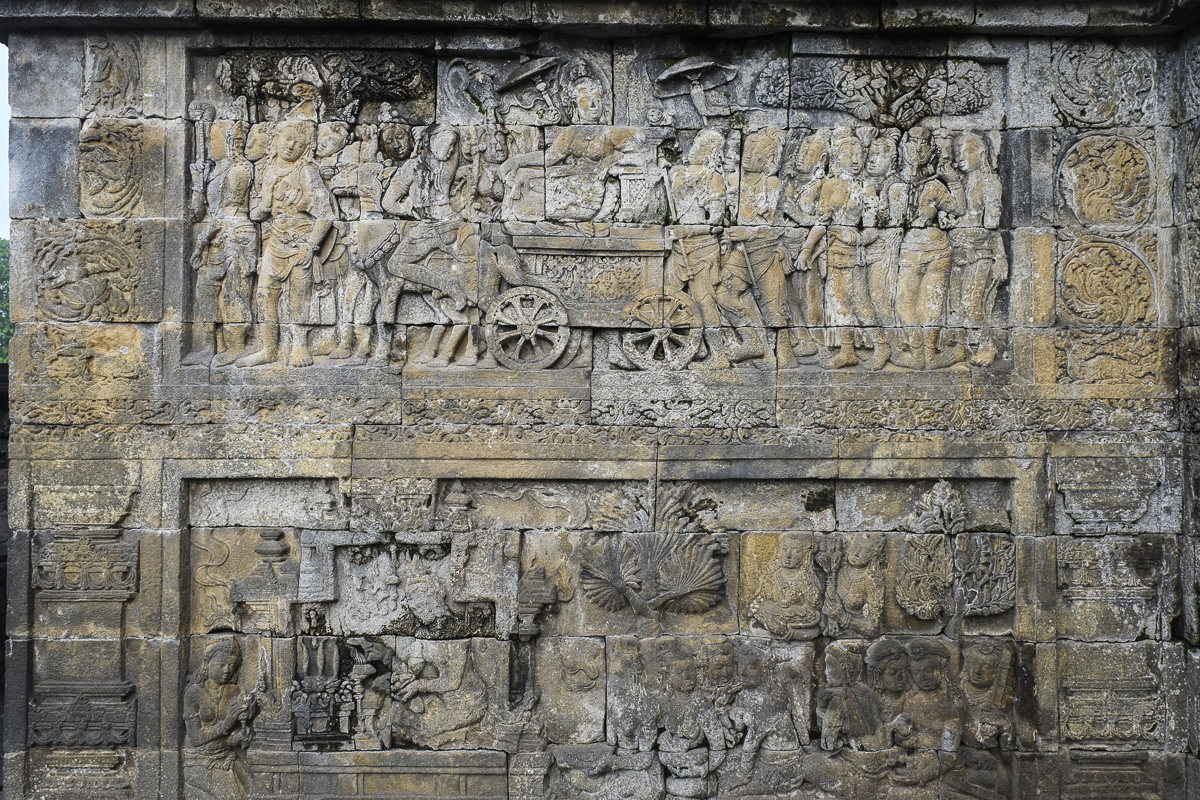 The open air top layer is quite majestic, with fantastic views of the surrounding jungle and volcanoes. The top is also littered with small stupas and statues of the Bhudda which are looking outwards over the world. Pretty enlightening stuff. Once again there were more groups of schoolkids everywhere vying for a picture with a tourist. Great fun! 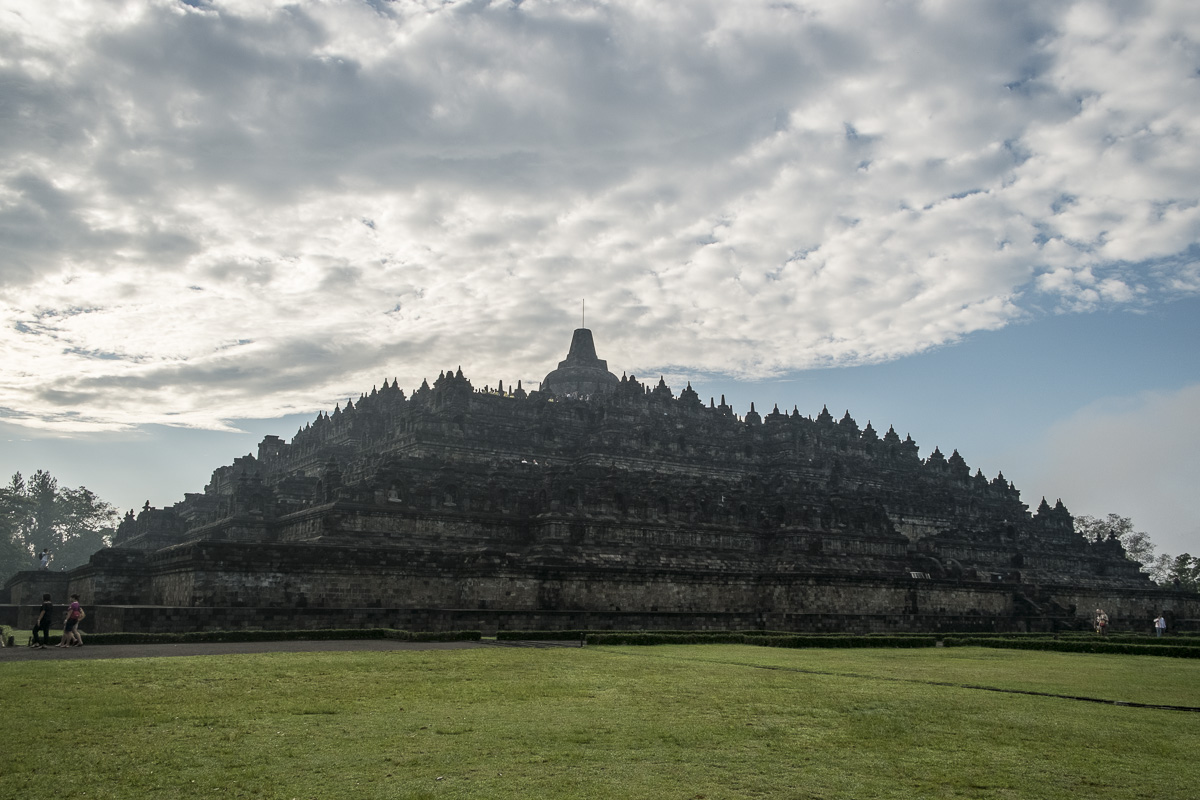 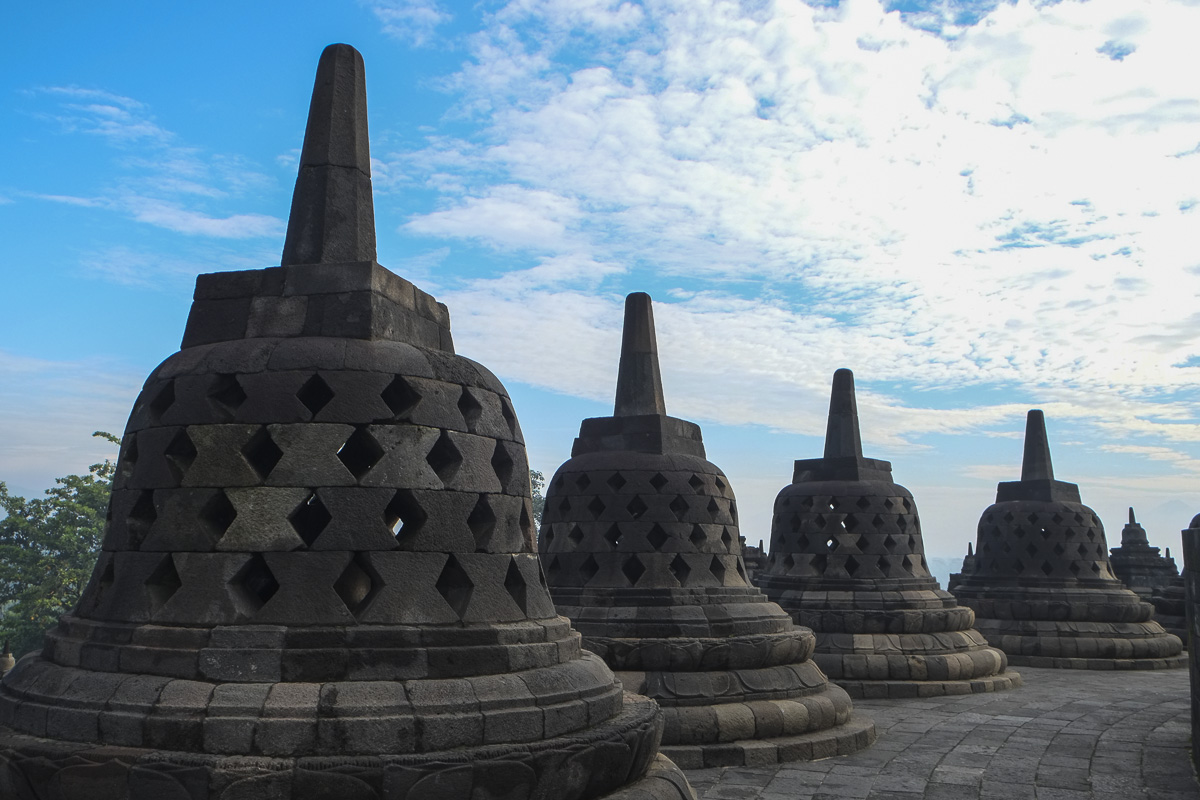 Borobudur is well worth a visit for anyone heading to Java. It’s a really impressive ancient site and adding in the sunrise will make for a spectacular morning. Just don’t expect to be able to get a snap with no one else in it! 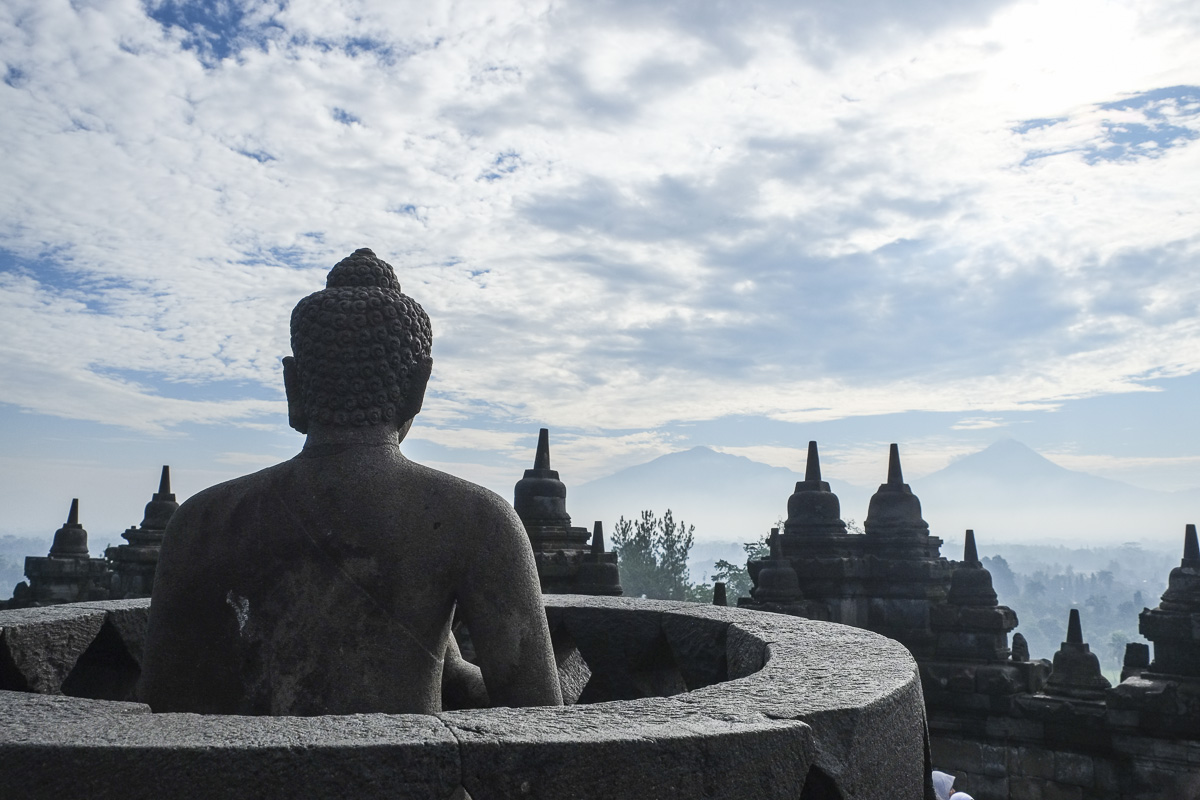 After returning from Borobudur we had to decide and arrange where to go next. My initial plan was for an overland to Bali incorporating a visit to the volcanoes of Bromo and Ijen. Unfortunately quite a few things conspired against us to scupper these plans. The easiest way to do this involves being minibussed around for the whole trip. However with the opening journey being an excruciating 11 hour minibus ride from Jogja, and after a similar 6 hour drive in Laos, neither of us were keen on that! A bit of research revealed that you could make this journey yourself, with a train & bus making up the first leg to Mt Bromo.

Eventually I had it all worked out to do it this way and got all psyched up for the adventure, but after walking to the train station to book the tickets (cue more torrential rain) it turned out to be fully booked for the following day and we didn’t really have the time to hang around any later. Eventually we decided that we’d have to skip over these plans and the best course was to just fly straight to Bali and score an extra couple of days relaxing there. There was a cheap enough flight the following morning so I booked that in and we prepared to move on to Bali.