One of the alleged highlights of a visit to Luang Prabang is supposed to be an early rise to see the many monks of the town walk the streets at dawn to collect alms from the locals. They are given rice by local people who line the streets to pay their respects. What they collect will constitute each monk’s daily food. 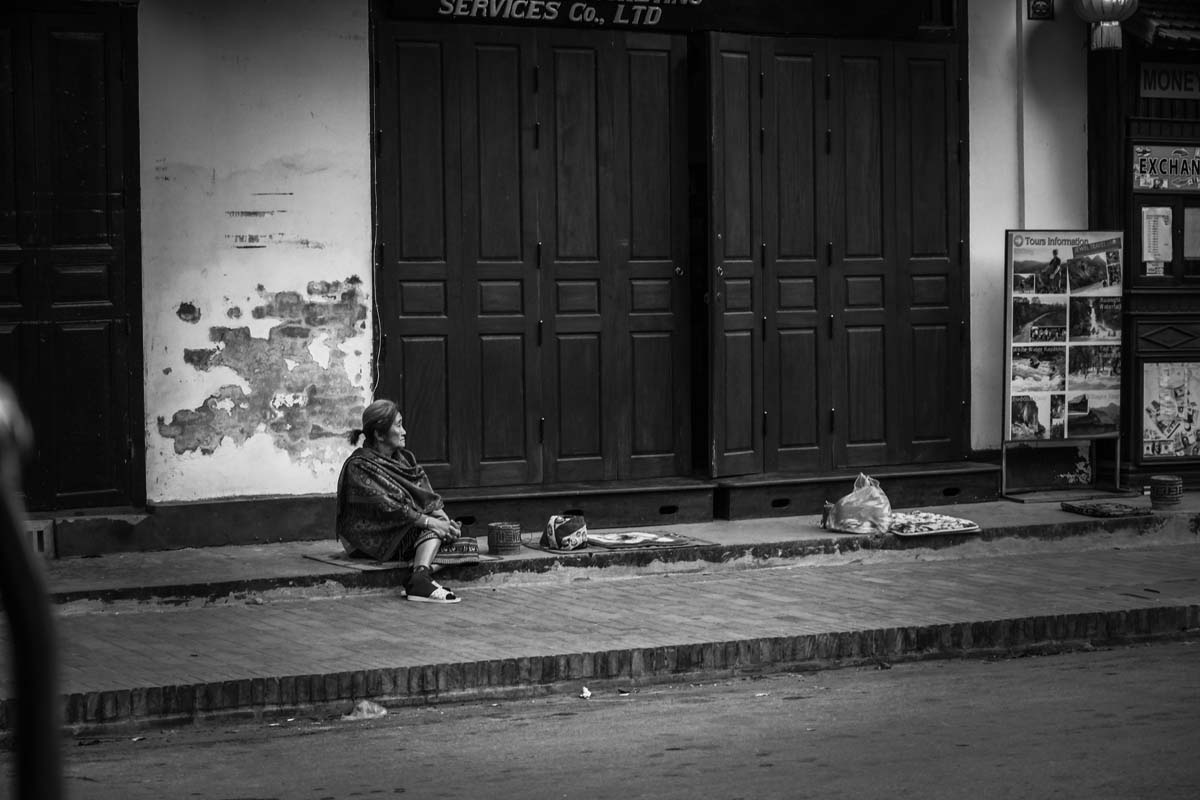 Unfortunately as is often the case now in South East Asia, the tranquil beauty of the scene has been shattered by the increase in tourist numbers. Tourists are dissuaded from taking part in the alms giving unless it means something to them (ie, they follow Bhuddism) and are urged to be quiet and respectful whilst it takes place.

It would seem many tourists didn’t get the memo, especially the Chinese tour buses. 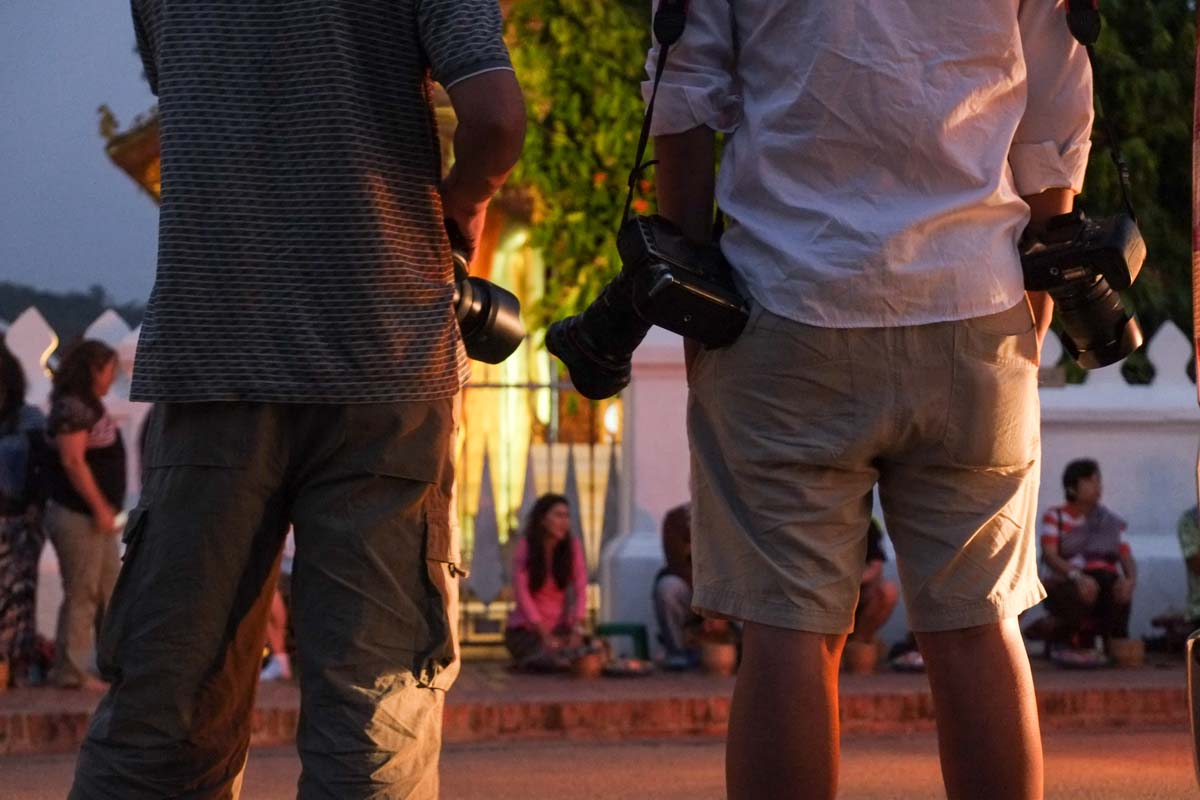 I rolled out of bed around 5.30am and went out to the streets. I had a couple of days to have a go at seeing/shooting the ceremony so for the first day I thought to head to the busiest end of town (as far as temples go). It was still dark but was getting busier and busier as I got closer to the centre of town. Minibuses had arrived from out of town and tour guides were setting up places for throngs of tourists to take part, local ‘entrepreneurs’ were on hand to sell them all rice to give (apparently of questionable quality) and the tranquility was disappearing as quickly as the darkness.

On the opposite side of the street were even more people toting cameras and phones and waiting. The time the alms giving started was 6.07am and that was the busiest I ever saw the streets of Luang Prabang. 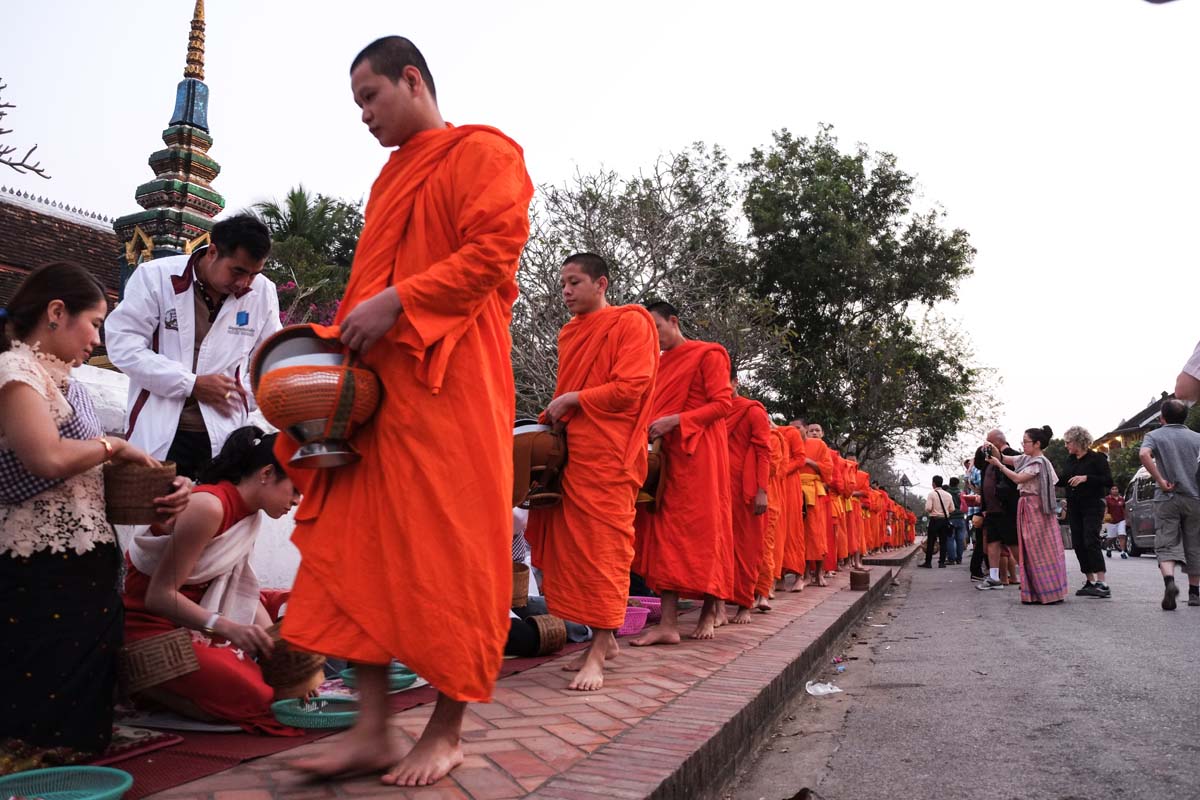 To be fair, the monks filing out their homes and slowly making their way down the street did make quite a sight. Respect would see all photographers stay a reasonable distance and refrain from using flash but many people were getting right up close to to the monks and clearly disrupting the progress. I noticed some monks skip over the obvious tourists when collecting their rice too. 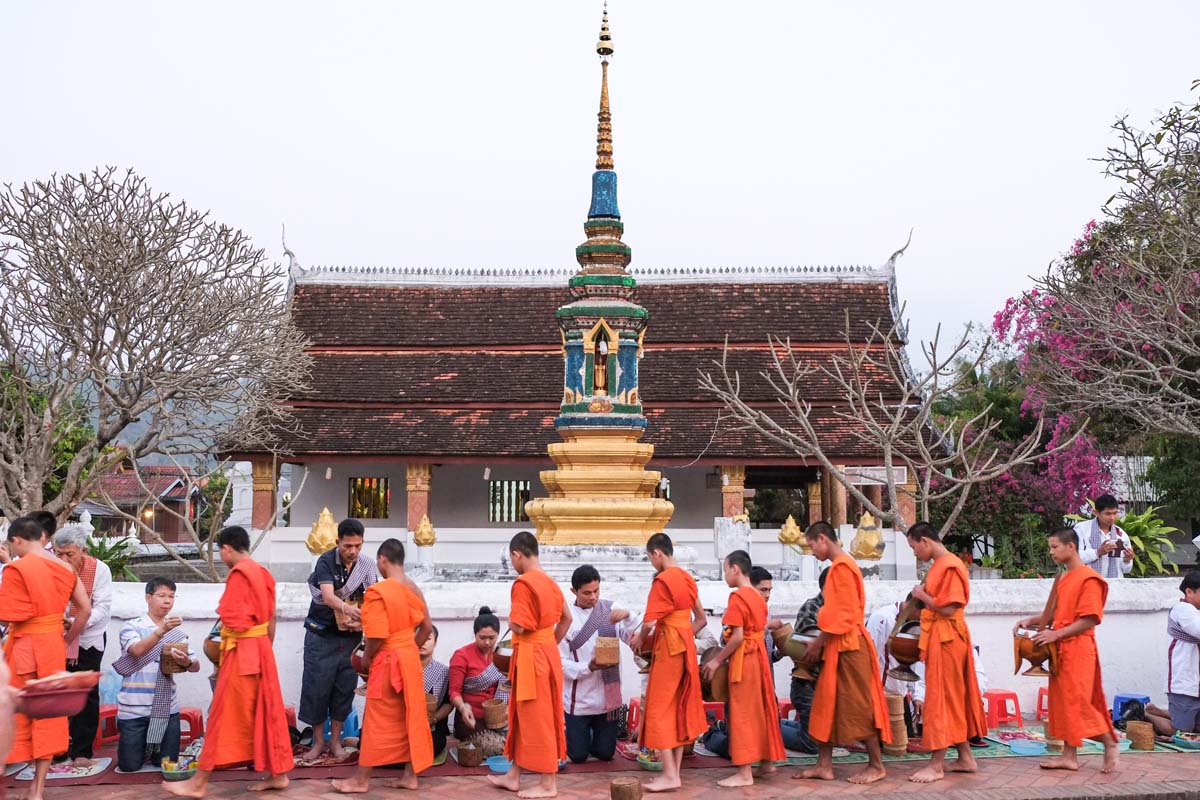 I tried to hold back but ended up getting closer than I would have liked. After the first group had passed a loud American man asked his guide “Is that it?”. More groups came but after about 15 minutes many of the spaces along the street were empty. Those tourists clearly felt they had gained enough karma for the day. 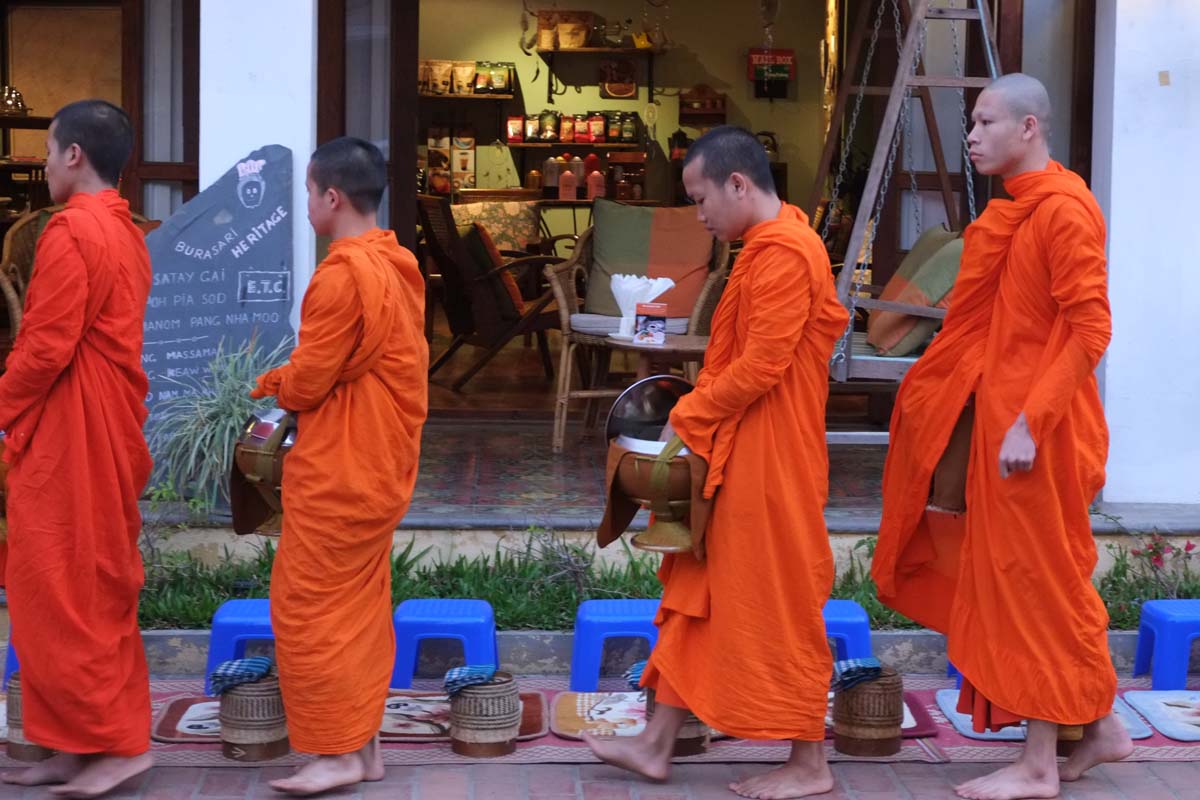 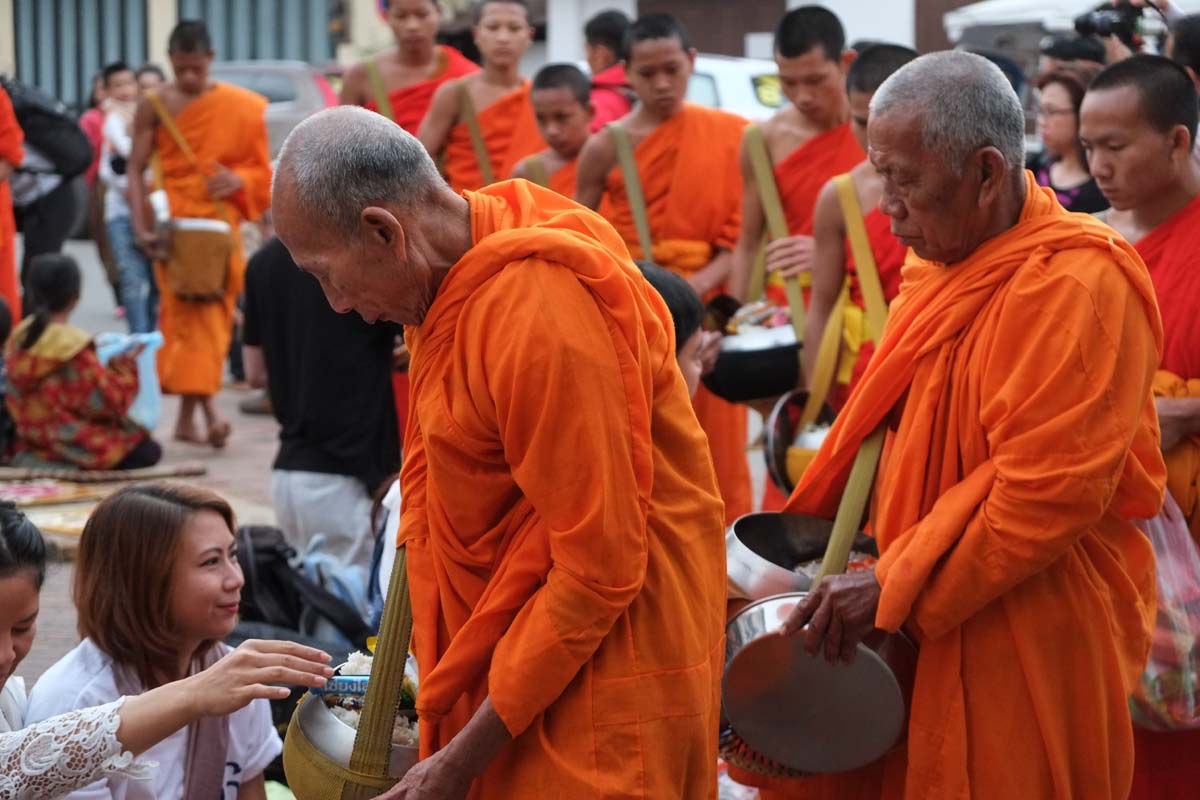 I returned quite jaded from the experience but decided to give it another go the following morning. This time I stayed at the quieter, south-west end of town. There were a couple of temples here still, and a few tourists inevitability, but it made for a much calmer scene. If you were to go out to see the ceremony, I’d recommend finding somewhere like this instead of heading to the obvious places. 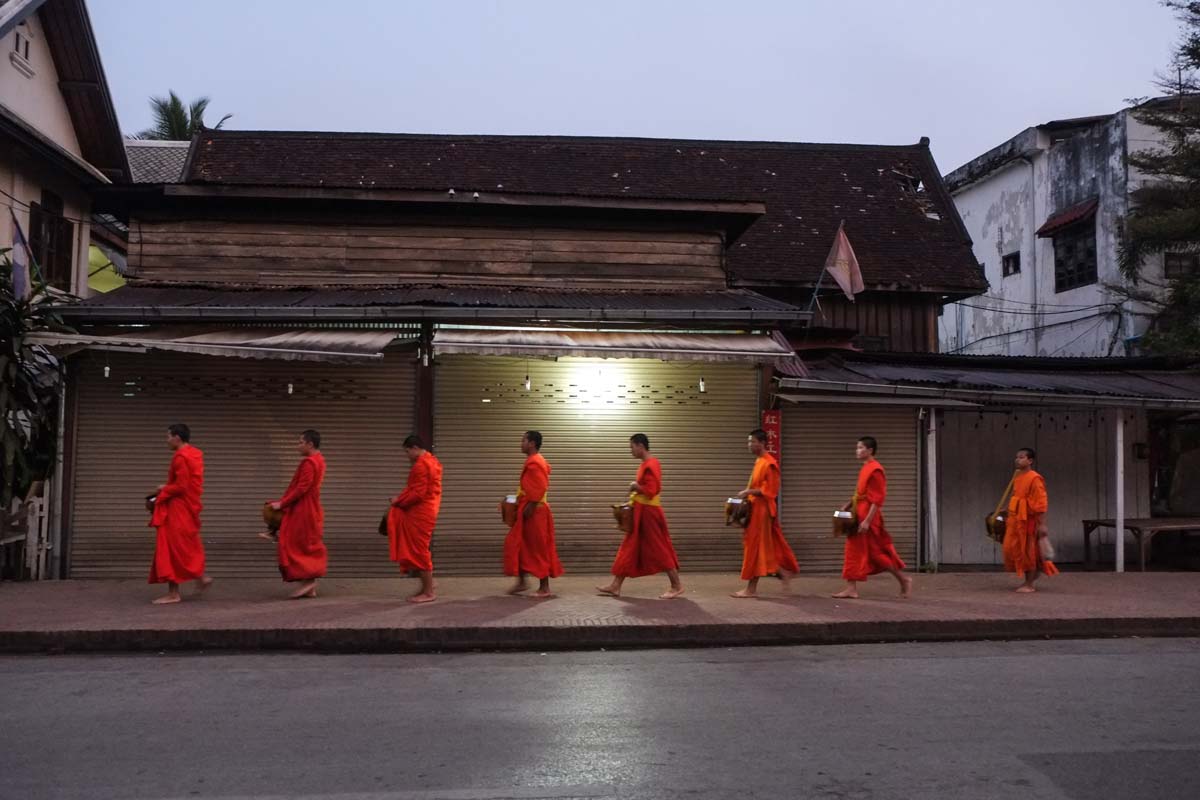 After a couple more futile attempts to get a shot without another tourist in, I decided to try and shoot things in a different way: an abstract long exposure would ensure any wandering tourist didnt make an impact on my image, but the monks bright orange robes surely would. This led to my favourite shot… 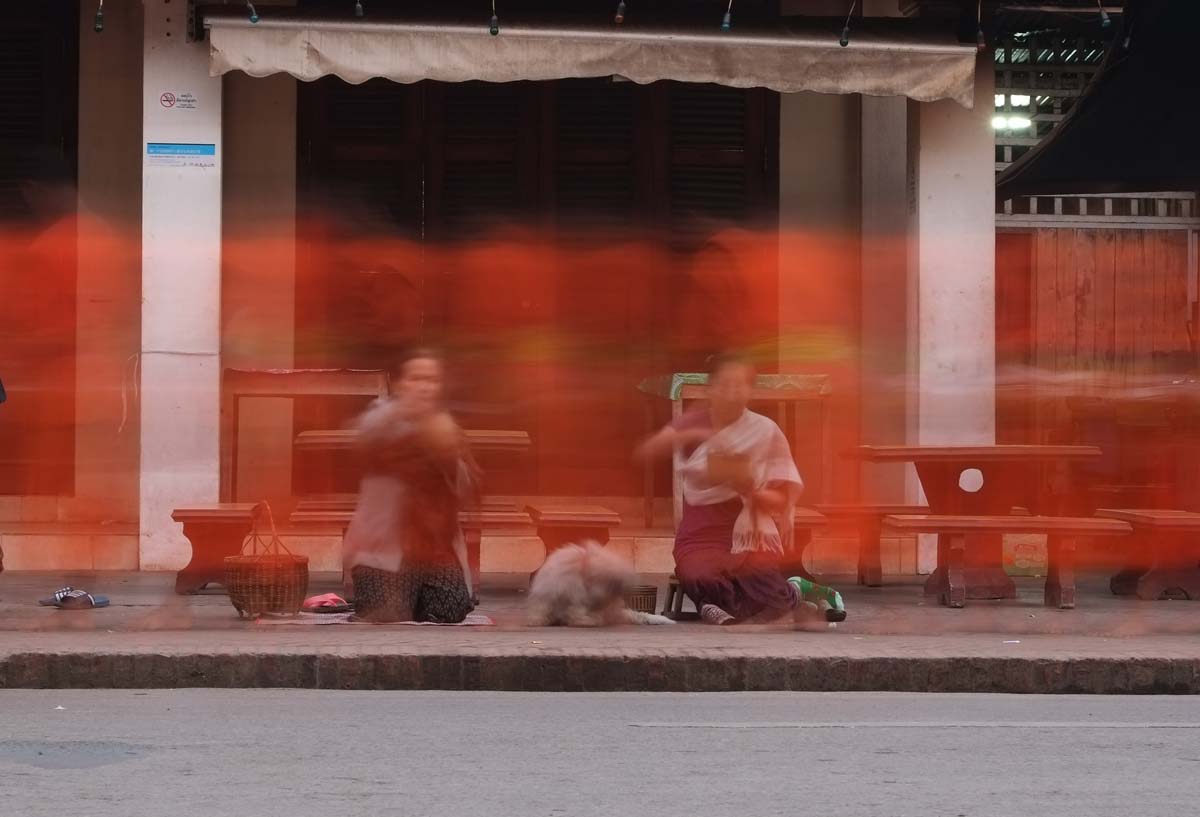 If UNESCO and Luang Prabang want to maintain the heritage of the city they really need to get a handle on this. I wouldn’t be surprised if it put some young boys off being a monk entirely. They aren’t supposed to betray emotion but behaviour like that would definitely piss me off. 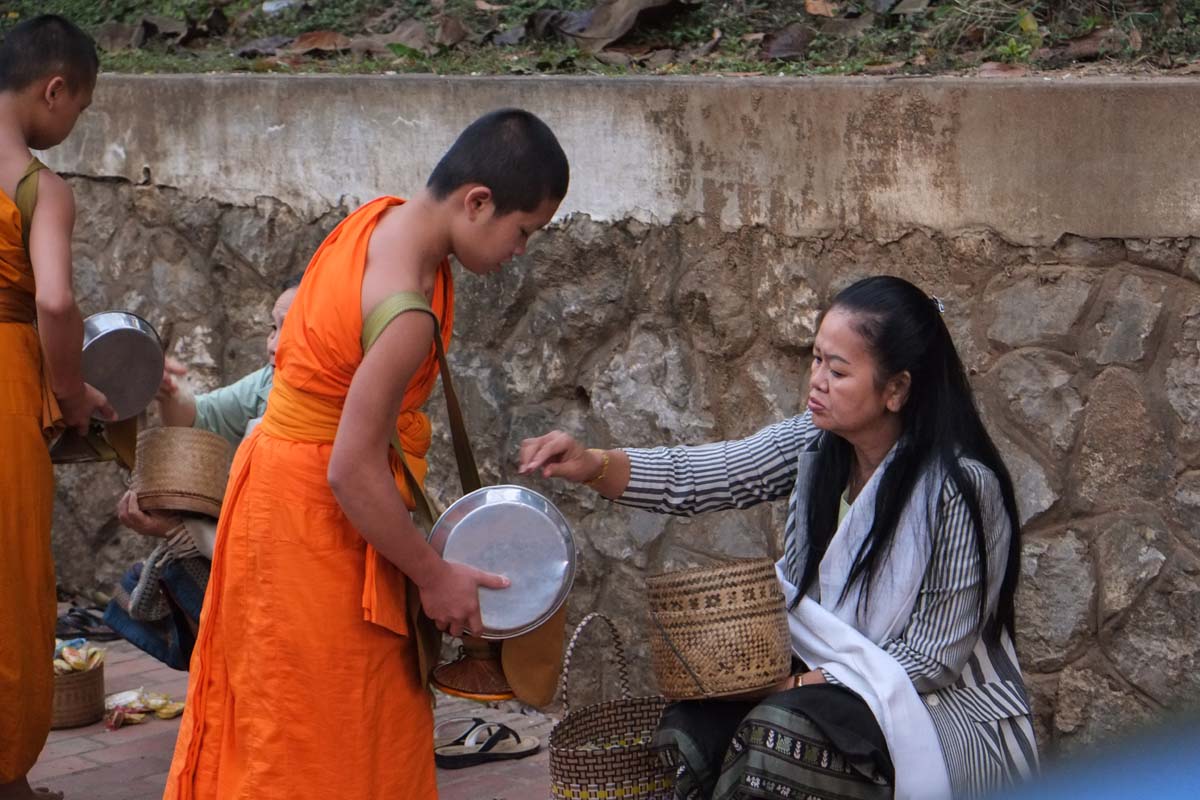 I may be being a little unfair as when we went it was Chinese New Year, therefore tourist numbers may have been extremely high. But all I can do is report what I witnessed really.

As a final note, we actually ended up seeing alms giving ceremonies twice later on in our travels, in Myanmar, and it was a much more special experience. So don’t forget, Luang Prabang isn’t the only place you can see this.