Vang Vieng is famous for two things: The beautiful scenery in which it resides, and ‘tubing’. Tubing involves renting a large rubber tube, being dropped upstream, and cruising back downriver to town stopping at various riverside bars to ensure you arrive home a lot merrier than when you started. 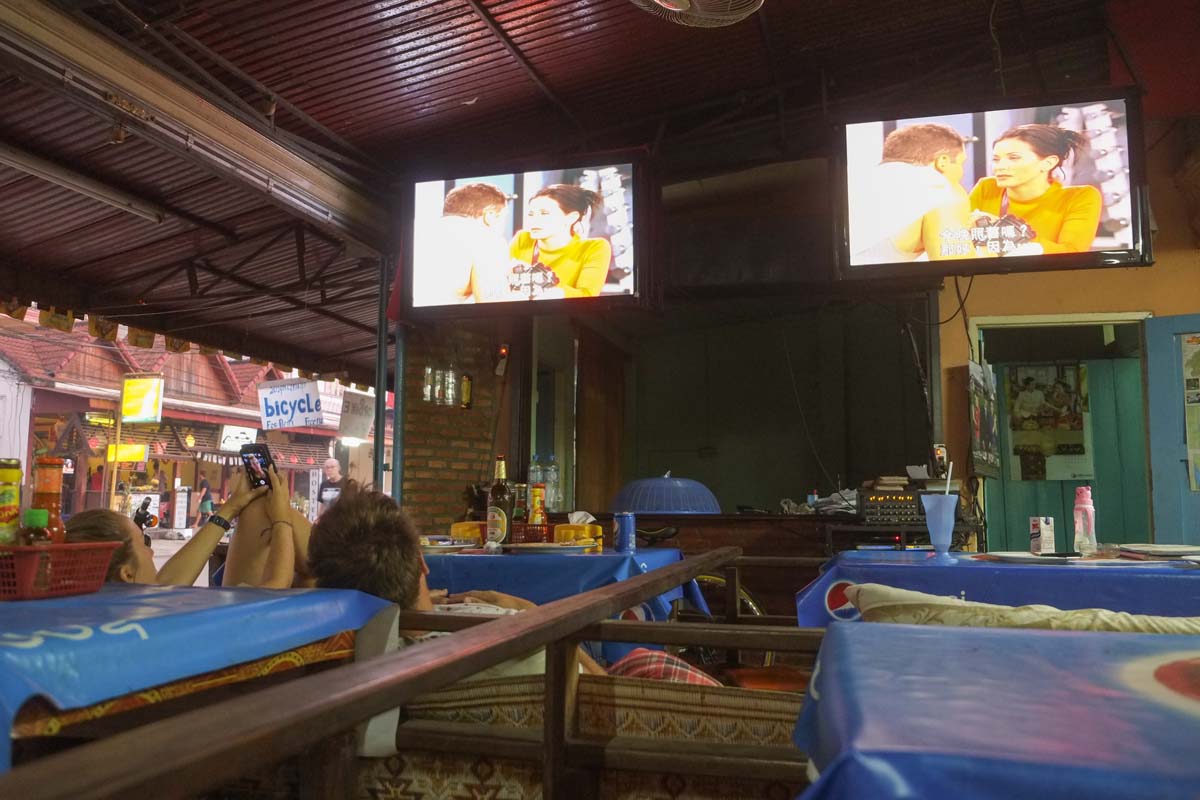 Unfortunately some dodgy food meant we didn’t get a chance to sample both of these. With only one day to spare and the urge to get shit-faced pretty low, a bike tour of the surrounding countryside was the best option.

The Vang Vieng scenery is like Ha Long Bay on land; huge limestone mountains rise suddenly from the riverside plains, complete with jungle and caves to boot. 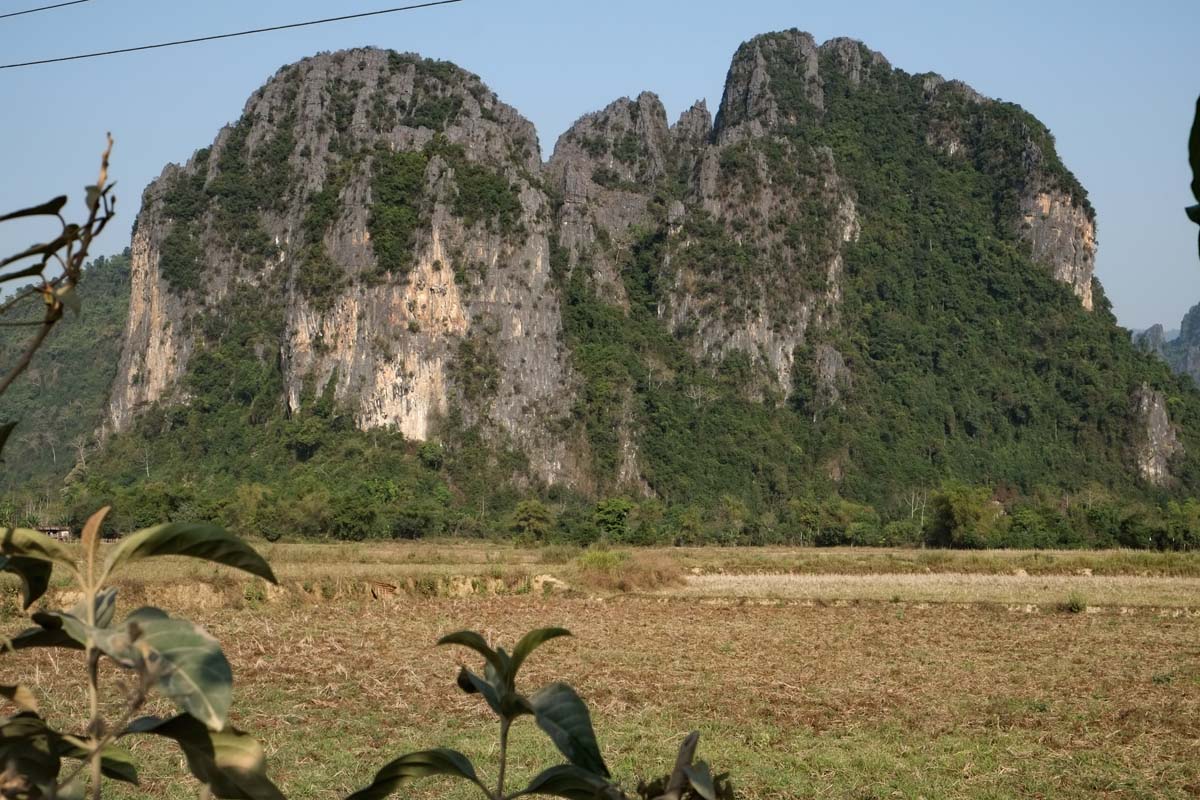 The first stop was Phou Kham cave; the most famous and accessible of the local caves. The ride was quite a slog still; the road was only barely passable for a road bike and the morning sun was already showing it’s power. We reached the first cave around 10am and paid the $3 entry. 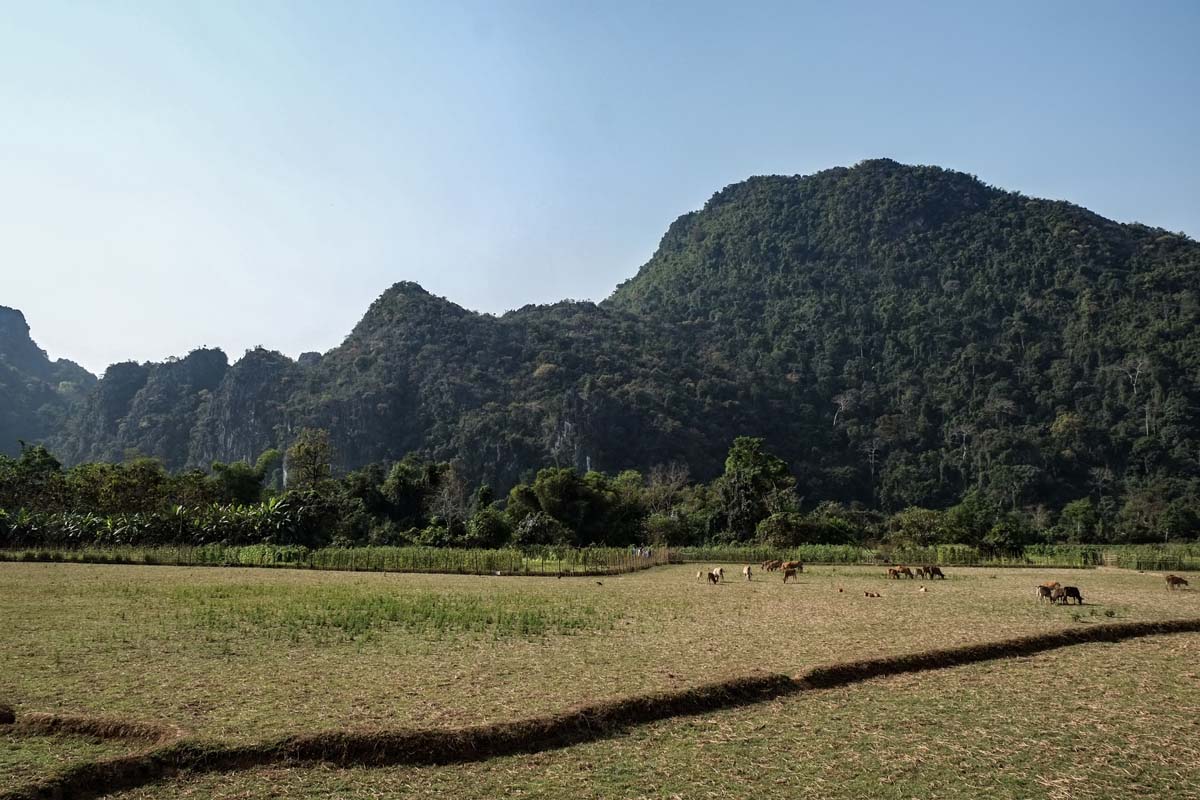 The cave has a supposed ‘lagoon’ outside for swimming but it was more of a deep pond. It was still pretty packed though and the rope swings and jumps looked a lot of fun. We passed by towards the cave and made our way up the steep climb to the entrance. 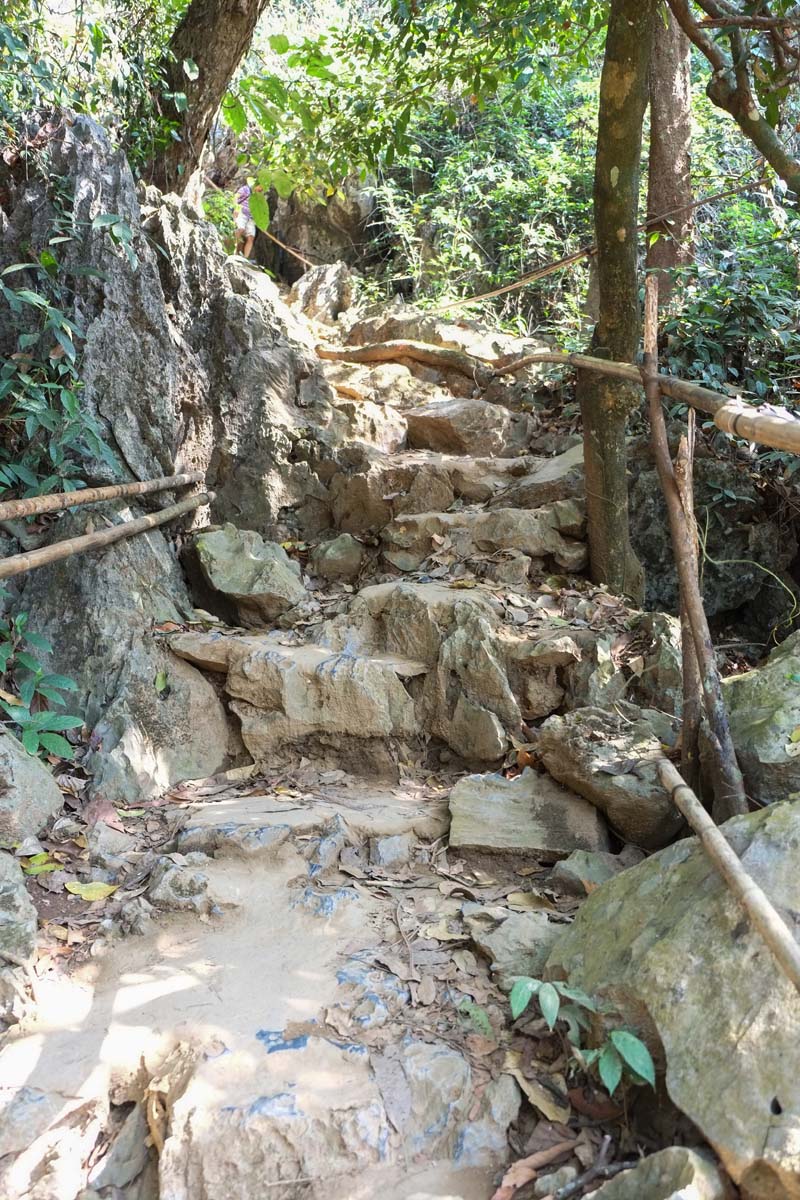 Once inside the need for torches became very apparent. The going was tricky to negotiate (and fun!) but we quickly found our way to the shrine and reclining Bhudda inside which was damn picturesque! 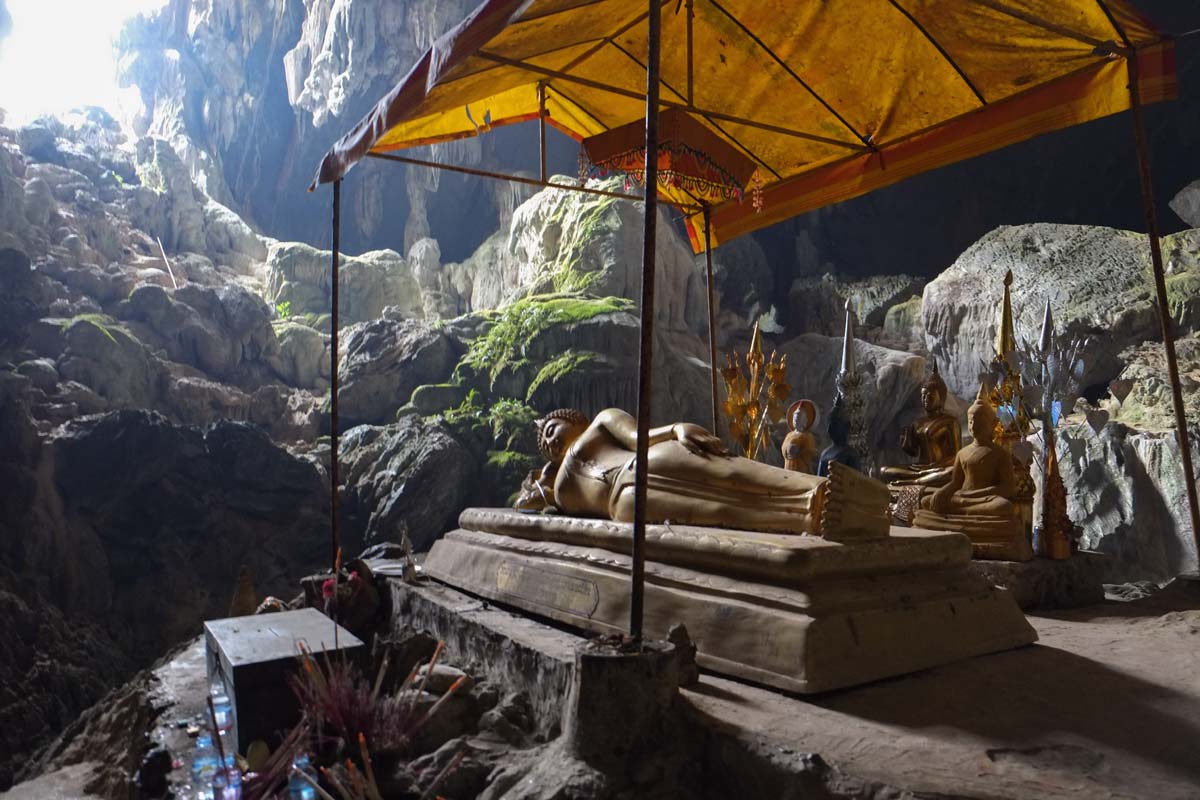 Beyond the shrine, some of the rocks had arrows and ‘to cave’ painted on them so that had to be investigated. A squeeze through some narrow rocks and passages and the cave opened up into a huge grotto – you could easily fit a house inside. As we headed further inside there were beautiful rock formations covering the sides. Photography in the pitch black was a little tricky but I tried a bit of light painting with my torch. 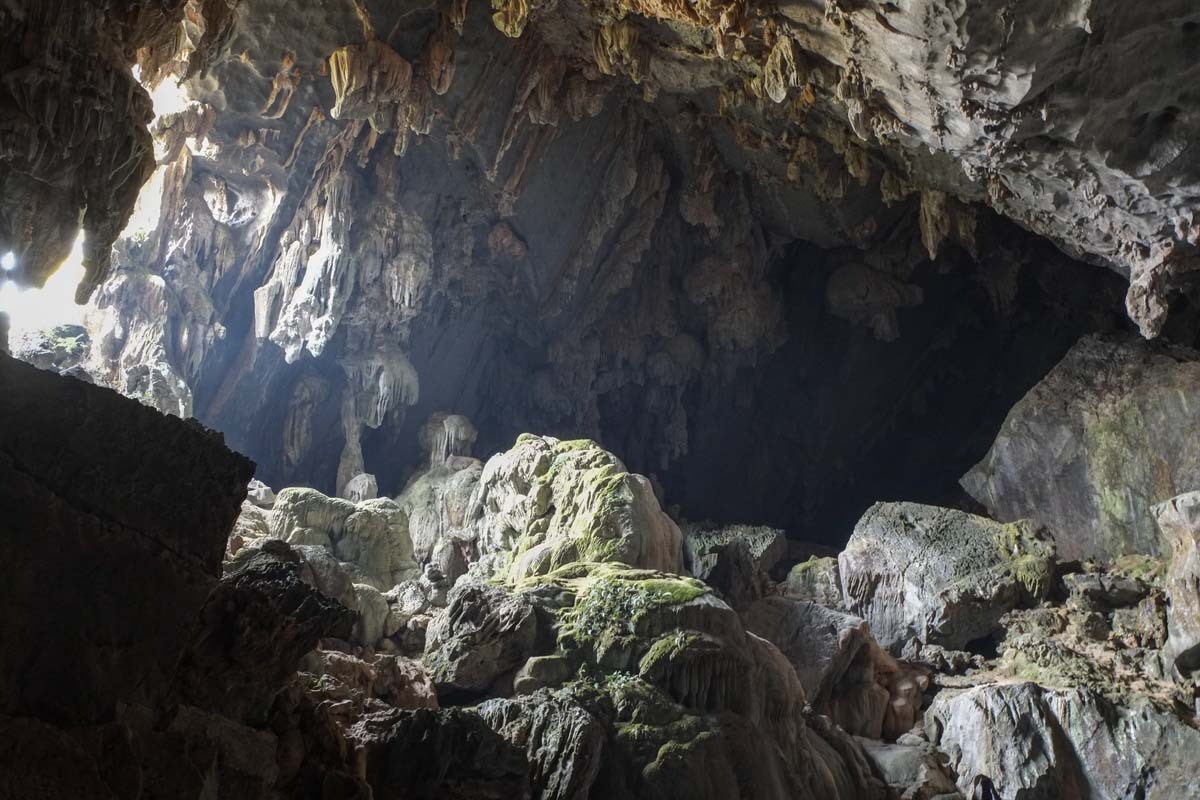 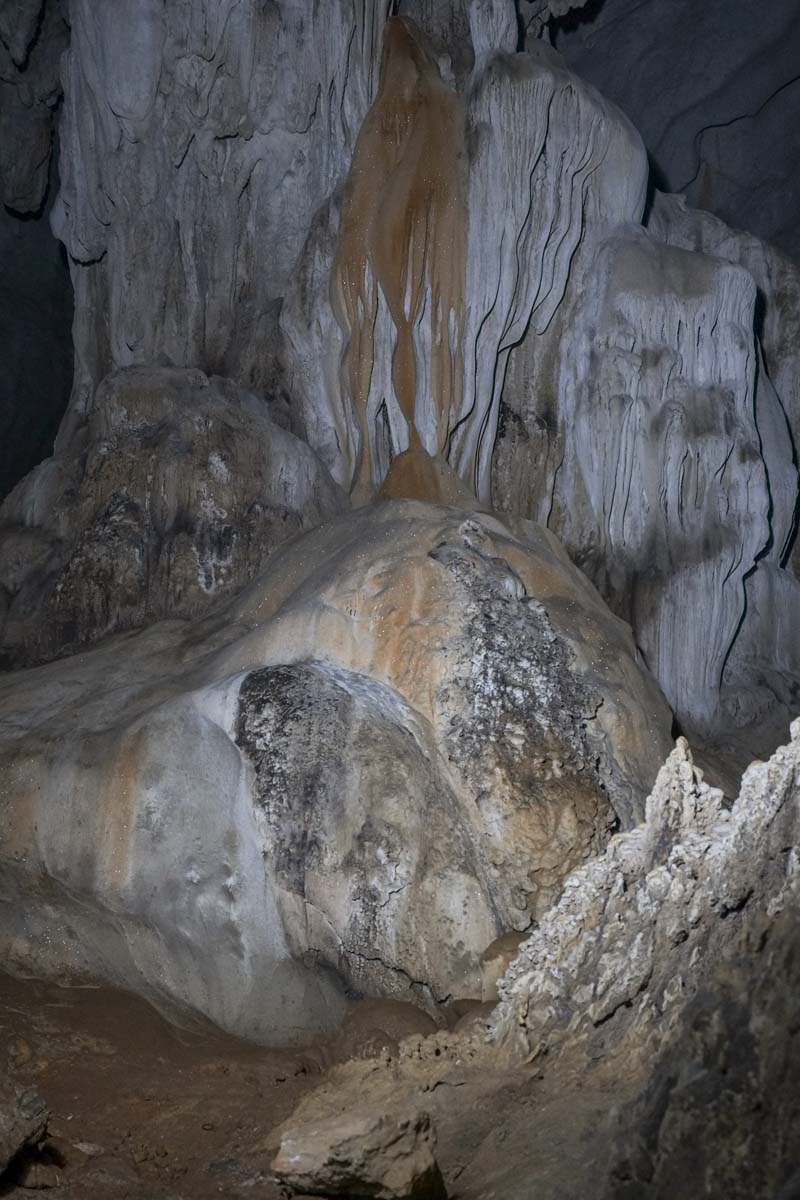 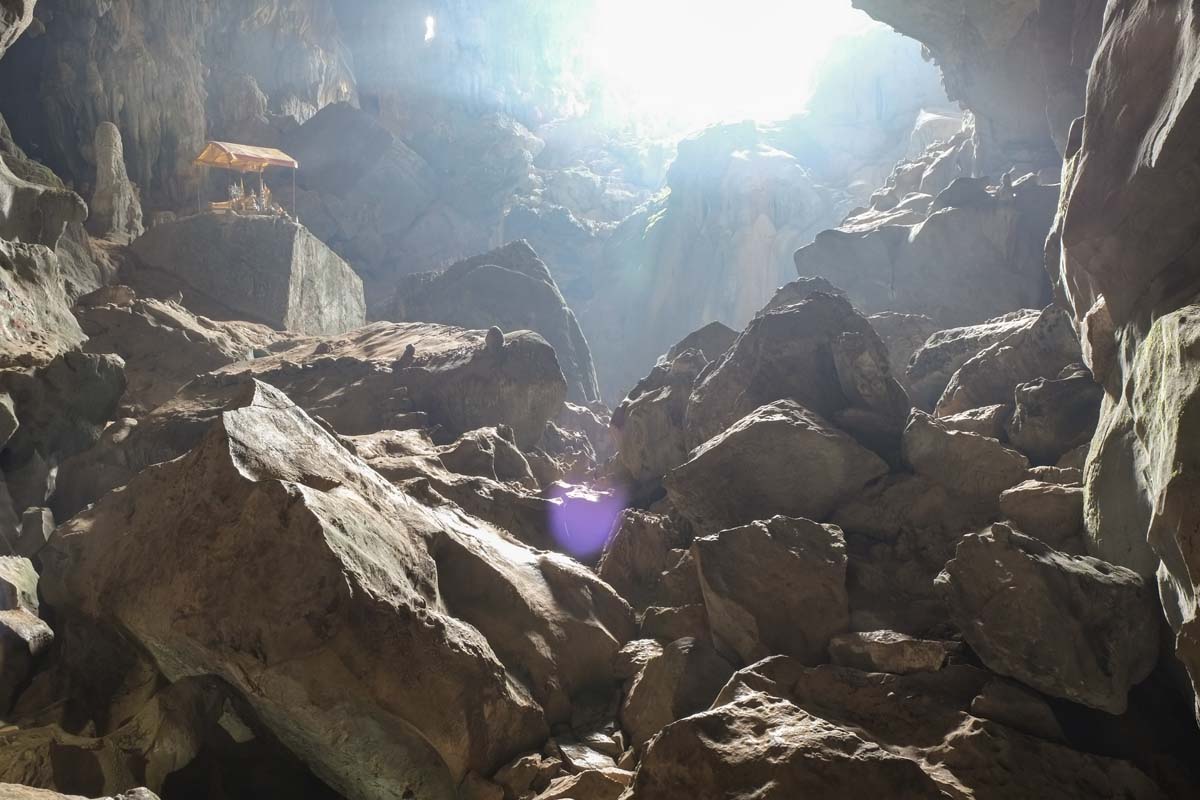 After descending back from the cave and a quick dip in the swimming hole to freshen up we were back on the road. There were a few more smaller caves around, some of which proved quite difficult to find. After a couple of wrong turns we stumbled upon the ‘Bee Cave’. The Bee Cave is named for the bees which nest under the overhang, higher up the cliff, but wasn’t much of a cave at all. 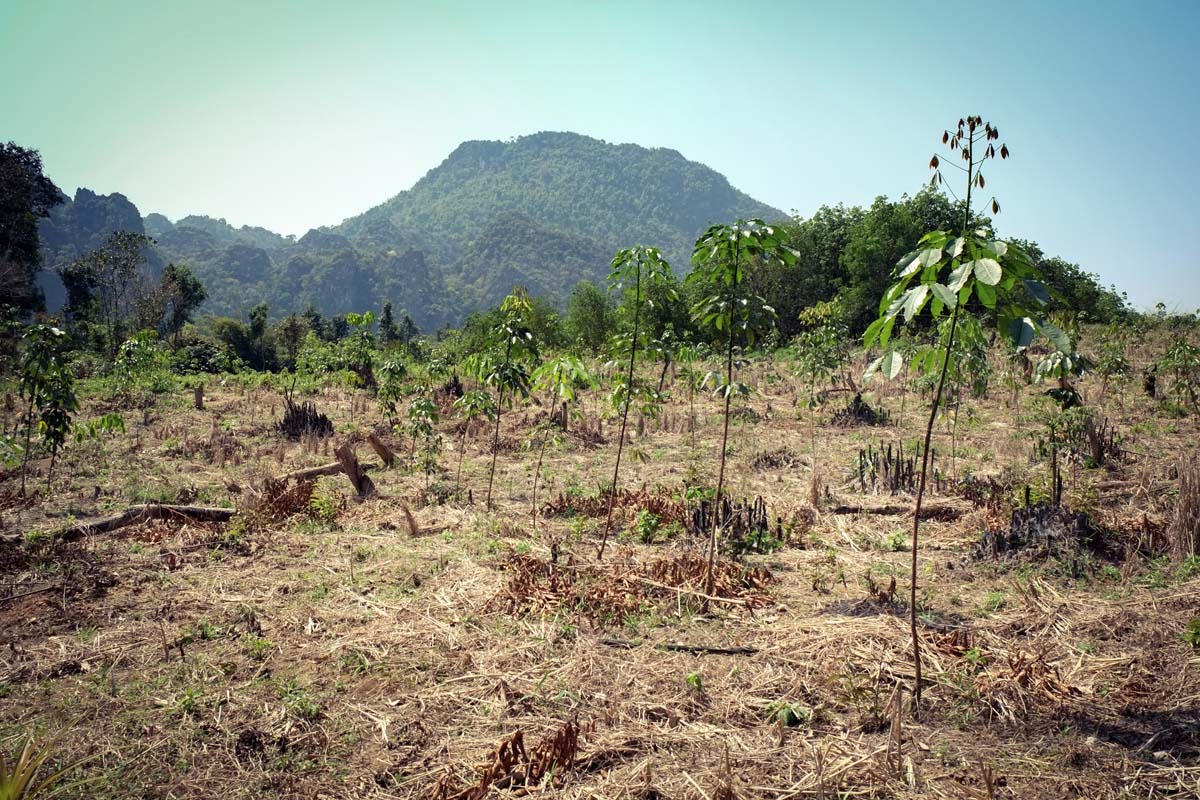 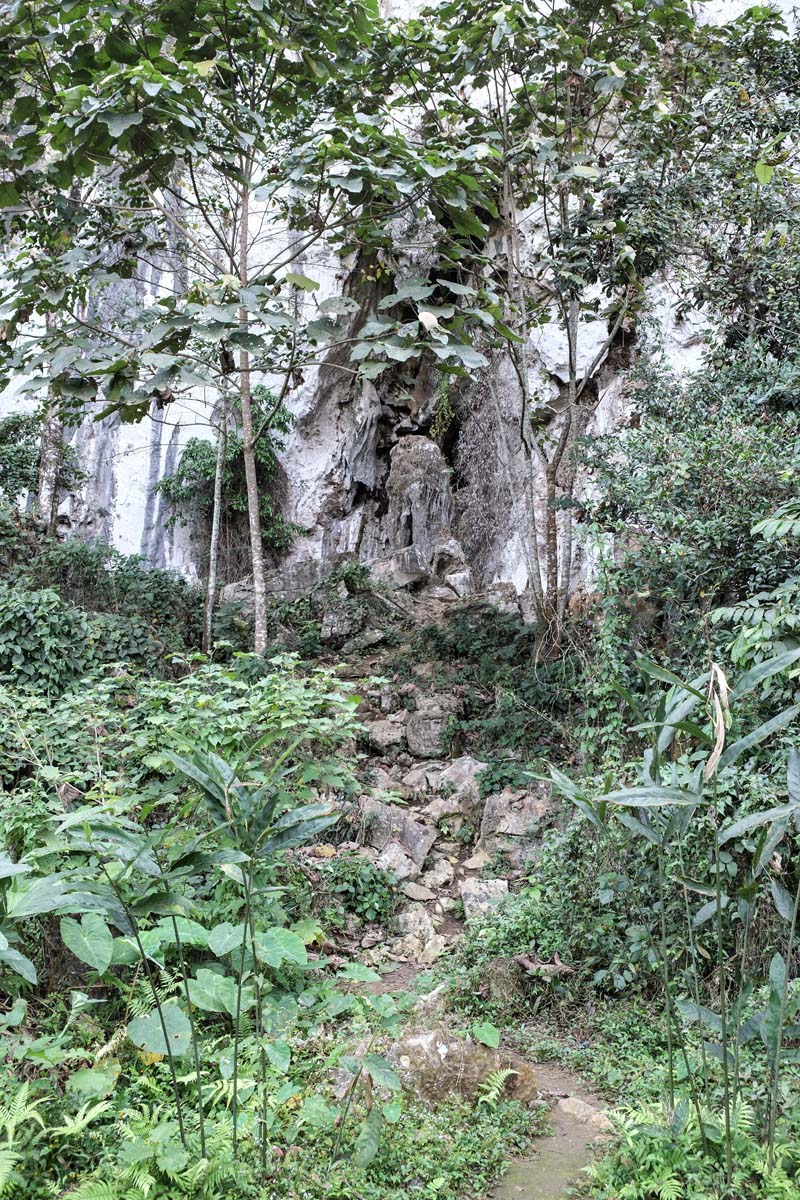 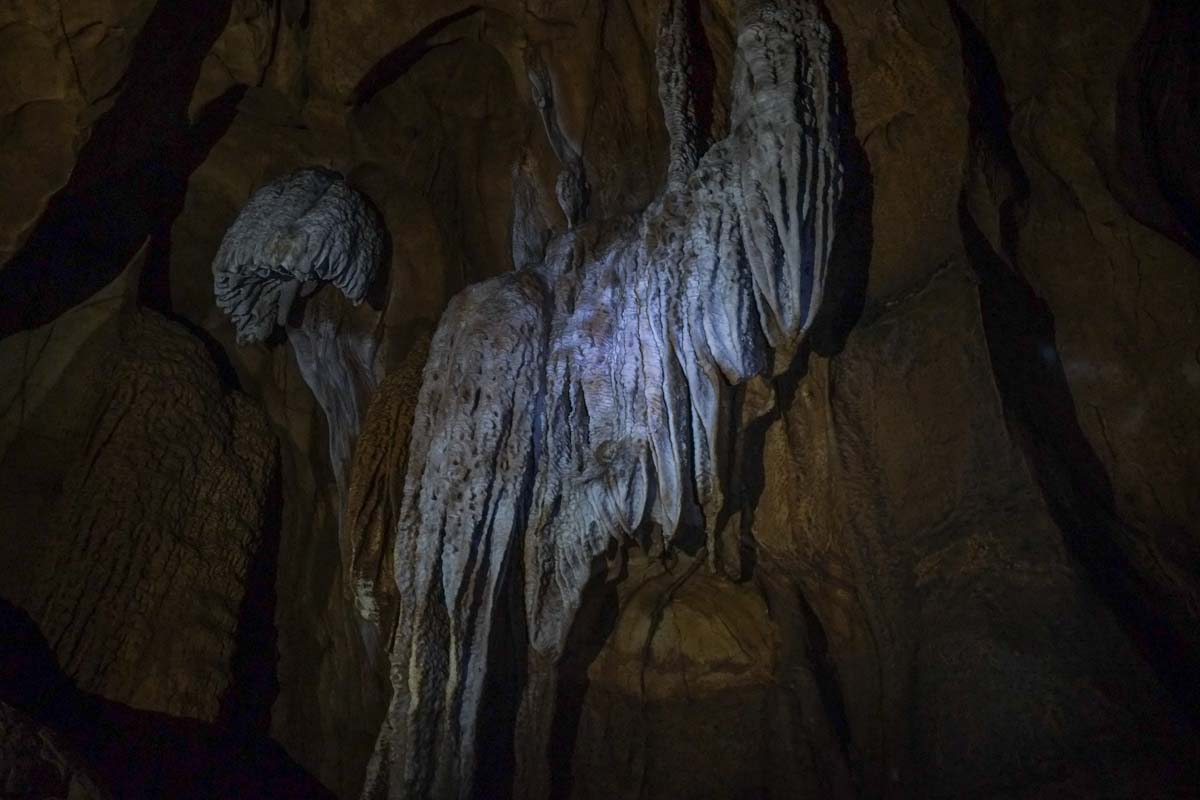 Following a couple more searches for smaller caves it was time for something different. One of the smaller karsts closer to town offered an enticing climb to a viewpoint. Again we had to pay a couple of dollars but it was well worth it. The climb took about 20 minutes, up wooden stairs, paths and some pretty steep rocks, before we clambered onto the summit. The view from the top was stunning though so it was all worth it. 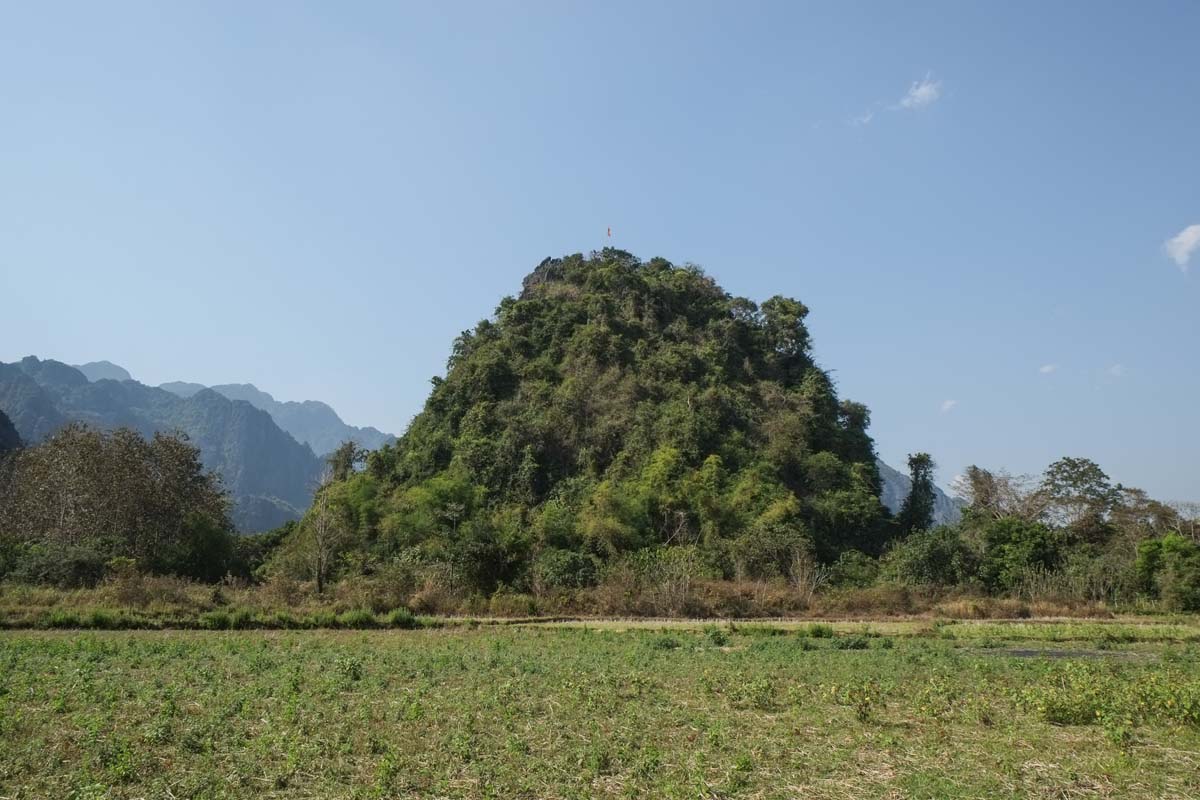 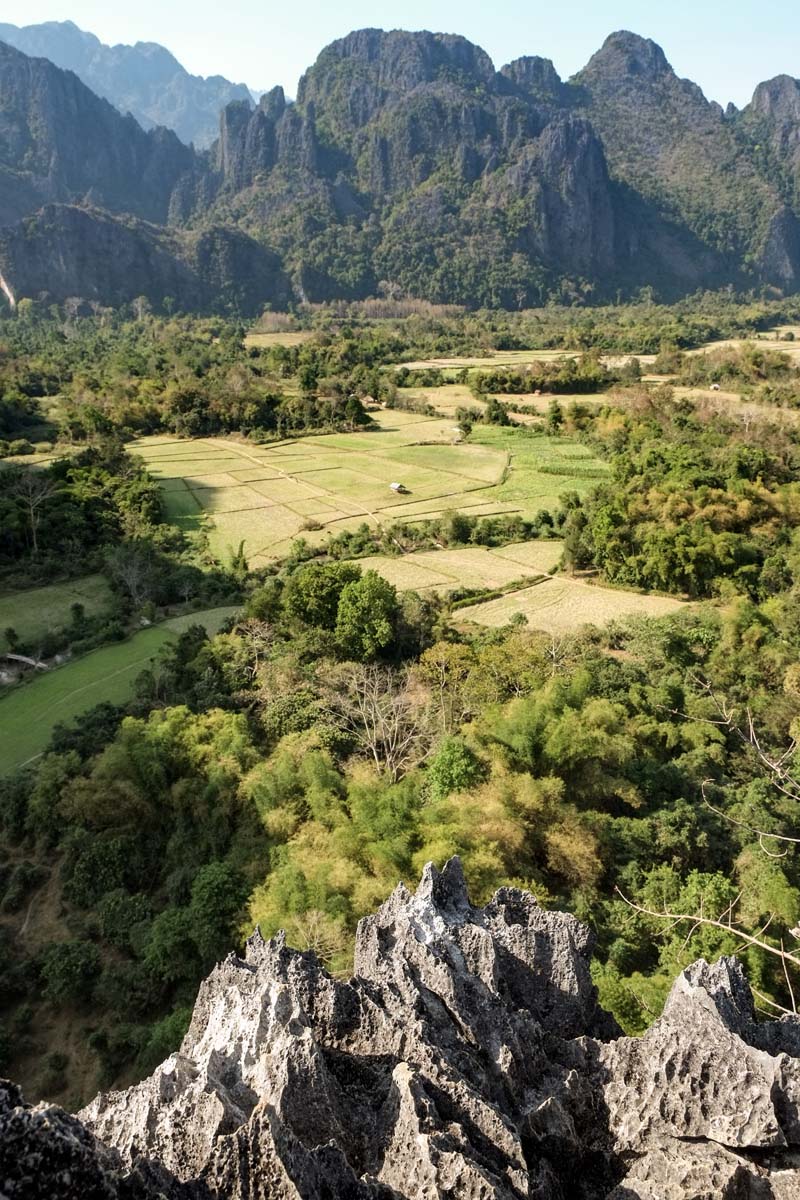 The sun was heading down as we were so we head back to our bikes and finished the bumpy ride back into town. I was a bit disappointed to not get to try the tubing in Vang Vieng but at the end of the day you can get shedded anywhere in the world, scenery and caves like these are few and far between. 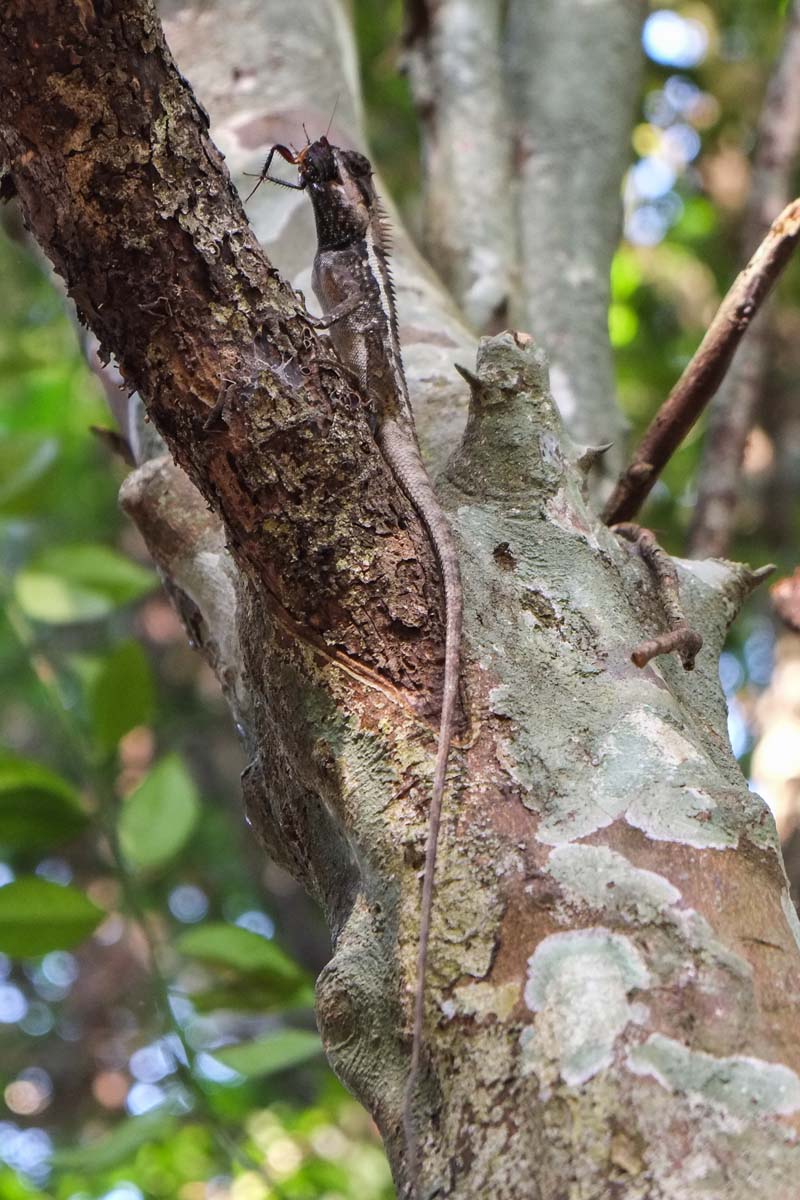